The Butler Did It (Or At Least We Hope He Will)

Send a News Tip
I was starting to get nervous there for a little while, but the Rams did what needed to be done in the end and got their man. 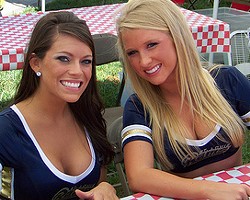 flickr.com/photos/matneym
Welcome to the team, James.
James Butler, strong safety, recently of the New York Giants, is now a Ram, and I couldn't be happier. (Well, technically, I suppose I could, but it would likely require things to happen that the Rams just aren't in control of. Although, if they were willing to loan me a member of their cheerleading squad for a while...)
Anyhow, enough of that. This is another outstanding move by the Rams' front office, who are quickly beginning to look like they might actually know what they're doing. In addition to being a very, very solid player, Butler specifically brings with him a level of familiarity with Steve Spagnuolo and his defense that should prove very helpful.

Given that Coach Spags was Butler's defensive coordinator in New York the past few years, it should be no problem for Butler to assist the other players on the Rams to learn the defensive scheme.

Couple that with his raw statistics -- which include 76 tackles (45 solo), and three interceptions in the 2008 season, the best of his career -- and you have a player whose value is tough to overstate to a team that is rebuilding from little more than scratch.
What's most exciting to me, though, is that Butler perfectly fits the mold of being an "emerging player," rather than one either already at the top of his game or on the decline. In fact, all three of the Rams' major signings this off-season -- Butler, center Jason Brown, and cornerback Ron Bartell -- fit that criteria to a T. All three are players going into what should be the best years of their careers, players who should, in fact, be better during their new contracts than they have been in the past.
It's vitally important that the Rams are signing those sorts of players because, let's face it, the Rams aren't going to turn this thing around in one season.

I know there are plenty of examples of NFL teams making a quick turnaround, with the Miami Dolphins this past season being a prime choice, but that's just not in the cards here, I don't believe.

If the Rams can get close to .500 this coming season, I'll consider it a significant victory for this new front office.

The 2010 season sounds about right to me for the Rams to get back into contention, which, again, is why it's such a big deal that these guys are all on the upswing. If your team isn't going to be good next year, you certainly don't want a player whose best years are either in the past or right now. The curve for Butler, Bartell, and Brown should reflect the Rams' curve of improvement almost perfectly.
So am I ready to christen the Rams fixed? No, not just yet. But with every move that Billy DeVaney and company make, they're proving more and more to me that this thing is back on a track to the top; all we have to do is wait for it to get there.