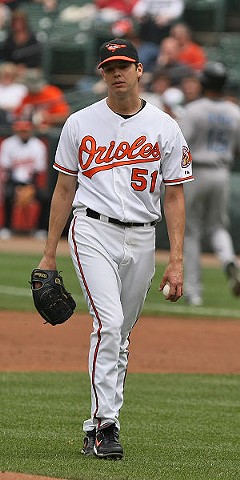 Don't feel bad about using such a goofy photo of McClellan, either.
7.80: Rich Hill's ERA in 2009 with the Baltimore Orioles.
3.38: K-Mac's ERA in 2009 with the Cardinals.
5.21: Rich Hill's FIP in 2009 with the O's.
3.96: K-Mac's FIP in 2009 with the Cards.
.343: Rich Hill's Batting Average on Balls in Play in 2009.
.275: McClellan's BABIP in 2009. (League average for pitchers is .290-.300ish)
56.5%: Rich Hill's strand percentage in 2009.
75.2%: Kyle McClellan's strand percentage in 2009.
Lots of interesting stuff here. Looking at K-Mac's performance and the underlying numbers, it's pretty clear he wasn't inordinately lucky or unlucky on balls in play, he stranded a pretty normal percentage of runners (72% is about the norm; 75% isn't high enough to really send up a red flag), and thus his FIP isn't really that far out of line from his ERA. To use quite possibly the worst sporting cliche of all time, Kyle McClellan is what he is.
Rich Hill, on the other hand, was hugely unlucky on balls in play and in stranding runners. Of course, he also gave up a fair amount of hard contact, but not enough to account for a BABIP that high. He stranded over fifteen percent less runners than the league average last year, a number which almost has to move toward the mean. (Here's a nice, fairly simple explanation of how strand rate works.) In short, Rich Hill was very, very bad last year, but he was also very, very unlucky on top of being bad. He has definite room to improve.
Hill's numbers are on the following page...
6.89: K-Mac's strikeout rate in 2009.
7.09: K-Mac's strikeout rate in 2008.
4.59: K-Mac's walk rate (per nine innings), in 2009.
3.09: K-Mac's walk rate in 2008.
1.50: McClellan's K/BB ratio in 2009.
That last number is the bad one. Actually, that's not quite true. All those numbers are the bad ones, but the last one is the really bad one. A pitcher who strikes out less than seven men per nine innings simply cannot afford to walk as many hitters as McClellan does. Even worse, pitchers usually see their strikeout rates fall when they move from the bullpen to the starting rotation. (There's also usually an increase in walk rate, but not as dramatic.) In other words, there's a pretty good chance if McClellan pitches exactly as well as he did in 2009 - which is probably a tad optimistic, truth be told - moving from the bullpen to the rotation could very well bring his K/BB rate very close to even.
7.18: Rich Hill's K rate in 2009.
6.24: Rich Hill's walk rate in 2009.
1.15: Rich Hill's K/BB in 2009.
Wow, that's much worse. Really nothing more to be said about that. Well, one thing: Hill has been a starter throughout his major league career, so there's no bullpen to rotation bump we have to factor in.
0: Number of shoulder surgeries Kyle McClellan has had.
1: Number of shoulder surgeries for Rich Hill.
That may be the bottom line right there. In the end, the biggest and scariest question with Rich Hill is the health of his shoulder. We here in St. Louis know all too well what shoulder injuries can do to a pitcher's career; some say late at night you can still hear the Ghost of Mark Mulder moaning about his missing arm slot in the halls of Busch Stadium. Still, it isn't as if McClellan's health record is spotless, either; elbows aren't nearly as worrisome, though.
So what do I think? I think the idea of Kyle McClellan in the starting rotation scares the living hell out of me. I just don't believe he's got the stuff to succeed as a starter. His strikeout rate is okay for a reliever, but if it takes even a modest tick down he's sliding into very dangerous, Brad Thompson-esque territory. Guys with low K rates can still survive, of course; Joel Pineiro proved that last year. Of course, the secret to Pineiro's success was an historically low walk rate and huge ground ball totals, neither of which K-Mac brings to the party.
I'm currently having buttons printed up with the slogan, "Rich for the Rotation: One Hill of a Good Idea!" I'll be distributing them to my friends and family and anyone else I can con into letting me pin one on them. So if you see a guy on the street with a box full of shoddily made buttons who suddenly starts accosting you about the dangers of right-handed middle relievers with bad peripherals and no out pitch, stop and say hello, won't you?