The Chatillon-DeMenil House Needs Your Help 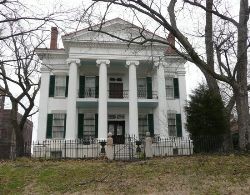 Operating a small historic house museum is never easy, even in the best of times. In the worst of times -- such as earlier this month when a a pipe burst and destroyed new carpeting and other renovations at the Chatillon-DeMenil House -- the challenges of fundraising and logistics can seem overwhelming. Last week I had the opportunity to visit the home and survey the damage with the museum's director, Lynn Josse.

But first, a bit of history about this south-city landmark:

The Chatillon-DeMenil House is one of the gems of St. Louis architecture, with its original inhabitants representing important aspects of the city's nineteenth-century history. The mansion began as a humble, four-room farmhouse with a broad porch overlooking the nearby Mississippi River. Henri Chatillon, an illiterate French American explorer born in Carondelet, built the house in 1848 after settling down from a life of guiding pioneers to Oregon. The sedentary lifestyle, as well as money problems, caused more problems than Chatillon could handle, and he soon sold the house in 1856.

The new owners, Nicolas and Sophie DeMenil, waited until after the turmoil of the Civil War to settle down in their newly purchased house, then located only yards away from the rapidly expanding Lemp Brewery. Nicolas earned his wealth from land speculation and a successful drug store. His wife, Sophie, hailed from the founding family of St. Louis, the Chouteaus. 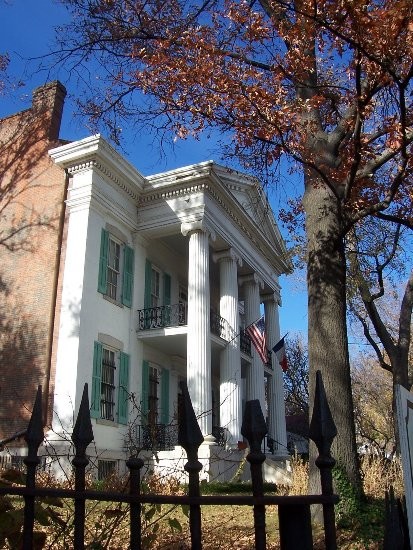 Inspired by a Chouteau relative's grand mansion in downtown St. Louis, the DeMenils set out to expand the humble farmhouse with a massive addition in the Greek Revival style. Towering ionic columns form a dramatic front porch that embraced the mansion's view of the river. Stately public rooms on the first floor provided the DeMenils with ample entertainment space. There are few houses left in the St. Louis area that preserve the Greek Revival style so well, which is what makes the house such an important component to St. Louis' architectural legacy.

The DeMenils' son, Alexander, inherited the house and was the last of the family to inhabit it before Lee Hess purchased the property in the 1940s. A consummate showman, Hess used the house as storage for his nearby Cherokee Cave attraction. (Despite local rumors, there is no entrance to the caves from the house.) When Interstate 55 came crashing through in the 1960s, the house was spared from demolition at the last second by the Landmarks Association of St. Louis, which set up the nonprofit board that still runs the museum.

Up next: Why the house needs your help.