Image via
Terry Swopes, a convicted felon, poses for Facebook.

This is Terry Swopes. A few months ago, a city jury convicted him of unlawful possession of a firearm -- four counts, all felonies.

How long should he spend behind bars? That was up to the judge.

Top secret intelligence? Not really. Swopes posted all that himself on Facebook.

The St. Louis Circuit Attorney's office now has a special "Crime Strategies Unit" tasked in part with mining social media for evidence to use against criminals. Some of the data they collect goes into sentencing memos, and within the next week or so, the Circuit Attorney is poised to start posting select memos on its website -- provided sentencing is already over and the memo is not sealed by a judge.

"The general public does not have enough info about how system truly works," says Rachel Smith, chief prosecutor of the Community Partnership Bureau inside the Circuit Attorney's office. The more they know, she says, "the more likely they are to cooperate, appear as jurors and have confidence in the system."

Yet Mary Fox, who heads the St. Louis public defender's office, says she suspects the prosecutors' real motive is to imply -- outside the formal courtroom setting -- that some sentences are too low.

"If they're not happy with the success of their sentencing arguments," says Fox, "they need to look to themselves, rather than complain about decisions the judges are making."

The unit is comprised of four or five attorneys and investigators, Smith says. She declines to get specific on how it actually gathers and analyzes info from sites like Facebook and Twitter. She does say, though, that criminals have always advertised their prowess and their goals; social media is simply their newest platform. By paying attention to it, the Circuit Attorney is simply "keeping up with the times."

In Swopes' sentencing memo, prosecutor Lauren Collins not only catalogued the offender's criminal history, which involved guilty pleas of robbery, assault, second degree murder and armed criminal action (all felonies). She also weighed in on the "defendant's character" by alleging that he is "extremely violent and has no control over his temper." 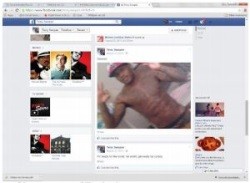 She linked Swopes to the Arlington Mob Gang and included a photo of him apparently flashing a gang sign.

"The number of guns and types of guns the defendant was in possession of is frightening," wrote Collins, who added photos of the rifles and shotgun found with Swopes when cops arrested him in July 2014. "There is no legitimate reason the defendant should be in possession of firearms with the history that he has."

Smith says that if an offender receives a suspended imposition of sentence and successfully completes probation, the site will automatically take down his or her sentencing memo. Nevertheless, Fox has expressed concern that material on the Internet tends to stick around even after removal.

"What are they going to do if a sentence gets reversed?" asks Fox. "Will they take it down then?"

The Circuit Attorney will not be posting any memos that aren't already public records and available in paper form at the courthouse downtown.

Here's an example of such a memo -- the one for Terry Swopes: