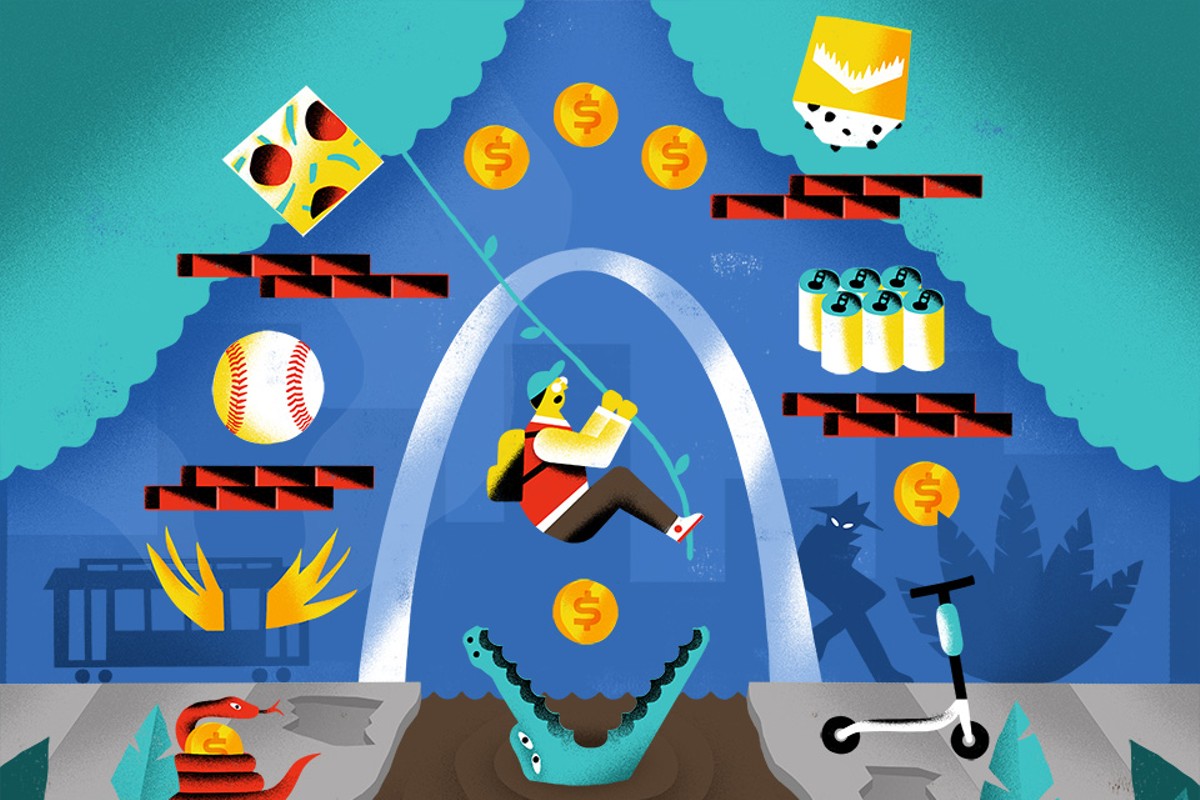 Free (and Discounted) Stuff to Do

There's no denying St. Louis freebies are some of the best in the nation. From beers to bears to balloon races, there's a ton to do in the Lou without spending a dime.

The Ghost Ride Cycle Club ([email protected]) is a free coordinated bike ride every month on the full moon. The hosts take riders to different St. Louis spots on each ride, including different monuments, parks and bars. They always end up at a secret location with a planned event. Meet the group at 7:30 p.m. at the flagpole in Tower Grove Park (4256 Magnolia Avenue, 314-771-2679) every full moon.

Forest Park is known for its free activities. Everyone will tell you that. The Saint Louis Art Museum (1 Fine Arts Drive, 314-721-0072) falls under this category; admission to the museum is a whopping $0. But there's a way to avoid paying even for the museum's ticketed exhibits, such as its current special, Sunken Cities: Egypt's Lost Worlds. The discounted price for students is usually $18, but on Fridays, those too are totally free.

Ready to show off the fact that you are finally 21? Go on a brewery tour and drink the free beer. Anheuser-Busch Brewery (1200 Lynch Street, 314-577-2626) and Schlafly Bottleworks Brewery (7260 Southwest Avenue, 314-241-2337) both offer free hour-long journeys through their respective histories and production processes. They boast free samples, too.

Prepared to spend a little? College kids also get discounts at a ton of places in town, including many theaters. The Fox Theatre (527 North Grand Boulevard, 314-534-1678) and New Line Theatre (3310 Samuel Shepard Drive, 314-773-6526) both offer those with a valid student ID "rush tickets." At New Line, students who show up five minutes before the curtain time for any performance get $10 tickets if seats are remaining. Want to see a show at the Fox? Join its email list (fabulousfox.com/email-sign-up) to get advanced notice when the theater has rush tickets available.

If you're a baseball fan or just want to eat ballpark food while the game happens nearby, the St. Louis Cardinals offer an unusual deal. For $29.99, you can go to every game at Busch Stadium (700 Clark Ave., 314-345-9600) in a month. The only catch: Tickets are standing-room only. Still, that gets you access to the Cards' new "Budweiser Terrace," which comes complete with a tavern, burger joint and plenty of party people.

If you're more into hockey, the St. Louis Blues host student nights during their regular season. Get tickets to Enterprise Center (1401 Clark Avenue, 314-622-2500) for $25. Cheaper than that? The St. Louis Symphony Orchestra (718 North Grand Boulevard, 314-533-2500) offers students tickets to select concerts for just $10. Fifty dollars will get students a five-concert subscription.

Can't get enough reading in school? Left Bank Books (399 North Euclid Avenue, 314- 367-6731) offers a host of book clubs on topics such as "Read the Resistance," "The Black Experience" and contemporary fiction. Book-club members get their club books at 20 percent off. For introverted readers, Subterranean Books (6275 Delmar Boulevard, University City; 314-862-6100) offers subscriptions at a discount. Tell 'em what you like, sign up for the three-, six- or nine-month programs (hardcover or softcover) and get a surprise book mailed to you once a month. Subby also offers a frequent reader program that's free and cardless. It keeps track of how many books you buy from them. Buy ten books and the eleventh one is free. Drop in the store or send an email to [email protected] to get started.
—Paul Friswold and Camille Respess

FLICKR/PAUL SABLEMAN
Getting around is as easy as getting an adventure pass.

Public transportation can be a college student's best friend or worst nightmare. When used smartly, it can get you around the St. Louis area for a great cost. But, for the lazy-minded, it can become a hassle. Here's what you need to know to master public transit in St. Louis.

The MetroLink
The MetroLink train system has many stops around the city and county and even into Illinois. Ticket vending machines are at each stop. It costs $78 for a monthly pass that works on the train and bus system. With a pass like this, you could easily get all around the city. A cheaper option, if you don't plan to ride all that much, is the single-day Metro Adventure Pass. It's $7.50 and works on all local trains, buses and trolleys for the 24 hours after you purchase it.

There are both red and blue lines, each with a host of stops, so pay attention to maps. Some popular stops are the airport, the Central West End, Delmar Loop, UMSL, and 8th and Pine for the Arch and Busch Stadium. Party people beware: The MetroLink stops around 1 a.m. and begins again around 5 a.m. Don't get stranded.

The train is run on an honor system. Ticket checkers can randomly board the cars to check tickets, so you don't want to throw away your ticket even after boarding. You can be charged $50 for riding without a ticket.

MetroBus
The MetroBus is also a good option but can be inconvenient because you must pay exact change when you board, unless you have a day or a month pass; credit cards are not accepted. (Fares vary; see metrostlouis.org/fares-and-passes/ for more info.) There are also many more stops for the bus compared to the MetroLink, so if you're trying to get somewhere that's not adjacent to the train tracks, the bus might be your BFF. The buses also go further out in the county than the MetroLink. Service begins at 4 a.m. and stops around midnight.

Metro Downtown Trolley
The Metro Downtown Trolley is not an actual trolley but rather a bus that costs $2 for unlimited all-day use. It stops at all the popular tourist attractions around the city — the City Museum, Ballpark Village, Citygarden, the Old Courthouse and the Enterprise Center for Blues games — with stops every twenty minutes or so. This can be a cheap option if you are going to a sports game, but it does not run 24 hours. Check online for details before making plans: rideschedules.com/schedule.html?9466.

Forest Park Trolley
The Forest Park Trolley is also a bus. It runs daily between 9 a.m. and 7 p.m. from May 1 through September 3. It connects all the popular Forest Park attractions with the Forest Park-DeBaliviere MetroLink Station. It costs $2 for a day pass and is free on Sundays. Green and blue trolleys offer differing routes.

The Loop Trolley
Don't believe what you may have seen on the cover of the city's official 2018 Visitor's Guide: Ain't no such thing.

Uber and Lyft
At long last, ride-sharing is legal in St. Louis, and within the city limits at least, super easy to catch. Just beware of surge pricing; everyone else likely had the same last call you did.
—Lexie Miller