The 'Concerned Parents' of Missouri Who Aren't Racist, Damnit 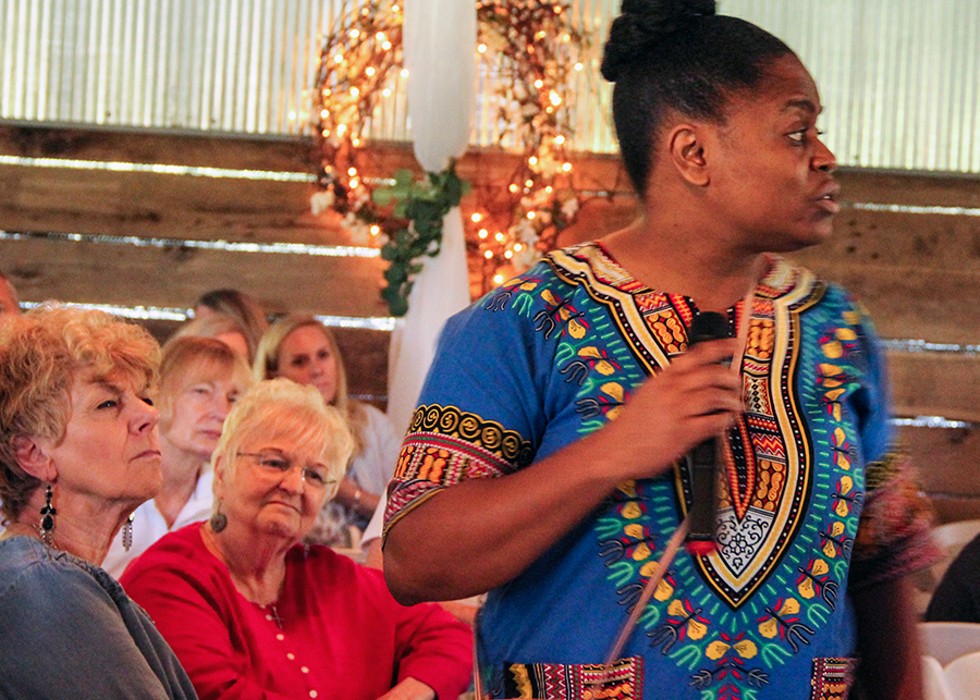 DANNY WICENTOWSKI
Charity Ikpe, a Rockwood school parent, urged the mostly white attendees at an April 30 forum to recognize that her family experiences racism, and that "white privilege is real."

Overwrought and on camera, a white Rockwood parent began her soon-to-be viral moment in a trembling voice: “Just because I do not want critical race theory taught to my children in school," she told a room filled with parents, "does not make me a racist, damnit!”

Within hours, her tearful declaration had been viewed thousands of times, the clip shared in a tweet that included a Twitter user’s two-word caption of its subject: “A racist.”

Yet, as she stood among the 200 or so attendees who had gathered on a sunny Friday for what was billed as a “community conversation” about the Rockwood School District curriculum, the majority of the room’s reaction to her outburst wasn’t mockery, but approval — and they gave her the loudest applause of the day.

In the week since the forum, its drama has been featured in multiple national publications that framed the event as yet another flashpoint in the ongoing ideological battle over how race, history and societal responsibility are taught in American classrooms.

But, in fairness, those weren't the terms being thrown around on April 30 event. Instead, speaker after speaker, including two state senators, accused the district’s teachers of inserting “indoctrination,” “Marxism” and "promoting racism against white people" into lesson plans.

It wasn’t just Rockwood. Before the “I’m not a racist” mom’s comments, another speaker rose to claim that critical race theory was “rampant” in the St. Louis suburb of Clayton. She added that her seventh-grade daughter no longer wanted to be white after learning that her skin color made her an “oppressor.”

“To me,” the parent declared, “this is child abuse.”

But to the district’s administration, teachers, and a handful of parents who showed up to the forum to support the Rockwood curriculum, the crisis is getting out of hand — and starting to get scary. Over the last two months, what began as a Facebook group of “Concerned Parents” who wanted Rockwood to reopen classrooms to in-person instruction has morphed into something even messier and more detached from reality. Instead of the COVID-19 lockdown, they’ve directed their rage at a purported conspiracy to use critical race theory to propagandize the district’s 22,000 students — of which 75 percent are white — with the goal of transforming the kids into guilt-ridden leftist activists.

But behind their fury, these parents have produced little substance to back up their concerns. And, as the forum demonstrated, declaring you aren’t a racist is one thing. Showing it is another.