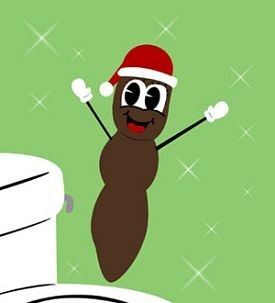 image via
Howdy ho! Daily RFT hearby nominates Mr. Hankey to star in HBO's series based on The Corrections.

How much misery can you stand with your premium cable? You may get to find out soon: HBO is preparing to order the pilot episode of a new series based on The Corrections, Jonathan Franzen's 2001 novel which chronicles a miserable half-century in the lives of the miserable members of the Lambert family of St. Jude, USA, a thinly-disguised St. Louis.

Noah Baumbach, the writer/director who has made a specialty of movies featuring miserable people (see Greenberg, Margot at the Wedding and The Squid and the Whale), is one of the series' executive producers, along with Scott Rudin and Franzen himself. Baumbach and Franzen co-wrote the pilot script, and Anthony Hopkins reportedly has expressed interest in playing the Lambert patriarch, Alfred.

While we're deeply curious about the other casting choices and whether the series will fully explore daughter Denise's eclectic sex life and older son Gary's fondness for mixed grill (a bizarre recurring motif in the novel) and if the St. Jude scenes will be shot on location here in St. Louis (and, if so, if it will generate as much excitement as when George Clooney was here for Up in the Air), we have to admit the first thought that occurred to us was this:

Will Alfred, suffering from Parkinson's-related dementia, still do battle with a giant piece of shit aboard of a cruise ship? Can it please, please, please be played by Mr. Hankey the Christmas Poo of South Park fame?