The Curious Case of Dojo Pizza

Accused of human trafficking, Loren Copp is under fire -- and in legal limbo 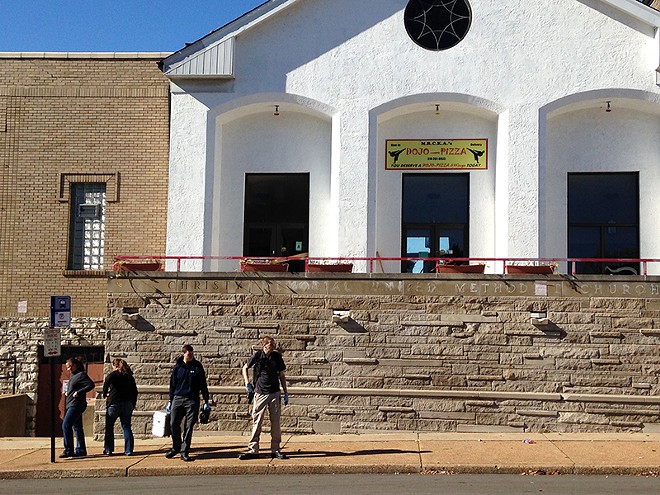 Doyle Murphy
Federal agents return to Dojo Pizza on November 12, following the first police raid in a human-trafficking investigation the month before.


On October 22, nine days after police hauled Copp away from Dojo Pizza in handcuffs, neighbors living behind the boarded-up church noticed something strange. A black sport utility vehicle pulled into the back alley, and three men in dark clothes and hoodies climbed out. The trio looked like law enforcement types to 66-year-old Cindy Duncan. Another neighbor agreed.

They watched as the men raised a ladder to the second-floor living quarters and slipped through a narrow window.

Duncan wasn't quite sure what to make of the three. When police had come before, they wore uniforms or suits and walked through the front door. She thought they might be there to seal up the window. The clear pane had fallen out a day or two before while she was working in her yard.

"It scared the crap out of me," she remembers.

But the men didn't seem to have any interest in that. She watched quietly as they descended the ladder and loaded it back in the SUV. One of them spoke, and she could just make out the words. "See you all tomorrow," he said, according to Duncan.

She didn't know what that meant either, but she didn't have to wait long figure it out.

The next morning, reporters hurried to Morgan Ford. The previous raid on Dojo Pizza hadn't made the nightly news, but now television cameras pointed at the front doors as FBI agents and Metro detectives in black vests streamed inside. The footage captured agents hauling away computers and boxes of files. Animal control officers loaded up pet cats and gerbils.

Copp, who had moved into a friend's basement in south St. Louis County, stayed away. He granted one off-camera interview to a FOX 2 reporter he knew through church, saying only, "There is no human trafficking. There is no sex trafficking of children. I haven't been charged with anything along those lines."

A warrant later obtained by Riverfront Times and other media spelled out the allegations. Detective Strong wrote in the affidavit that Copp was the target of a "Labor Trafficking and Sexual Abuse of Minors" investigation, sparked by the word of an informant. The confidential source, referred to as CS in the seven-page document, claimed children suffered from bedbugs and lice while Copp pocketed the government funds that were supposed to go toward school lunches. Instead of schooling the kids, the source claimed, Copp forced them to work in the pizza restaurant.

There was more in family court documents obtained by Riverfront Times.

"Loren Copp allegedly used to play 'the butt game' with the child in which Mr. Copp will make the child touch his butt and he chases the child and touches her butt," Juvenile Officer Kathryn Herman claimed in a petition, requesting a judge place the children in state custody.

Copp, who admits he performed acupuncture on one of the teens, was accused of poking needles into her breast — charges he emphatically denies.

Tauna Cowin was also targeted by Herman, who claimed that five of the single mom's youngest children lived at Dojo Pizza. Cowin was accused of standing by while her kids lived in filthy, dangerous conditions.

Herman asked that they be taken into foster care. "The child would be at risk for further harm if returned to the custody of the mother at this time," she concluded.

Cowin and Copp have argued in the past. She claims he has blocked her plans over the past eighteen months to reclaim her two oldest daughters, even as she's settled into a large, three-bedroom apartment north of downtown.

"I think he was trying to have the best interest for the girls, but he should have seen they should have been with their mom," she says.

But despite their differences, Cowin doesn't believe he sexually abused her daughters or forced them into some kind of pizza-shop slave labor. The family court petitions are filled with errors, including allegations her three youngest also lived at the dojo with their big sisters, Cowin says. She claims she and the kids often spent a few nights there but never lived there full time.

As proof, she points out that law enforcement agents on October 15 had to request she bring the kids to Morgan Ford from her home, so they could take them. (The three spent more than five weeks in foster care before they were suddenly allowed to return to Cowin's home on November 23.)

If investigators can't even figure who lives where, she says, how can they claim to know what was going on at the dojo?

"I think it's total BS," Cowin says of the allegations against Copp. "I think it's just somebody coming up with some cockamamie lies because they're mad at him."

More than a dozen people who spent significant amounts of time at Dojo Pizza over the years told Riverfront Times versions of the same thing. Hundreds of people have flowed through Copp's building: Customers, parents of neighborhood kids, teachers, cops, social workers and teens all visited without raising any red flags.

The nineteen-year-old boyfriend of Copp's oldest "daughter," A.E., hung out at the pizzeria most days and spent the nights talking with her on Facetime. If something had been going on, he would have seen it or she would have told him, he says.

"I'm being honest, nothing ever stood out to me as weird at all," he says.

Karen Chaney, 40, has spent most of her life living across the street from Dojo Pizza, and her twelve-year-old daughter was close friends with the girls who lived there. She credits Copp with chasing away the gangs who used to sit on the steps. She trusted him so much she allowed her daughter to stay the night.

The girls had chores and helped out around the pizza shop, but she laughs at the suggestion it rose to the level of forced labor.

"If that's the case, I must be human trafficking," Chaney deadpans. "Because I have my kids clean the house every day."