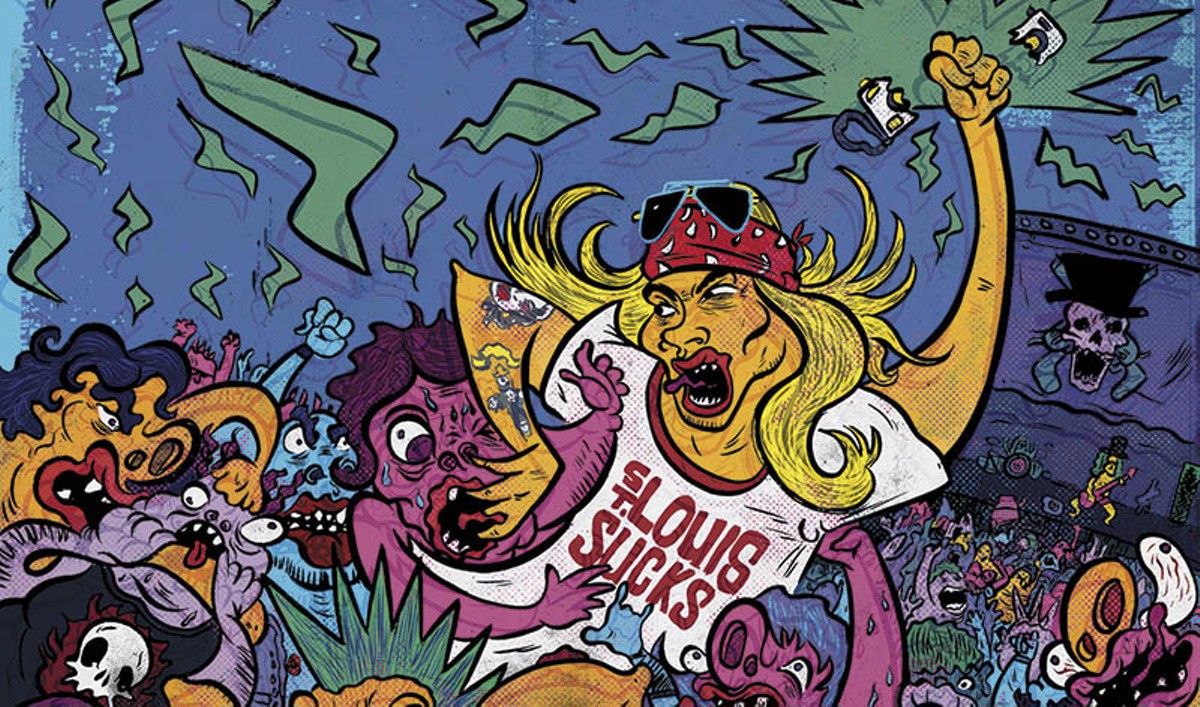 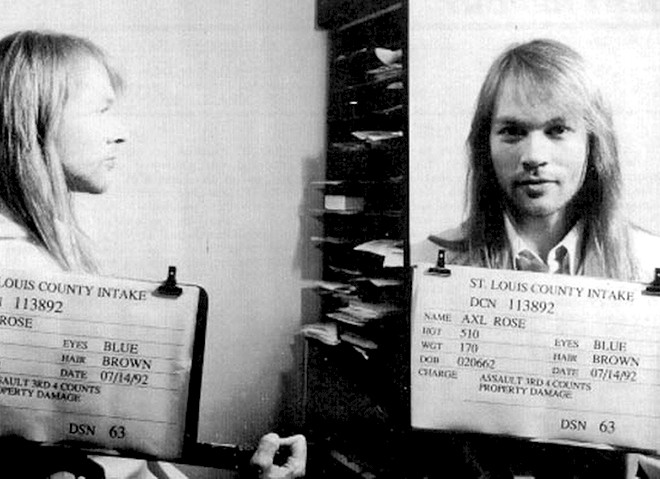 Official mugshot
After the dust settled, nearly all the blame fell on Rose.

Wright: The police told us to leave the stage and leave the area and get our staff to safety. We got a few guys hurt — five or seven of our guys ended up going to hospitals. We tried to get people to the medical building. A few of us went backstage with the police.

Favazza: I will never forget all the police cars going the other way. We all looked at each other like, "Holy shit." That was my lasting visual — sirens, lights going past us. Quite honestly, it was scary. That crowd was a bunch of drunk assholes. They love their rock, but GNR brings out the rowdy, rowdy crowd.

Schankman: Here's what we're lucky about: We had 400 police officers — Code 1000 means from anywhere you can hear it, you gotta come — and not one gun was pulled. I didn't see anyone hit with a stick. They practiced incredible restraint.

Durchholz: We were there watching them sweep everybody out. The cops rushed toward us — I may have watched too many movies from the '40s, but I yelled "We're the press! We're the press!" The cop replied, "Fuck you, cocksucker!" and shoved us down the steps. One of them jabbed Crone in the kidney with a baton. I had to take him to a first aid tent to lay down for a while. These guys were not in the mood for Clark Kent and Jimmy Olsen to be on the scene.

Crone: I was probably not as hurt as I thought I was, and also maybe hurt more than I thought, if that makes any sense. My adrenaline was on such a rush that I don't even know how hard I got hit.

"For the last few days, I'm watching CNN and reading this shit in the St. Louis papers about how I incited a riot, and they're talking about 'And in the band they have a recovering heroin addict...' What the fuck does that have to do with St. Louis?" — Axl Rose on-stage in Dallas, Texas, July 8, 1991

The riot became international news. MTV News quickly appeared at the venue and interviewed show-goers, and press clippings from USA Today, Entertainment Weekly and other outlets spread the story.

Durchholz: I just burned up my Rolodex and called everyone I knew — MTV News, Rolling Stone. That's a bit of the way of how the story got out. I wound up telling the story in other media before I could tell it in the paper I wrote for.

Feraro: We happened to be where MTV was interviewing people. My brothers put a VCR tape in and maybe a couple months later, my mom accidentally taped over it with a soap opera. I was so pissed.

Favazza: After that, the guy that was on the air [that night, on KSHE] — Jim Ellis, who's dead now — Axl called in to give his side of the story. Good old Jim didn't record it. I don't think Jim realized what had happened an hour or two beforehand.

Schankman: Next thing we heard was him reporting on KSHE how the promoters didn't know what they were doing. I promoted my first concert in '69 — this was '91. I had probably done 10,000 shows. I think I know what I was doing. But I can't control an act jumping off the stage. 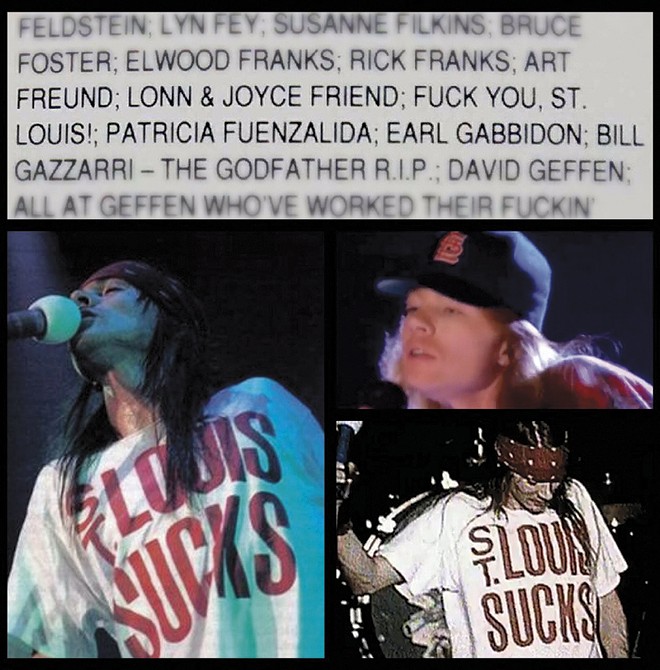 Art by Jaime Lees
Axl Rose wasn't exactly subtle about his distaste for St. Louis after the riot.

"I'm saying, yeah, I jumped off-stage and, yeah, things went haywire after that, and maybe I could have handled it better or whatever, but no one was really handling anything at that point. So I took it into my own hands with what I could do ... because I had been pretty much pushed to the limit by their lack of security. But I don't see anybody else in St. Louis really taking any responsibility for anything that happened." — Axl Rose, interview with MTV's Kurt Loder, July 12, 1992

After the dust settled, nearly all the blame fell on Rose. Contemporary filed a lawsuit claiming destruction of property. Stephenson filed suit too, seeking more than $2 million in damages over injuries to his back and ear. Twenty additional personal injury claims were levied against Rose by other show-goers.

Durchholz: The thing that touched off the powder keg was Axl's reaction to that specific moment. If he hadn't reacted so strongly to Stump taking a picture of him — if it hadn't happened in that way, I don't think it would have unfolded as it did. I lay the fault of the whole thing at Axl's feet.

Pollard: It certainly turned me off of arena shows, to sit outside and get sunburned for someone to get sand in their pussy and leave the stage.

Bahan: I was grounded for the whole rest of the summer. That was the last time I ever saw that girl. I always say that Axl Rose, he took it all away from me: I lost my girl, I lost my freedom, and I lost my innocence. I broke property and brought it home, all to be thrown in the waste basket. I did go back out the next day and took the bolts off it. I kept those.

Schankman: There was no doubt in my mind. I know exactly whose fault it was. We didn't start the problem and we certainly didn't start a riot. The big damages were the millions of dollars we sued them for, which had to do with defamation of character. He kept spouting off in all the trade magazines that we're a new facility and the security didn't know what they were doing. So the real loss was in that. And it got settled several years later for an undisclosed sum, but it was seven figures.

Wright: I would lay most of it at the feet of Axl for being an artist and leaving the stage. He had professionals that should have handled that for him. I think at the time they were touring with four security body guards and his security was really good back then. At the same time, on the road when you work for someone like that, you don't question them a lot.

Feraro: He's had other riots he could have prevented, where he's walked off the stage. He's been a dick in his shows. It's like, "Come on, man. Because someone threw a bottle you're gonna incite a riot over it?" The guy is a huge, epic tool. He is very talented at controlling, not only entertaining — the guy has a lot of power in his performance. That just doesn't go into his performance; that's in his presence. People are fixated on him. He draws huge reactions from people in the audience.

Schankman: He's not Axl Rose, he's Bill Bailey. He's putting on a show, he has a costume on. And I think it was entertaining. I was entertained. I don't think there's anything wrong with his talent.

On March 24, 2016, Guns N' Roses released a teaser video promoting an upcoming reunion tour. It included a promised show in St. Louis. Later promotional materials for the tour made no mention of the city.

Favazza: They owe us a show; they were gonna come here up until a few months ago. The day the shit broke, we had been promoting the fact that GNR was coming — they had it on their video teaser. They were gonna play the [Edward Jones] Dome, and we were all ready to announce. Some people never believed that GNR would ever play here. I was texting Richard [Fortus, St. Louis native and longtime GNR guitarist] back and forth. He said Axl would do a show here; they said they want to make it the last show on the tour, just to make it up and close that wound.

Durchholz: It was one of the first shows at Riverport. I think that added to a lot of the drama surrounding it. St. Louis has never had a venue like that, and was this the new normal now? Obviously it wasn't, but I think it gave everyone pause. I think it gave the guys at Contemporary who had built Riverport heart attacks. Is this the kind of of thing that was gonna happen?

Stickley: I think I was more sad than anything. I wanted to see the show and at that age, even more than now, I looked up to rock & rollers and it just seemed in bad taste even then. I also look back now and think, these adults who were rioting were most likely intoxicated. Back then I didn't have any concept of what it meant to be inebriated to the point that you would do things you wouldn't do normally.

Schankman: I think it hurt his career; I think it was the beginning of the downfall of his career. I think he had to pay some of the money to his insurance company. The settlement was a multi-million dollar settlement. It could have gone either way; we could have gone down, but we went up to become one of the biggest amphitheaters in the country.

In October 1993, After three weeks of trial, Stephenson and Rose settled for an undisclosed sum; Rose was quoted in the Post-Dispatch calling it a "very minimal figure."

Stephenson: I asked my lawyer, "Is this done and over with now?" and he said, "Yeah." So I grabbed my book up with my photos of [Axl] — I said, "I'm going over to get my autograph 'cause he owes me an autograph." I walked over to the table and all the news media people were around him. I set my book down in front of him and said, "I think you should autograph this picture." He just looked at me, like, "Are you crazy?" It's people like me that buy your albums and come to your shows and put you where you're at. I think you got a little bit away from where you came from.

Durchholz: Let's think about the absurdity of how it looks from the modern perspective: A guy in the audience had a camera. Now, there's no way to stop people from taking photos.