The Exhausting Prosecution of the Rev. Darryl Gray 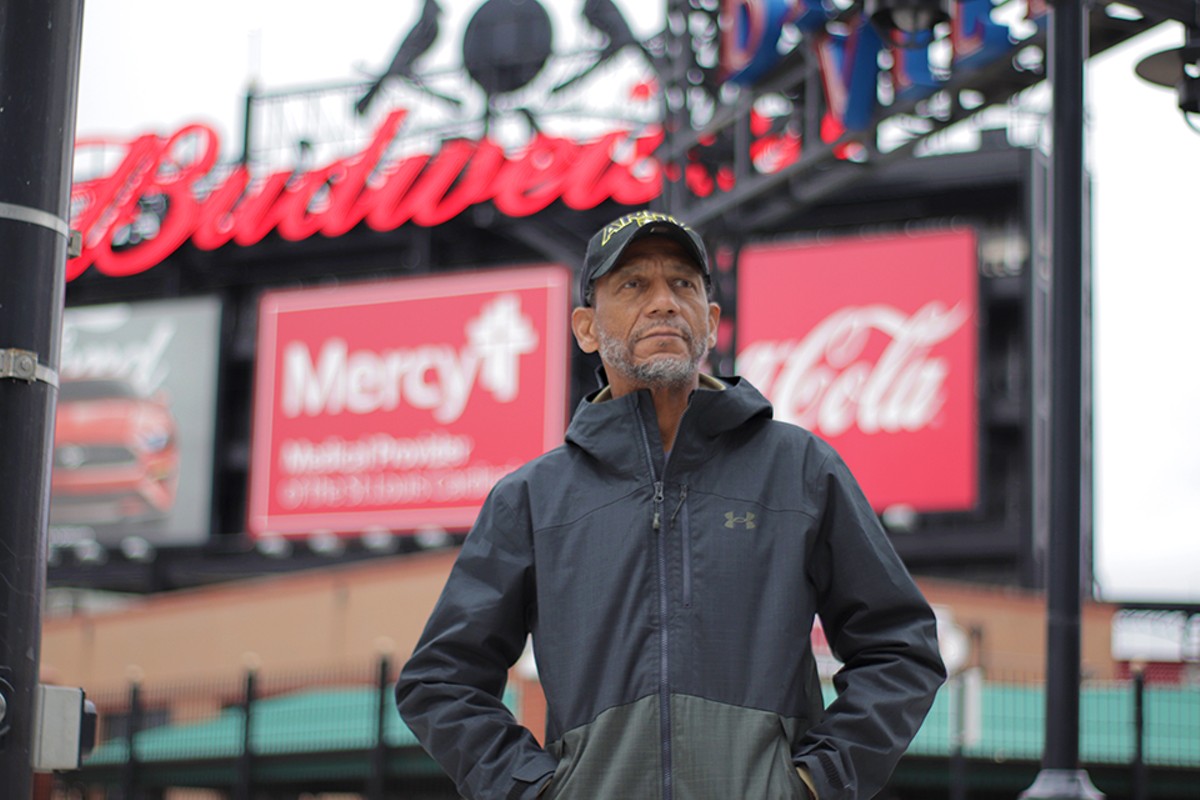 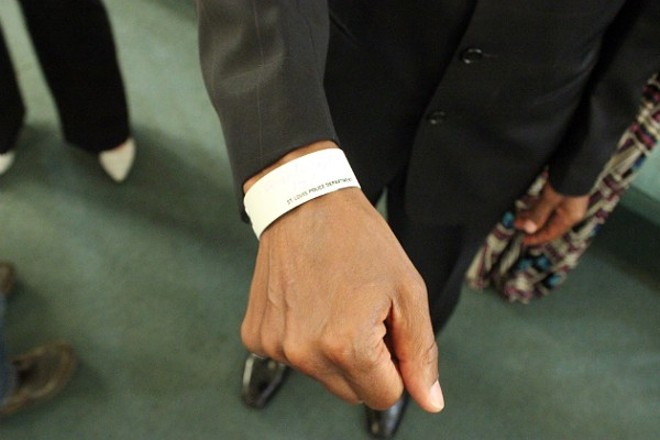 DOYLE MURPHY
The Rev. Darryl Gray wore the ID bracelet from his arrest for days after the incident.

The case against the Rev. Darryl Gray and Calvin Kennedy rests in large part on the word of police officers involved in the takedown.

In his police report, Detective Ronald Vaughan described the confrontation leading up to Gray's arrest much differently than the pastors. He wrote that cars were backing up on Walnut Street behind three people in the intersection and that he and other officers "respectfully asked for the three subjects (two of which were females) to exit the roadway ... "

"As I was making an ushering motion with my arm to continue their movement toward South Broadway (no contact), I continued politely asking the three to move out of the roadway. At this time I was met by a subject, who was later identified as Darryl G., who stated he did not like the way my arm was motioning the 'ladies,' out of the roadway and how I was talking to them. I informed Darryl G. I was speaking to them in a polite manner and just asking them to exit the roadway."

In Vaughan's telling, Gray rushed him and he was forced to react in self defense: "Fearing for my immediate safety, I placed my hand out to stop his advancements and he pushed into my hand with his chest and began shouting in my face. Upon making contact with my hand, Darryl G. two-handed pushed me in the chest causing me to fall off balance backwards. As I was re-gaining my balance, I discharged one burst of department issued pepper spray to his face to stop his attack and to assist in affecting his arrest."

Gray and other clergy there that night scoffed at the idea that he was the aggressor or in any way a threat to a line of police officers who were all larger, armed and more than 30 years younger than the rail-thin pastor. The cop who body-slammed Gray was 31-year-old Larry Wentzel, a former college All-American defensive lineman who was listed at six foot two, 240 pounds during his playing days at Missouri Valley College.

"I'm 150 pounds, 63 years old [at the time], wearing my clergy collar," Gray says, adding that he wasn't a stranger to police. "I'm one of the most recognizable protest leaders out there. They know me."

Vaughan wrote that Kennedy shoved him in the back while they were making the arrest and then fought with Detective Kyle Chandler, who had chased him down. Vaughan pepper sprayed Kennedy — and Chandler, by accident — in the face during the struggle and then tased him.

A video from the arrests that night shows Gray immediately before his arrest, but he walks out of the frame. The camera soon pans over and finds the pastor again as Wentzel lifts and slams him. The video then shows Kennedy collide with Vaughan and run, struggling and failing to get away from Chandler as he is pepper sprayed and shocked with the stun gun.

Whatever happened in the gap between Gray walking out of frame and Wentzel's tackle happened within a few seconds, casting doubt on Vaughan's description of a polite conversation leading up to the takedown.

"It's insane," Khazaeli says. "It's just an insane description of what happened. It's utterly illogical."

Vaughan's report goes on to describe other protesters swarming in, "advancing toward us on all sides shouting profanities and advancing in a menacing manner. Observing this, Detective William Olsten, DSN 7866, discharged his department issued pepper spray to disperse the group from converging on us all."

There are at least two videos of that, and they show Olsten jawing with one protester, taunting the man with, "Come fuck me up then," as other officers try to usher him away. Olsten then blitzed everyone in range with pepper spray, sweeping a long arc across the crowd.

In the end, he ended up like Gray, in that he is one of the few people still dealing with the repercussions of that night. He was indicted in state court with felony assault and has been terminated by the police department. His charges are still pending. 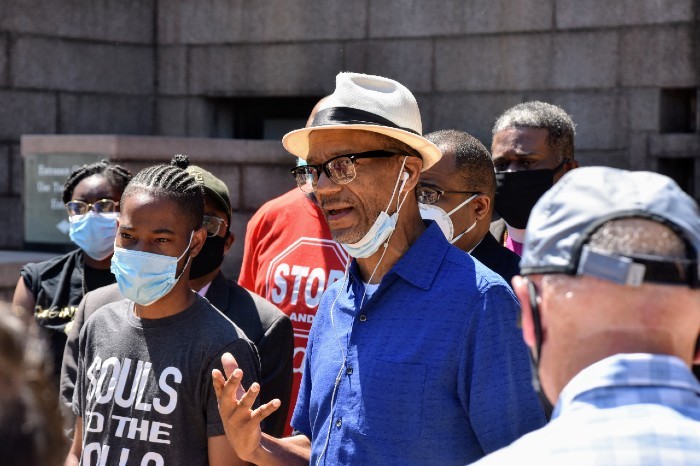 DOYLE MURPHY
Gray, pictured with Rep. Rasheen Aldridge, has continued to speak out.

More than two dozen people have filed federal civil suits against police and the City of St. Louis in cases tied to the 2017 Stockley protests.

Six of those are from the clash outside Busch Stadium and include suits filed on behalf of the Rev. Darryl Gray and Calvin Kennedy. The lawsuits detail a history of incidents in which city police responded to protests with tear gas and too much force. The list includes a protest in 2015 in response to police killing a Black eighteen-year-old name Mansur Ball-Bey. Officers serving a warrant at a house in Fountain Park claimed Ball-Bey ran out of the back with a gun and pointed it at police before he was shot to death. An autopsy revealed he had been shot once in the back.

The two officers who fired on Ball-Bey were Ronald Vaughan and Kyle Chandler. Chandler, who would later chase down Kennedy in 2017 in Ballpark Village, fired the fatal shot.

Neither officer was charged in Ball-Bey's death.

Vaughan previously made the news in 2013 when a judge tossed out evidence in a drug case amid claims the decorated officer had planted evidence, saying that he found "the credibility of the officer is questionable ..." the St. Louis Post-Dispatch reported.

Continuing to put him out in public to deal with protests is a mistake, Khazaeli says.

"This is a guy who was a target of protests," the attorney says.

Other plaintiffs in the suits from the Busch Stadium incident include Heather DeMian, a disabled livestreamer who was in her wheelchair to the far side of Olsten when she caught a blast of pepper spray, and state Rep. Rasheen Aldridge, then the 5th Ward committeeman, who was also sprayed. Khazaeli represents them as well. He's an attorney for a majority of plaintiffs in the Stockley protest civil suits.

He suggests the longrunning, low-reward criminal cases against Gray and Kennedy make more sense in the context of the civil suits. Vaughan and Olsten are both named in civil litigation. It's harder to prove wrongdoing on the part of the city if the courts in the criminal case find that Gray and the others were in the wrong. The city didn't respond to a question about whether there was a strategy to undermine the civil cases with the criminal prosecutions, but it's worth noting that if it did factor in, it's not a strategy that has been universally applied. There are others pursuing lawsuits over protest arrests who were not criminally prosecuted.

Mostly, Gray says, he's ready for it all to be over. He's continued to go to protests, often taking a visible role. But the memories of his arrest outside Busch Stadium continue to wear on him, sucking away energy as worries creep in about what could happen as he continues to go against police.

He says he never looks for Vaughan or Wentzel or Chandler — or any specific officer when he's out on the street. He figures any officer in the current system could be a danger, and that's one of the main reasons he and the others were protesting on that night three years ago. However, he says, he still remembers what Vaughan told him right before everything went crazy.

"He looked me right in the face and said, 'We're tired of this shit,'" Gray says. "And then he pushed me."