The Firing of Steve Spagnuolo 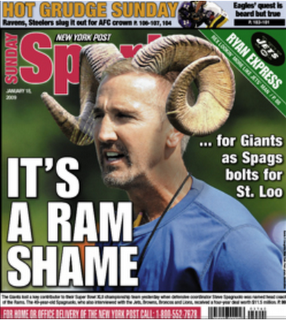 ​Things are bad for the Rams this season. I'm sure you didn't need me to tell you that, but there it is anyway. They were thought to be the class of a very weak NFC West division coming in, but such has not been the case. Instead, the San Francisco 49ers have emerged as the sleeping power so many people thought they were under first-year head coach Jim Harbaugh, and the Rams have gone 2-8.
The offense is the worst in football; the secondary is shot. The quarterback is regressing; the O-line is shit. The team could field a second, likely more competitive squad just with the players they've had to put on injured reserve this season. Things are bad for the Rams.
Which, of course, has led to plenty of media types, acting as the Voice of the Fans, to call for Steve Spagnuolo to be fired. Team sucks, coach is shown the door. It's the way things work in professional sports.
Unfortunately, I'm not sure firing Spags wouldn't do more harm than good to the team.
There's a question that has to be asked here, a question about how you balance two things. How do you balance the current crapitude of the team, which has plenty to do with the coaching staff, against the potential longer-term harm done by a coaching change?
What a new coach would mean for the Rams is fairly obvious: another rebuild. Maybe not a full rebuild, mind you, as they do already have some very nice pieces in place, but new coaches always bring in a new staff, and a new philosophy to boot. A new coach winning in his first season, the way Harbaugh is in San Francisco, is a fairly unusual situation.
Really, though, my biggest concern in any potential coaching change would be for Sam Bradford. Bradford learned a new offense in his first season in the NFL, and did so remarkably well. He then had to turn around and learn another, completely different, offense his second year. It's not going so well, to be honest. At the time of Josh McDaniels' hiring, there was some concern over Sam learning a new offense for the second season in a row, but those concerns were mostly overridden by the admiration for Bradford himself. Unfortunately, it now looks as if those concerns about him playing in his third offense in as many years were more right than most of us wanted to believe.
If Spagnuolo is shown the door, Josh McDaniels will head out right behind him. The Rams certainly aren't going to hand McD the head coaching position after witnessing the disaster he presided over in Denver, not to mention the fact it's his vaunted offense which is currently dead last in the league in scoring. So out goes McDaniels. In comes a new offensive coordinator, with a third offense for Bradford to try and learn. At least he would have a full offseason to try and get it down, I suppose. But eventually, trying to install a new offense every year of Sam's career is just going to send him down the Alex Smith path, and that's not at all the path anyone wants to see Bradford on. The Rams have invested too much in Sam Bradford to send him down that path.
Beyond Bradford, the rest of the team would have to learn new terminology and system as well. The defensive line, perhaps the only unit on this Rams team which has clearly performed well enough to win consistently, is built entirely on Spagnuolo's vision for a D-line. So what happens if the next coach and defensive coordinator don't have the same vision? The team's biggest strength could very well be neutralized.
The other option, of course, would be to tailor the coaching search to the personnel already in place. But going out and finding a coach who specifically wants to run a team in the way your team is already built seems more than a little self-defeating to me. It isn't working now, so you want to find a guy with the same vision?
There are plenty of ways teams can get stuck in losing cycles. Bad drafts, franchise-altering injuries, ownership issues, things like that. The coaching carousel is one of the most insidious and dangerous. You think you're doing the right thing, that the next coaching change will be the one to turn things around. You think things are bad now and you have to make a move, to change something and get the team back on track; it's just a matter of finding the right guy to do it. But each move just puts the team right back at square one and starts the process all over again. New coach comes in, tries to build a winner, the results don't come, and you make another change. Same story over and over, when the real issue isn't the wrong coach; it's the interrupted process.
Inertia is a dangerous thing as well. Bad coaching isn't going to get better, and perhaps the problem really is this coaching staff. If so, then prolonging the inevitable certainly isn't a desirable action. But which is worse: to move too early and risk setting the franchise back again, or to move too late and waste yet another season before admitting a change really does need to be made? I don't honestly have an answer, but it's an incredibly important question all the same.
I also don't know if Steve Spagnuolo has it in him to be a good head coach. There's plenty of evidence to say he doesn't, in fact. But for the sake of the team -- and for the sake of Sam Bradford in particular -- I hope Stan Kroenke and the rest of the Rams braintrust think long and hard before they go starting the process all over again from square one.