The Guy Walking Across St. Louis with a Goat Needs a Volunteer 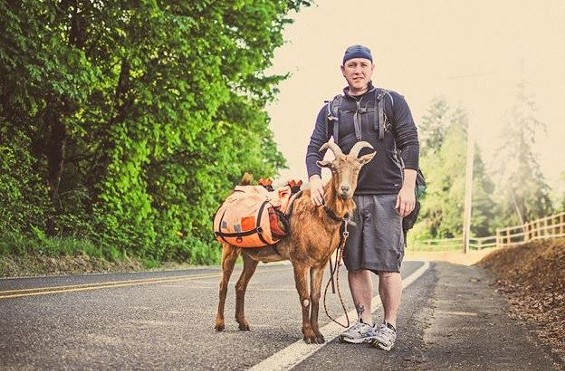 Steve Westcott, the man walking across the country with a goat to raise money for an orphanage in Kenya, needs some help.

After about a month in St. Louis talking to people about his mission, getting a tattoo of his goat and even receiving his first ever animal-control citation (thanks, St. Charles), Westcott is amping up his social-media presence and aiming for a spot on a late-night talk show.

And he's looking for a videographer.

See also: Steve Westcott is Walking Across St. Louis, and America, With a Goat

In a Craigslist ad posted Monday, Westcott says he just needs a few minutes of footage.

"I don't need help editing, just need the footage," Westcott says. "I don't have any money to give, but I'll be sure to give you credit and a shout-out on my social medias."

A social shout-out could be pretty valuable to an upstart videographer; Westcott has more than 21,000 followers on Instagram.

Westcott has been walking across the country for two years now. He and his goat, LeeRoy Brown, are trekking from Seattle to New York to raise awareness and money for an orphanage he wants to build in the slums of Nairobi, a goal a friend suggested after a year on missionary work in Kenya, where orphans as young as five years old are already using drugs "just to kill the pain and the hunger pains and to stay warm at night," Westcott says.

"We do the work, but God does the miracle," Westcott tells Daily RFT. "There's no way a guy with a goat can raise $200,000 to buy land in Africa. It's not cool enough, it's not hip enough, it's not special enough.

"There has to be a miracle."