The Legend of Allen Barklage

He was a daredevil, a savior and a man who cheated death. But it was the life he took that made him famous 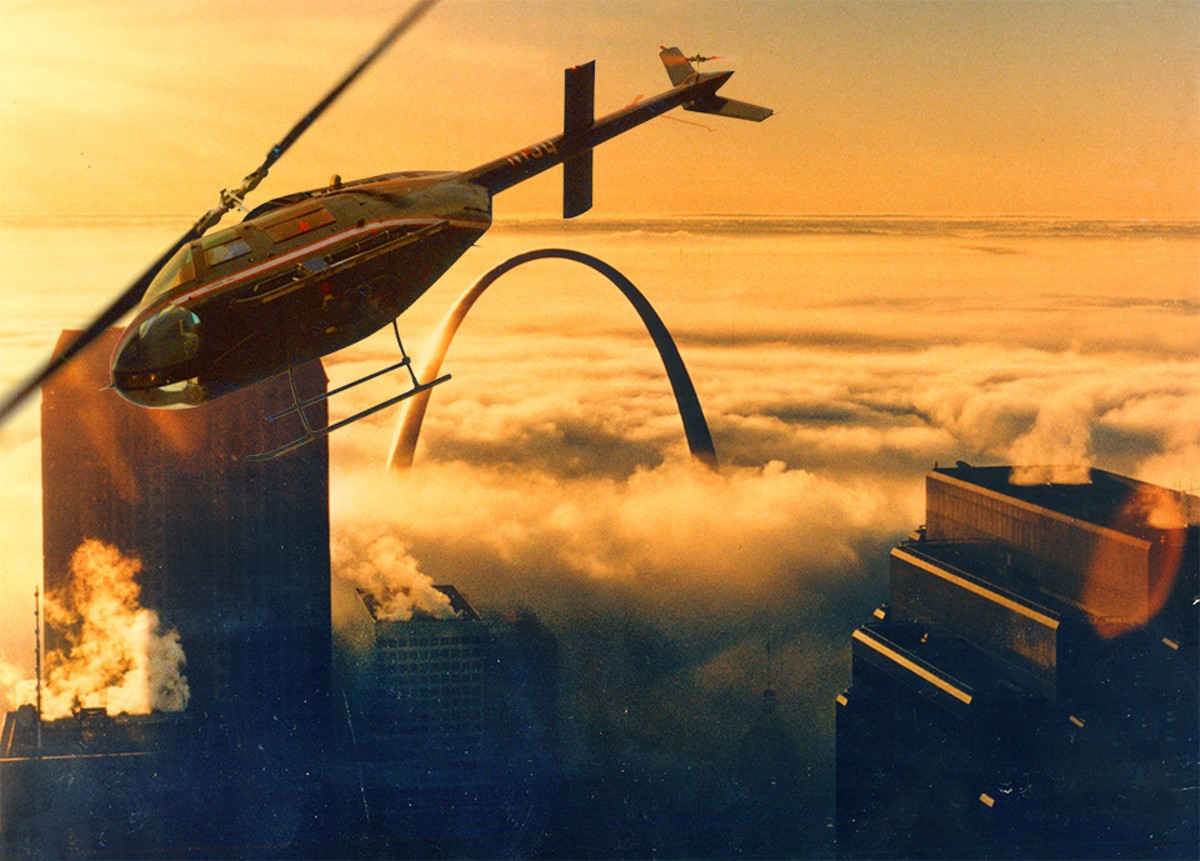 ILLUSTRATION BY EVAN SULT, BASED ON A PHOTO BY ALLEN BARKLAGE

Ninety-two feet above the Mississippi, the man on the bridge wept as he talked into an early-model portable phone. It was just after 6 a.m., rush hour on June 13, 1991. The man had already swung his legs over the side. He wanted to jump.

But the phone call provided distraction for the two officers inching closer. Sauget Police Detective Vito Parisi had offered the man the phone and a suggestion that, at the very least, he should talk to his family before ending his life. Minutes into the call, Parisi and a second Illinois cop wrapped their hands around the man's arms and shoulders.

The three struggled, pitting gravity and one man's self-destruction against the efforts of two cops.

It was a classic St. Louis summer day, humid and hot. The man was dripping sweat, and Parisi felt his grip coming loose. He remembers the next seconds seeming to stretch into minutes.

"He just slipped right through our hands," the detective recalls. "There was nothing that we could do, except look." There was the man, falling with unbelievable slowness, impossibly distant, arms flapping wildly. There was the shape of a body hitting the water, and the man disappeared into the cloudy wash of the Mississippi.

And then there was the sound of a helicopter. Parisi looked up and saw the yellow-and-black machine diving out of the sky.

It was Allen Barklage.

A traffic reporter and pilot, Barklage had broadcast the report on the suicidal man that originally roused Parisi into action. "There's a jumper on the bridge," Barklage told radio listeners. Sauget lies a few minutes' drive from the Poplar Street Bridge; the detective arrived just in time to try to stop the man's jump.

A different pilot might have continued with the traffic run, leaving the tragedy for the police and the morgue to sort out. Barklage was not that kind of pilot.

From inside the cockpit, Barklage could see the man fall. He radioed back to his passengers, who included an off-duty O'Fallon cop, to get ready for a rescue. Then Barklage tilted the helicopter toward the Mississippi.

The impact of the fall had broken the man's rib and punctured his eardrum, but he was alive, and he was now fighting to stay that way. While Barklage kept the helicopter in a hover, the O'Fallon cop balanced himself on the landing gear and hauled the man from the river onto the skid's metal surface. Soaking and exhausted, the man grasped the skid as the helicopter ascended, but his arms gave out a few moments later. He dropped back into the water. Barklage swung around for a second attempt, and this time, the man hung on just long enough for Barklage to drop him on a nearby barge.

Two TV stations had captured the heroic save — though KSDK, whose chopper Barklage had flown, wasn't one of them. In the coming weeks, Barklage smiled for award photos and commendations. He attended fundraisers with the station's helicopter, meet-and-greets and luncheons. 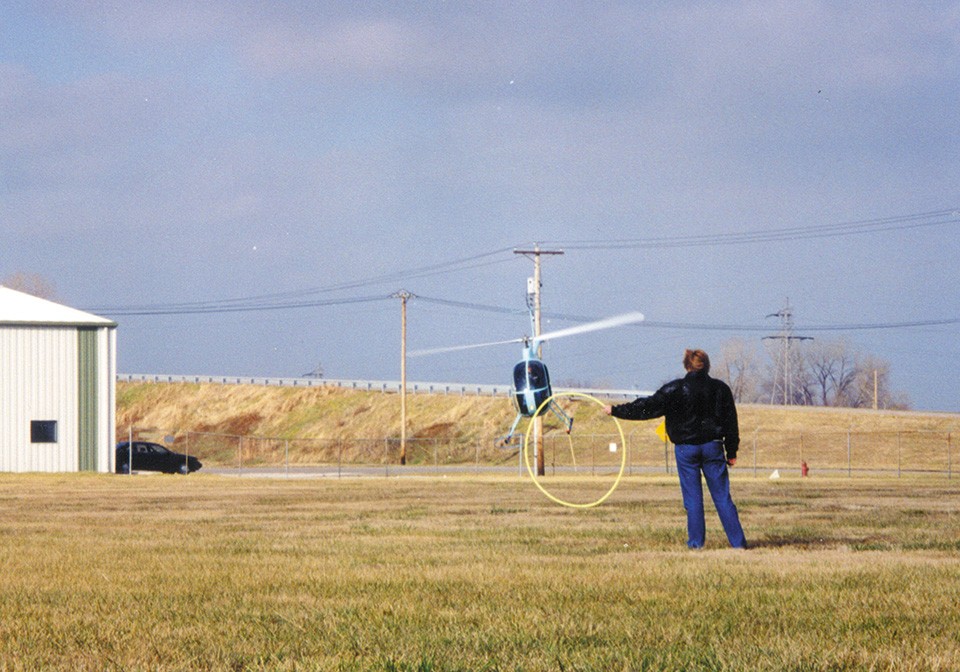 COURTESY OF GENE HOFFMEYER
Barklage performed aerial stunts in his Mini 500 helicopter. In this photo, he's practicing snatching a hula hoop with the craft's landing gear.

It wasn't the first time he had been called a hero. For more than two decades, Allen Barklage buzzed above St. Louis as traffic reporter for KSDK as well as virtually every radio station in town. He was the voice on both AM and FM, a gearhead bantering to motorists about an overturned vehicle on the highway or a police pursuit in East St. Louis.

Through it all, Barklage never stopped chasing thrills, and emergencies seemed to chase him as well. When he wasn't reporting traffic, he raced go-karts and happily flew under bridges for the fun of it. There must be something wrong with him, his wife would sometimes remark. Sometimes, she was only half-joking.

Going by newspaper accounts alone, Barklage's helicopter skills saved several lives, including that jumper in June 1991. But it was also a helicopter that killed Barklage. He died twenty years ago, days after a fatal malfunction plummeted his helicopter into the ground.

A second anniversary involving Barklage also takes place this year. Forty years ago, Barklage ended a hijacking by shooting Barbara Oswald in the head 500 feet above the U.S. penitentiary in Marion, Illinois. That was the day he became a hero. That was the flight that made him a legend.

The killing haunted him for the rest of his life. 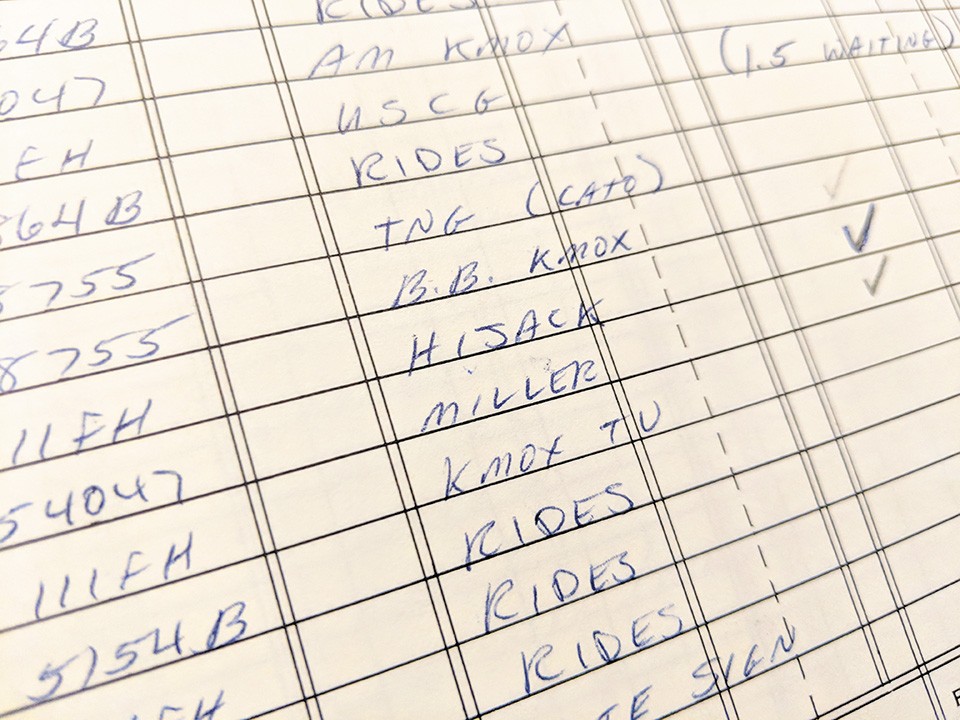 DANNY WICENTOWSKI
One line of Barklage’s flight log for May 24, 1978, simply read, “Hijack.”

"He never worked at anything he didn't enjoy," Hoffmeyer recalls. The two spent their childhoods tinkering on cars and motorcycles, fishing and hunting rabbits in the forests and farmland around St. Charles County. They were briefly separated when Barklage's family moved to Eureka, but the childhood friends reunited at McDonnell Aircraft Corporation, where they both landed jobs after high school. The year was 1966.

"Of course, that was when the Vietnam War was getting hot and heavy," Hoffmeyer recalls. "One day, Allen's girlfriend called me up and said, 'Come over here and talk him out of it, he's talking about joining the Army.'" It didn't quite work out that way. "I went over to talk Allen out of it," Hoffmeyer says, "and instead he talked me into it."

The eldest of the three Barklage boys, Larry, had joined the U.S. Army intending to gain admission to flight school. He advised his younger brother to do the same, to act before the draft forced him into infantry combat. Why fight in the trenches, Larry told his younger brother, when you could soar above them?

Allen Barklage chose the sky. Hoffmeyer enlisted a month later. Both were eighteen.

Barklage wound up in the 192nd Assault Helicopter Company and began his flying career behind the controls of heavily armed Huey gunships. The Viet Cong shot Barklage down multiple times over the next years; photos show the young pilot in green military fatigues grinning near the wreckage of some unfortunate piece of Army property. Barklage would later tell an interviewer that he'd nearly died in Vietnam when a piece of shrapnel blew a hole into the cockpit. But he'd given up his regular seat for that flight; the man in it died.

Barklage was lucky, but he was also very, very good at his job. After his first tour, the young combat pilot came home for additional training. He later told a reporter that he was uncomfortable with the version of America that greeted him, a place caught up in protest and anti-war fever. He wasn't ready to come home for good.

Hoffmeyer chose not to reenlist. Twenty-five percent of his class at flight school, some 300 pilots, had died in that first tour. For Hoffmeyer, beating the odds once was more than enough. Not so for Barklage; he remained in the Army until 1972.

After his discharge, Barklage joined Hoffmeyer back in St. Louis, where both took jobs as commercial pilots, ferrying tourists and TV and radio reporters. Barklage was undoubtedly overqualified, but he was also lucky to find work. The war's end had saturated the market with helicopter pilots, says Larry Barklage, who himself took a job with the Federal Aviation Administration.

"He was a natural-born pilot, instinctual. He put on a helicopter like you'd put on your shirt every day," he says. "I used to joke that, if they'd known how much he enjoyed flying helicopters, they would have paid him less."

Barklage loved flying too much to be scared by it. "I've been shot down three times in Vietnam," he would tell new radio traffic reporters. The boast was meant to be reassuring — that he could handle anything.