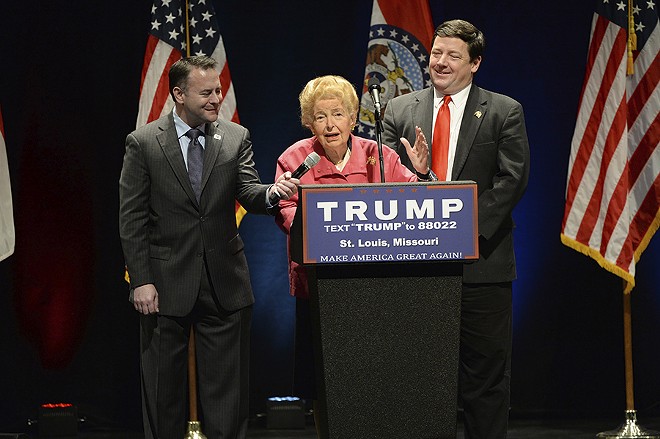 GINO SANTA MARIA
Schlafly shocked some friends by endorsing Trump. Ed Martin is to her right.

Perhaps the only thing surprising about Ed Martin's tenure at Eagle Forum is just how quickly everything devolved. The two Eagle Forum entities had operated without much (if any) conflict for more than four decades. Yet within fourteen months of Martin's hire, public bickering had overwhelmed the organizations.

And even if a skeptical board of directors acceded to Schlafly's choice of successor, they didn't stand by for long. Barely a year after hiring Martin, the 501c4 board fired him. The problem for them has been that Martin refuses to go.

Martin says he realized he was stepping into a tricky situation. He says he spent the first months of his presidency visiting Eagles around the country, including some who would eventually turn on him. "There's no one who's ever going to replace Phyllis," he recalls telling them. "It's not that I'm trying to do that. But we have to keep going with what she wants, and I'm trying to do that."

To this day, he believes he's done that, pointing to the New York Times bestseller he co-authored with Schlafly (and Brett M. Decker), The Conservative Case for Trump, as well as numerous radio gigs and other appearances to advance her agenda. "I think I sleep pretty well at night, knowing we succeeded for Phyllis," he says.

But if the board was devoted to Schlafly, and Martin was carrying out what Schlafly wanted, where would conflict come from? To Martin, it basically comes down to one thing: Schlafly's preference for Trump.

The board members, however, say they'd disagreed about politics before. It was never a problem until suddenly Martin was running interference between them and Schlafly. And they believe the problem was less Trump and more their distrust of Martin.

Initially, says Cathie Adams, a longtime 501c4 board member and president of the Texas Eagle Forum, when the board started talking about an independent audit, it wasn't even about Martin. For years, everyone had total faith in Schlafly's guiding hand. Now it was a new era.

"We'd never even seen the financials, and that's something board members should have asked for all along," Adams acknowledges. "That's just how you run a business. Whatever Phyllis said or asked or did, that's what we did. 'What does Phyllis want?' That was always our first criteria. But if Phyllis was going to be passing the baton, it felt like we've got to be accountable to the thousands of members of Eagle Forum."

They met stiff resistance, not only from Martin, but from two of Schlafly's sons on the 501c3 board. John Schlafly had long been his mother's caretaker; Andy Schlafly was a conservative activist who founded Conservapedia — his "trustworthy" alternative to Wikipedia. Both were on board for Martin's agenda, even as many of their mother's longest-serving allies balked.

Says Adams, "As a board, there has never been an outside audit, ever, in close to 40 years. We asked for an outside audit and then all hell breaks loose. What is that telling us?"

She adds, "We're not accusing anyone of anything, but why this huge pushback when we were simply asking for the first outside audit in the organization's history?"

But if the call for an audit was perfectly reasonable, in a March 2015 interview with the Dallas Morning News, Adams inadvertently gave Martin the ammunition he needed to make the conflict about "disloyalty" instead.

"'We have no respect for that man,' she said of Trump. '[Schlafly's endorsement] is going to be widely dismissed. At 91, it is just totally unfair to impose upon someone who has such a beautiful legacy ... I think this was very much a manipulation. When you're 91 and you're not out with the grass roots all the time, it is very much taking advantage of someone.'"

For many Eagles, Adams' quotes, while impolitic, were not inaccurate. Schlafly's health was poor, and they believed Martin was using that fact to cloak his decisions in her name. Adams says today she meant only that Schlafly had been unable to travel in recent years, and wasn't fully aware of the feelings of Eagles in places like Texas. She says she called Schlafly to apologize for the way the quotes sounded — and received swift absolution.

For Martin, though, Adams' quotes were treason.

The 501c4 board had scheduled a meeting on April 11 to discuss Martin's future. But on a "leader call" on April 8 with Eagle Forum staffers from across the country, Martin got the jump on them.

Referencing Adams' comments about Trump, he announced that Adams' "endorsement" had been "rescinded," according to a recording of the call. He suggested the 501c3 organization was taking action against others who had also been disloyal.

Then he addressed the rumors about Schlafly's health — in full attack mode.

"There has been a slur, an ageist slur, by people who say Phyllis isn't the same as what she once was mentally," he said. "Now of course Phyllis is 91, but the slur is absolutely despicable. And I want to say to all of you on this call, I believe you have a moral obligation to defend Phyllis, to promote Phyllis, when people do this. ... For people to assert that and to allow that to be out there — it's really despicable."

First, he reported that he had convened a meeting of the 501c3 board, and it had sent letters to six people asking them to no longer identify themselves as being part of Eagle Forum in any way.

The six people just happened to be some of Schlafly's longest-serving lieutenants. All six were members of the 501c4 board. They even included her daughter, Anne Schlafly Cori.

Then, almost as an aside, Martin announced that Executive Director Glyn Wright was "no longer working in the D.C. office."

"We'll be helping her transition as she would like," he said. "We thank her for her service."

A woman asked politely about what Eagle Forum was doing on the "transgender issue." After Martin answered, she pivoted to her second question.

"Where is Glyn Wright going?" she asked, sounding shaken. "I didn't know about that."

Martin barely paused. "I have no idea," he said. "I just know she's no longer working for us."

Another voice suddenly broke through the polite murmurs. "This is Glyn Wright," she stated. "I was called five minutes before this meeting and fired for no cause."

Indeed, Wright tells Riverfront Times she was on the conference line, waiting for the meeting to start, when Martin called her cell phone and announced she was fired. He gave no reason. (Later, after she burst into the call to reveal her departure was actually a termination, he sent her a two-line email, telling her she had been fired for "disloyalty." She has never gotten a penny of severance.)

With that, the call descended into chaos. Martin had basically announced that six longtime board members were suddenly persona non grata, and that Eagle Forum's D.C. executive director had been fired. The outcry was swift.

"You cannot disrespect people and expect you to be respected," one woman cried. "You're going to reap what you are sowing."

Sarah Fenske is the executive editor of Euclid Media Group, overseeing publications in eight cities. She is the former host of St. Louis on the Air and was previously editor-in-chief of the RFT and the LA Weekly. She lives in St. Louis.
More
Scroll to read more St. Louis Metro News articles (1)
Join the Riverfront Times Press Club