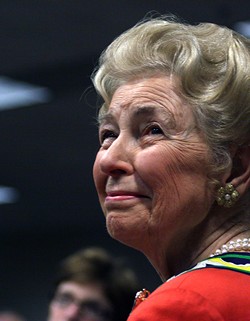 Phyllis Schlafly died six weeks after the convention. Even Martin acknowledges that the public fighting had taken its toll.

Still, Donald Trump — now the Republican nominee — spoke at Schlafly's funeral at the Cathedral Basilica, eulogizing her as the "ultimate happy warrior."

"She was always smiling, but boy could she be tough," Trump said. "Her legacy will live on every time some underdog, outmatched and outgunned, defies the odds and delivers a win for the people." He concluded, "Phyllis, we love you, we miss you and we will never, ever let you down."

Less than a week after Schlafly's death, however, Eagle Forum was again consumed by vitriol.

Even before Schlafly's death, many of her longtime associates had booked flights to attend the annual Eagle Council in St. Louis. But in the week before the gathering, it became clear that Martin had no intention of welcoming the "disloyal." When Colleen Holcomb registered, she received an email from Martin in response.

"Over the past months, your behavior towards Phyllis, her family, her organizations and staff have been noticed by her and others," Martin wrote. "Phyllis objected to it. In addition, your behavior has caused discomfort for staff and others. Therefore, I inform you that you are not welcome at Eagle Council. If you attend in any way, you will be asked to leave. If you do not leave promptly, appropriate authorities will be called. This also applies to your husband and any other family members. All the best. Ed." Others report receiving similar missives; a court order had to be negotiated giving them the right to attend.

At the gathering, icy formality turned to shouting. There seemed to be a lot of new faces, Holcomb says. She found herself insulted by one attendee as "a two-bit divorce lawyer." Another Eagle told her, "Phyllis told us on her deathbed we were supposed to shame you, so shame on you," she says. It was as if the angry atmosphere at Donald Trump's rallies had infested what was traditionally a meeting of allies.

Some of Martin's critics had decided to wear stickers reading simply "For Phyllis" — a simple message they hoped would unify the warring factions. Instead, Martin called them out.

"They're wearing something that implies that other people aren't for Phyllis. It's a great disgrace for them that they'd sign on to a court order and then disrupt the proceedings," he intoned, as the crowd booed the women.

"We're not going to allow people to disrupt things here. ... If you have a problem, we'll call security, and we'll be able to address that. Phyllis wanted that," he said.

For many volunteers, the centerpiece of the council had long been the reports from state leaders. Schlafly loved hearing what her Eagles were up to, and several attendees recall it as a good exchange of ideas from the field.

But Martin scheduled the state reports for one of the final hours of the final day, and seemed in no mood to linger. When someone tried to give Eunie Smith's report from the Eagle Forum of Alabama in her absence, Martin snapped that there wasn't time and called for security. People started singing "America the Beautiful" to drown out the young woman.

It was an appalling moment for many longtime Schlafly allies, and spoke to a general feeling that something had changed, for the worse. "My mother taught me how to handle obnoxious and rude behavior with grace and class," notes Anne Schlafly Cori. "Sadly, I never expected that such un-Phyllis like behavior would come from individuals associated with Eagle Forum."

In a video of the fracas later filed in court as evidence, you can hear a man say, "I never thought I'd live to see this" just before another man confronted the person filming.

"You aim that thing in my face one more time, buddy, and I'll rip off your head," he bellowed.