The Michael Vick Experience: Coming to a TV Near You! 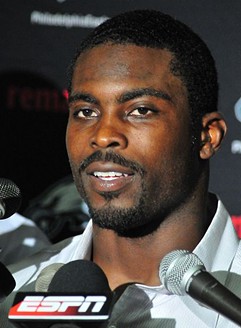 commons.wikimedia.org
If you've ever wondered what, exactly, makes a man like Michael Vick tick, today is your lucky day.
Tonight, Black Entertainment Television will air the first of a ten-part documentary series about the embattled quarterback. It will focus on his fall from grace, his time in prison, and his road back to some measure of respectability. (Well, maybe not respectability, exactly, but a life in which he's free to ply his trade without constant controversy.)
Vick himself says of the show, "I'm on a mission to get everything back - not the money and the fame, but to restore my family's good name." Noble words, certainly, but I wonder if that's really an achievable goal at this point.
The other question I immediately have is, "Is it really necessary to have ten episodes of this thing?" Don't get me wrong; I'm sure the tale of Vick's life is a full and fascinating one, but is it really 300 minutes fascinating? Yes, he grew up poor, and yes, I understand dogfighting is part of a certain culture. So is female circumcision. That doesn't make it right.
Then again, judging by the response the documentary has gotten already, I may be completely off-base on this one. Vick seems to be a remarkably divisive figure still, long after I had thought people would have moved on. After all, Leonard Little killed an actual human being, and virtually no one seems to really care. Vick did his time, and now he's just another ex-con trying to make a living. That's the way I see it, at least. I certainly find what Vick did appalling, but people do bad things all the time. They do their punishment, then return to society. I'm not sure why Vick should be all that different. No one's asking you to have him over for dinner and play with your Shih Tzu.
Could I root for Vick if he were on my team? Probably not, to be completely honest. I find him repulsive on a very personal level, and I would prefer not to have to look at him week after week. That does not, however, mean I think he should be prevented from earning a living like anyone else. I just don't understand why this is such a big deal.
But that viewpoint does not seem to be at all the majority. I read stories about Vick, and the comment sections are littered with people ranting that he should be banned from football, that he's the very devil himself, and he's easily the worst human being who has ever lived.
Just as vocal, of course, are the Vick defenders, who seem largely to be very angry and black and convinced the disdain for Vick is somehow racially motivated. As a white person, I fail to see any racial motivation, but I also acknowledge that as said white person I am perhaps not particularly well qualified to judge. To me it seems most of the hatred for Vick is based on the idea his victims were helpless in a particularly awful way, but maybe I'm just missing the point.
Regardless, the Michael Vick story seems to be one which just refuses to die. And now we've got ten more chances to look at the man and his life and his circumstances. Personally, I doubt it's going to change any minds. Those who hate Vick for what he did will probably still hate him and think his tears those of a crocodile. Those who love him unconditionally will hold him up as a symbol of persecution and decry the haters.
Then again, maybe I'm wrong and this will really change some people's minds. I wouldn't hold my breath, though.