The Rams Got Their Man. Now What? 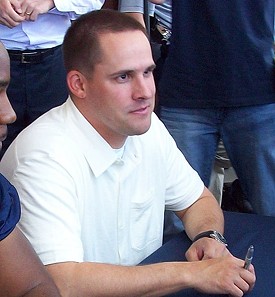 commons.wikimedia.org
Now tell me that's not a face that you just want to fall in love with. Go ahead. Can't do it, can you?
It turned out to be much more interesting and convoluted than most of us had expected, with a negotiations breakdown and last-minute rumors of Seattle involvement, but in the end, the Rams hired Josh McDaniels to be their new offensive coordinator. Details of the contract haven't really been released yet, but it's known to be a two-year deal.
It's tough to overstate the importance of this signing. It's the first major staff change in Steve Spagnuolo's tenure as head coach, and one he (and the Rams as a whole), desperately needed to get right. This team is finally moving in the right direction after years of wandering the desert, thanks to a vastly improved defense and the acquisition of a franchise quarterback. In order to get to the next level of competitiveness the Rams must find a way to build an offense worthy of Sam Bradford's talents. If anyone can do that it's McDaniels, the man responsible for coordinating the high-powered New England offenses of recent vintage.
That isn't to say McDaniels is assuredly the right man for the job, of course; he could fail here in St. Louis. But if he does, at least the Rams will have failed with their guy. Losing with your second or even third choice not only hurts, it leaves too many questions behind.
So now that the Rams have their offensive guru under contract, what needs to be done next to make sure he can do the job he's expected to do?
First off, it's a good thing the Rams got this hire taken care of relatively early in the offseason. With the spectre of a lockout looming as March approaches the Rams absolutely must be cognizant of the limited time they may have to install the new offensive system McDaniels brings to the table. If there is a lockout and teams end up with only a bare few weeks worth of training camp there's no way the offense is going to be successfully instituted in time for the start of the regular season. The Rams must get the playbook in place and in the hands of the players as soon as possible.
Second, the Rams' top priority this offseason should have been upgrading the offensive talent base already, but the concrete knowledge of the system which will be run in 2011 should inform those decisions. The New England offenses, and the system McDaniels subscribes to overall, are known for their flexibility in adjusting to the personnel onhand, rather than serving as a static system run regardless of the talent available. Even so, there are a few hallmarks of McDaniels' offenses in terms of personnel, and the team should take those into account as they prepare for free agency and the draft. You keep McDaniels as far away as possible from personnel decisions, mind you; we all saw the disaster he created in Denver by getting rid of players he didn't get along with, but the system needs should be served.
There are three positions I see as even more of a need now than before, when we all expected Pat Shurmur's West Coast offense to be the order of the day in 2011.
A deep threat -- I know I and everyone else has harped on this endlessly, but I think it bears repeating now in this new light. The Rams must be able to stretch the field vertically in order to be more successful on offense in 2011, and that need is only compounded with a new system coming in. The WC offense focuses heavily on getting yardage after the catch, with very few passes actually thrown more than fifteen yards. McDaniels' offense contains plenty of short throws as well for the quarterback to make, but the big plays downfield typically come from design, throwing the ball deep, rather than busted tackles on underneath routes.
click to enlarge

commons.wikimedia.org
Sidney Rice would seem to offer exactly what the Rams need.
​This player may or may not already be on the Rams' roster. With Danario Alexander on the team all season and Donnie Avery (hopefully) returning from injury, the Rams have a couple receivers capable of going to get the ball downfield. Whether or not those two can be counted on to be reliably healthy and good is the decision the coaching staff will have to make. The talent is there, but so are the question marks.
If the Rams do decide they need another vertical receiver, Sidney Rice is probably the best match for that need on the free agent market. Vincent Jackson, the biggest name free agent receiver this year, is more of a possession receiver and not as good a fit for this role. (That's not to say he wouldn't be a great add, only that he's a little different type of player.) If they end up going for this in the draft, Torrey Smith of Maryland, whom I profiled just the other day, would probably be my first choice for a home-run sort of receiver.
A pass-catching tight end -- I really, really like Mike Hoomanawanui. In fact, after seeing what he was capable of this past season I'm more than a little ashamed of how lukewarm I was on him coming out of college. At the time I saw a guy who was good at everything but lacked a real standout tool. What I missed was that his best tool is that versatility; that lack of weaknesses makes him able to fill a variety of roles and gives him a ton of value.
Even with Illinois Mike on the field, though, the Rams have a lack of receiving talent at the tight end position. Daniel Fells has some pass-catching skills, but he's still a much better blocker than receiver to my eye. He has improved each of the past few seasons, so it's possible he could prove me wrong. He's also a free agent, however, so there's no guarantee he'll even be back. Billy Bajema, in spite of his inexplicable two-touchdown game this season against Denver, is definitely not a big asset in the passing game. The Patriots have had a ton of success in recent years utilising their tight ends to create matchup problems; the Rams could do a whole lot worse than to try and do the same. Which means picking up another tight end whose value comes primarily as a receiver.
As far as options go, Mercedes Lewis of the Jacksonville Jaguars and Zach Miller of the Raiders are both big-time names who will hit the free agent market this year, but both will come with a high price tag. I like Miller in particular an awful lot, but I'm not sure the Rams will want to spend what it would cost to bring in a player of his calibre. For a lower-cost option David Thomas of the New Orleans Saints would make sense, though I don't know how much of an upgrade he would really be over Fells.
If you're looking toward the draft, Kyle Rudolph is the top name among tight ends. He's a Notre Dame product, and he's really, really good. Coincidentally, Walter Football has the Rams taking Rudolph in the second round of their most recent mock draft. That would be a dream, but I personally doubt he makes it all the way to 46. I've certainly been wrong before, though.
Offensive guard -- Another spot that's been harped on plenty this season, but also a spot I think takes on even more importance now than before. McDaniels has had a lot of very nice things to say about Steven Jackson, calling him a special talent and implying he's the sort of player who deserves 30 carries a game and that's just what McD would like to give him. He's also talked about how important he feels it is to be balanced in the offensive game. Now, that could all be lip service, of course, but until I see otherwise I'm going to take those statements as genuine.
click to enlarge

Kevin Faulk was the Patriots' most reliable running back during McDaniels' time there. Just imagine what what he can do with Steven Jackson in the backfield.
​The numbers back up what McDaniels is currently saying; his New England offenses consistently ranked fairly high in rushing chances most years. That pattern broke down this season in Denver, but I think that can safely be attributed to an inability to run the football rather than an unwillingness.
So if we're to believe the Ram offense in 2011 will lean heavily on SJ39 to do his thing, then the Rams must upgrade the interior of the offensive line. It's not a luxury. It's a necessity. Another season of watching Adam Goldberg get blown up play after play is not an option.
The West Coast offense, of all the schemes commonly used in professional football, is the one most capable of getting along without much of a running game, due to the fact the short, quick passes utilised can essentially almost take the place of an actual running game. It's not the best way, mind you, but it can be done. Not so with most other approaches. If the Rams are planning to get a meaningful contribution from Steven Jackson in 2011 (and they absolutely need to get that contribution), they desperately need to build an offensive line capable of getting the man some room to run.
If you're looking for options, Logan Mankins is easily the most interesting name on the market. He played under McDaniels in New England, as well, which could certainly have an impact if he were looking to sign with a team not named the Patriots. In the draft, the two names I like most are Marcus Cannon out of TCU and John Moffitt of Wisconsin. Either would be a big-time upgrade in the middle of the O-line in my ever so humble opinion.
This should be the dawning of an exciting new era of Rams football. The Rams now have not only a dynamic defensive mind running the show, but one of the most intriguing offensive minds handling the other side of the ball as well. If the McDaniels era is to live up to its potential, though, the Rams have to get the talent to execute the system. It was already of paramount importance to find upgrades for the offense, but viewed through the lens of a new offensive coordinator's eyes the priorities may shift ever so slightly. How well the front office can bring in the talent to maximize McDaniels' game plan will go a long way toward determining whether the next few years live up to their billing.