The Redbird Relief Race Heading Into the Home Stretch

Coming into spring training, the Cardinals only had a few real holes to fill. Well, perhaps not holes to fill, really, but at least decisions to make on how best to utilize their resources. 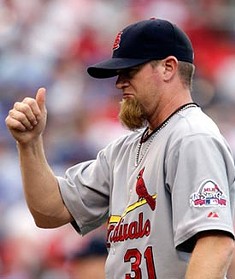 Ryan Franklin and his awful beard will once again be closing games for the Cardinals this season. The rest of the 'pen, though, is somewhat up in the air.
​Third base appears wrapped up in just the way it was expected all along; David Freese was the guy pretty much from the get-go. The bench remains to be settled, but the return of Brendan Ryan mitigates the need for Tyler Greene, so it appears to be a fairly safe bet the bench will include both Allen Craig and Joe Mather and Greene will be playing his ball in Memphis, at least to begin the season.
Which really leaves just the bullpen and the fifth starter's spot. Of all the races, the bullpen is the one left that presents us with the most intrigue, while the fifth starter's race essentially changes the complexion of the bullpen.
Let me preface this by saying I fully expect Kyle McClellan to win the fifth and final rotation spot for the Cardinals. Jaime Garcia has certainly forced his name back into contention with his performance this spring, and in a truly open competition, he would be taking the mound every fifth day.
The problem, of course, is that Garcia, as good as he has been, is still in the process of returning from Tommy John surgery, and the Cardinals would like to limit his innings. It's much easier to limit a pitcher's innings and pitches per outing in the minor leagues than it is at the big league level. Thus, as excited as everyone is over Garcia's potential, and as much as I would like to see him in the rotation all year, I still think in the end he'll be sent down to better monitor his workload. Rich Hill is no longer a real factor, I don't believe, and so I think K-Mac will likely win the rotation spot.
Assuming McClellan wins the starting competition, here are the candidates to fill the remaining slots in the Cardinal bullpen:
Mitchell Boggs
Pros: Boggs has a big-time power arm, with better stuff than nearly anyone else on the staff. He throws almost as hard as Jason Motte, but with great movement on the ball. He also features a slider with true out pitch potential. He's seemingly an ideal candidate to move into a setup role this season with the big club.
Cons: Let's face it; Mitchell has sort of sucked this spring. And by sort of I mean really. He's been badly out of whack mechanically, rushing his delivery and suffering a severe lack of command as a result. Sure, the games don't count, but Boggs doesn't look anywhere near ready to be an impact reliever based on his results so far. That being said, he has improved a bit as camp has gone on. Perhaps he's getting it together.
Blake Hawksworth
Pros: Hawksworth seems well-suited to the Brad Thompson role this year; he used to be a starter and is fairly economical with his pitches, meaning he should be able to handle multiple inning assignments with ease. He also has the best name of anyone in the competition.
Cons: That whole Brad Thompson comparison is a double-edged sword. Sure, there's the good side of versatility and all that, but there's also the bad side of being a very, very mediocre pitcher. Sure, Hawk's ERA+ of 202 last year looks really pretty, but his peripherals in now way support him being that pitcher going forward. His 1.33 K/BB ratio is a huge red flag, as well as an unsustainably low .225 BABIP. Don't get me wrong, I think Hawksworth can be a perfectly useful pitcher throwing low-leverage innings. But if anyone thinks he's going to have an ERA barely over 2.00 again this season, I think they're going to be sorely disappointed.
click to enlarge

chrisoleary.com
Ottavino in his college days.
​Adam Ottavino
Pros: Ottavino is the big surprise in this group. A former first-round pick with a big arm and equally big control issues, Ottavino has struggled throughout his minor league career to find and maintain a consistent delivery and release point. He seems to have made significant progress in that area, and has been extremely impressive. He brings the heat, throwing a fastball in the mid 90s, and has a nasty slider as well. If he can maintain his new ability to throw strikes, Ottavino could be a force at the back end of the 'pen.
Cons: Adam has less of a track record of success than either Hawksworth or Boggs, both of whom have pitched at the big league level and have better results in the minors. Ottavino looks as if he's put his control issues at least in the rear-view mirror, but the sample size is still very small.