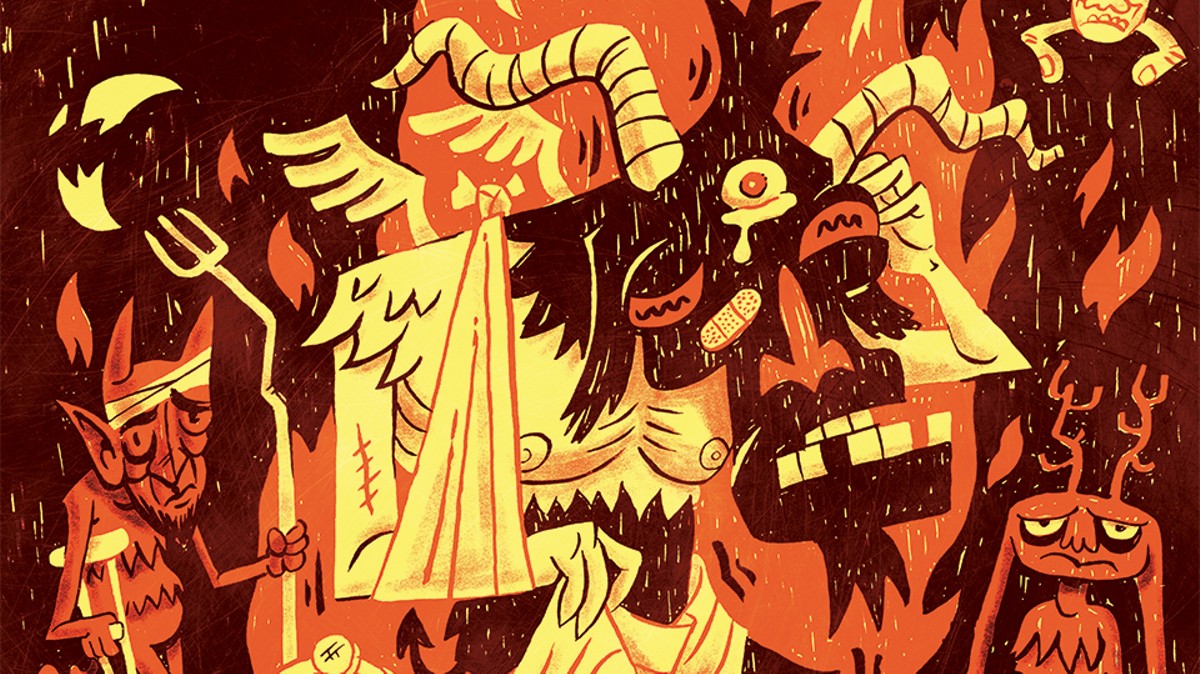 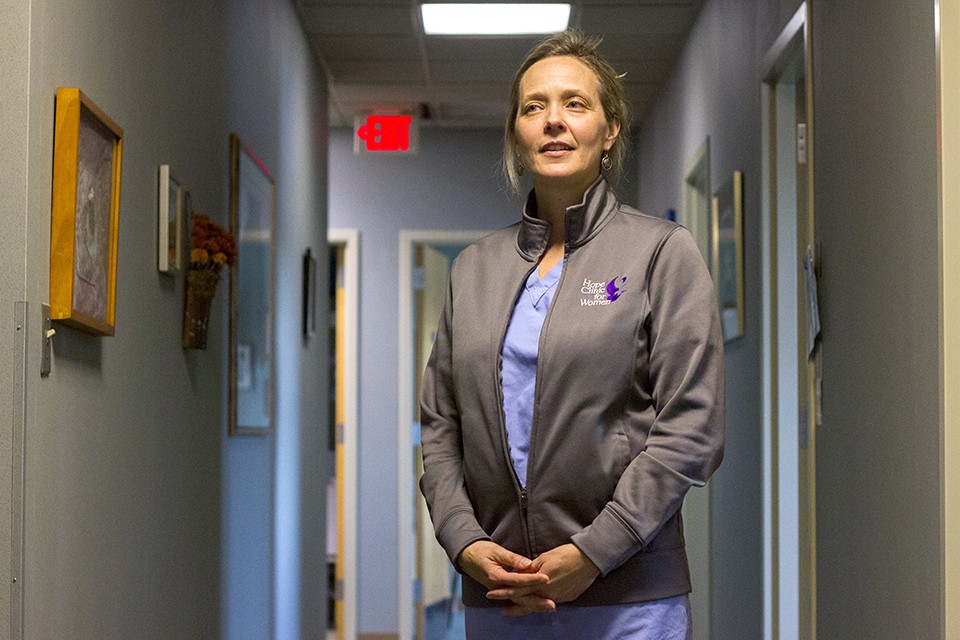 Four months prior to emailing MacNaughton to quit the case, Doe had reached out to Nikki Moungo, breaking the years of silence that began with the gag agreement. Moungo was no longer with the Satanic Temple — she'd had her own bitter dispute with the national council, which removed her from its ranks and dissolved the St. Louis chapter in 2017. She'd subsequently founded the Ordo Sororitatis Satanicae, a women-focused Satanist group.

Doe, who was living in a women's shelter in St. Louis, wanted to air her thoughts. And on the night the Supreme Court dismissed the case, they appeared in a blog post structured as a Q&A.

The blog was titled, "Mary Doe Speaks," but it seemed more like a scream than mere speech when it came to the Temple and its spokesman.

Unlike Roe's McCorvey, Doe still believed in the overall cause. In the Q&A, she described the feeling of relief around her abortion. She felt "no loss," only appreciation for the fact that not being pregnant was the best thing she could do to care for her current child.

Yet Doe uncorked her frustration with the Temple spokesman, accusing the Temple of only offering assistance "when it was lucrative for them." The post also included a redacted, unsigned copy of the gag agreement MacNaughton had sent Doe in 2016. She claimed the Temple had "banished" her after her dispute with Greaves.

"They are out to make a name and nothing else," she charged. "They didn't care about me, I was a cash cow to them."

One week later, Greaves published a manifesto-length response to his personal blog. Titled "The Savage Saga of Mary Doe," the nearly 5,000-word chronicle of grievances described Doe as unstable and abusive, "an unmanageable plaintiff" who attempted to manipulate the Temple members trying to help her. Doe, he wrote, had used the threat of dropping out of the case to hold them as hostages to her demands.

During the first year of litigation, Greaves claimed, Doe had called and texted him late at night, "apparently while inebriated, threatening to pull out of the case if I did not speak to her, and hurling bizarre accusations at me."

In Greaves' telling, Doe's "vague incessant threats" to abandon the case became overwhelming, and he was certain she was about to start requesting more money (even though, he acknowledges, "that demand never arrived.") Her unmanageable behavior, Greaves charged, led MacNaughton to employ a gag order.

In a recent interview, Greaves says Doe's accusation that his group had pursued her case as a "cash cow" was particularly galling.

"We lost so much money in this litigation, with so little to show for it, with the kind of facile dismissals we had," he says. "We did this with no hope of getting anything out of it but to help reproductive rights."

DANNY WICENTOWSKI
A waiting room at an Illinois abortion clinic. In Missouri, patients must wait 72 hours between consultation and procedure.

If there's a single image that clarifies Missouri's position on reproductive rights, it's the billboard that faces motorists leaving the state just east of St. Louis, the one that says, "Welcome to Illinois, where you can get a safe, legal abortion."

Inside the Hope Clinic in Granite City, Illinois, Dr. Erin King leads an impromptu tour through the hallways and waiting rooms. Every door is restricted by keycard and capable of locking down in an instant. King notes that the clinic's previous location had been the target of firebombs.

More than half of King's patients come from Missouri, and King suspects that the trend will only grow more pronounced. Last year, after a new Missouri law required women to undergo a pelvic exam before receiving a medical abortion, Planned Parenthood in St. Louis began referring patients to Illinois, where prescribing a pill doesn't require doctors to probe a patient's vagina.

Even now, King says she still hears from former Missouri patients who struggle to grasp that it is not Planned Parenthood enforcing a 72-hour waiting period, but rather their own state government. In the Hope Clinic, the entire procedure, from intake to surgery to exit, takes a single afternoon.

"Everyone has an ultrasound," King explains, taking the tour past the exam room. The procedure is used to determine a precise gestational age; no one is forcing Illinois doctors to talk to patients about fetal heartbeat or when the collection of cells becomes a unique human being.

King comes to a room marked as a counselor's office. "Everyone has a meeting here. We do call it 'counseling,' but it's really just education and informed consent," she says. "Everyone gets seen alone so make sure they're here of their own free will and not being coerced."

The clinic couldn't be more different than the one in Missouri, where lawmakers have seen that ultrasounds and the concept of "informed consent" take on very different meanings. In Missouri's Republican-dominated General Assembly, most lawmakers appear hopeful that the Supreme Court will soon overturn Roe v. Wade, freeing them to ban abortion. Missouri Republicans have even filed a bill to enact an abortion "trigger ban" — if it's passed, the minute Roe is repealed, the vast majority of abortions would immediately become illegal in Missouri, without exclusions for rape or incest.

Even if Roe stands, another provision of the bill would bar abortions after detection of a fetal heartbeat, which can occur as early as six weeks into pregnancy — before many women even know they are pregnant.

The bill has drawn opposition from Democrats and abortion activists, who say it could make Missouri the most restrictive state in the country for abortion access. But the pro-choice crowd is badly outnumbered in the state capitol, and while they argue that science is on their side, Missouri lawmakers are happy to cite divine inspiration instead. The GOP bill even begins with a sort of preamble, declaring that the law's provisions are made "in recognition that God is the author of life."

That bill seems ripe for challenge by the Satanic Temple, and while Mary Doe's case has ended, the Satanists' ambitions have not. Nikki Moungo hopes to build her own group into a source of political influence. And the Satanic Temple — recently awarded tax-exempt status as a religion by the IRS — has its own plans.

In March 2018, MacNaughton filed a new lawsuit in federal court, this time on behalf of "Judy Doe," a pregnant Missouri woman who alleges Missouri is violating her Satanic belief in bodily autonomy.

A federal court dismissed the case, but the Temple has filed an appeal. There may be more years of litigation.

The Temple's attorney offered an immediate, one-word response: "No."