The St. Louis Battlehawks Are Back

The XFL makes it official: the team will not change its name 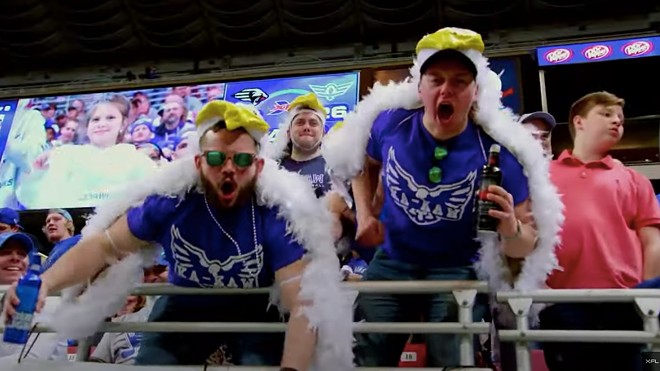 This morning the XFL officially released the names of its eight teams, as well as new promotional materials for each one of them.

Battlehawks fans will no doubt breath a sigh of relief that they can still yell "Ka Kaw!" and go to games wearing feathery wings. The league avoided what would have been an ill-advised decision to change the Battlehawk name, which in only five short weeks of play the city made its own.

The Battlehawks new logo is a lot like the old one. A sword is still flanked by two wings, but now the edges of the feathers are a little sharper, conjuring up an aesthetic of an F16 or some other steel fuselage fighter jet that goes really, really fast.

The font the league uses to spell "Battlehawks" has changed slightly as well, with the letters starker and more industrial.

XFL
A new riff on the classic Battlehawks logo.

Other PR materials released along with the new logo delve into the mythology surrounding the team's avatar, stating, "The Battlehawks' aerial prowess makes them more than just the sentinels of the skys [sic], it makes everything within sight of the Gateway Arch theirs."

The league says the logo pays homage to the "brave pilots who battled and flew the aircraft that served as the inspiration for" the Battlehawks name.

But anyone not into the militaristic, manned flight aspect of Battlehawks' identity need not worry. A promotional video announcing the return of the team features a hawk soaring through the air as well as a couple of guys from the 2020 season dressed like hawks and cheering for the team, Budweisers in hand.

The official hype video didn't feature a Battlehawks super fan jumping through a flaming table, which was a misstep. The inclusion of Charles Lindbergh in the league's PR materials for the team was perhaps another.


As fans no doubt remember, during the abbreviated 2020 season, the Battlehawks drew solid television viewership as well as led the league in both attendance and tailgate antics.

COVID-19 shut down the XFL, leaving fans to wonder what might have been.

Dwayne "the Rock" Johnson bought the league later that year, and the 2023 season is scheduled to kick off in February.


About this morning's team reveal, Johnson said in a statement, "Every one of these logos has a unique energy, intensity, and electricity that each team and their fans will bring on game day. Now is the time for our fans to get behind a team – THEIR team –and wear these logos and represent their city with pride." 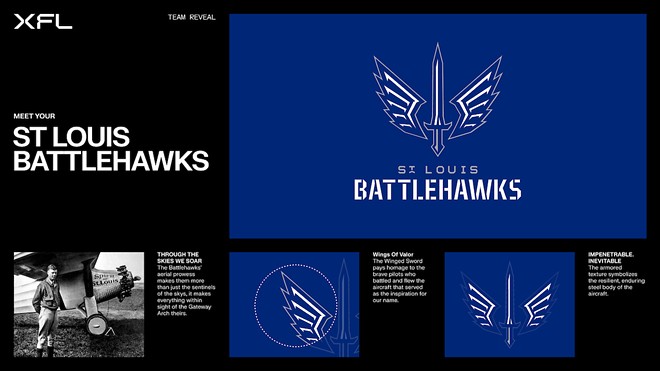 XFL
XFL promotional material explaining the mythos of the Battlehawk.