The Tale of a One-Armed Machinist, the KKK and a St. Louis River House 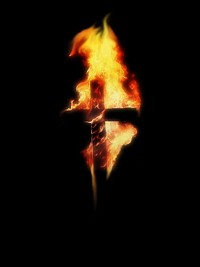 I met a guy the other day who lives in a home on the bluffs of the Mississippi River in south St. Louis. The house has a rather interesting history that merits a retelling.

Here it is -- as best as I can recall. The home was built in the 1950s by a one-armed man who owned a machine shop in north city. The homeowner also happened to be the leader of the local chapter of the Ku Klux Klan. (We'll get to that in a second.)

Anyway, he married a blind woman and builds this sprawling home with several balconies overlooking the river. He calls the home the "Love Nest" and decrees in his will that no other woman shall ever live in the home. His will also states that upon his death the proceeds from the sale of the property would go to David Duke, the former grand wizard of the KKK.

Okay, here is where it gets weird.

The guy's blind wife ends up dying and he marries another woman. She moves into the house and a few years later she also dies. Somewhere thereabouts the one-armed machinist has a stroke that causes him to go blind -- just like his first wife.

One day the guy is at home walking up the stairs to a balcony when he loses his balance and falls to his death. (The stairs only had railings on one side because a one-armed man only needs the use of one banister.)

So...after his death an attorney rules the will void. Why? Because the guy broke his own will when he moved his second wife into the house. Years later the current owner bought the house from the one-armed machinist's sister.

The homeowner says he still gets klan-related mail on occasion. He says, too, that there's still a KKK office in St. Louis. It's located in an unmarked building somewhere off Gravois Avenue in south city.