The Third Base Shuffle: Deja Vu All Over Again 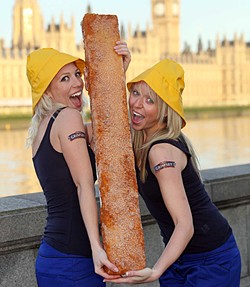 For some reason this image came up when I Googled 'third base'. I don't know what it means, but I'm showing it to you anyway.
Well, that's one day of spring camp under our collective belts. So what have we learned?
Two words: absolutely nothing.
That's right. I have no new epiphanies to share with you this morning. I have no revelations, or lessons, or realizations, either. What? Seriously? You thought I would have something smart to say after one damn day of camp? You obviously have waaayyyy too high an opinion of me.
Okay, fine. I'll come up with something. Just stop looking at me like that. Come on, Aaron, think. Think think think. Um, let's see...oh! I've got it! After one day of camp, it's already becoming clear the Cardinals' third base situation this year is eerily reminiscent of last year's. Yeah, I think I can turn that into a column.
All joking aside, third base is shaping up to be perhaps the most intriguing competition of the spring. What's strange is it's almost exactly the same competition we saw last year.
Last year, David Freese came into camp the favourite to win the Cards' vacant third base job. Of course, the job was vacant going into 2009 because of Troy Glaus' sudden shoulder surgery which would keep him out for nearly the entire year. Playing the role of David Freese this year will be...David Freese. Once again, Freese should be the favourite to win the job. He combines a plus glove with solid offensive production, making him seemingly the safest bet to be at least an average player at the hot corner.
Unfortunately for Freese in 2009, his hopes of taking firm hold of the third base job were derailed by a car accident during the offseason. This year, his hopes took at least somewhat of a hit when he was arrested for driving under the influence. The moral of the story: all Cardinal third base prospects and David Freese should stay clear of automobiles at all times.
click to enlarge

Here's A-Rod, a third basman, letting a guy get to second base. Still third base related!
Besides Freese, the 2009 candidate list went like so:
Joe Mather - Minor-league shortstop turned minor league third baseman turned athletic outfielder attempting to turn back into a third baseman. Chances were hurt by a wrist not fully healed following surgery.
Brian Barden - Defensive specialist from the Arizona system. Won playing time early and earned a place in the nightmares of Cubs fans, but ultimately didn't hit enough and was banished once again to the minors.
Allen Craig - At the plate, Allen Craig is a really good hitter. In the field, Allen Craig is a really good hitter.
Joe Thurston - Career journeyman brought in as a utility player; intriguing on-base skills.
Tyler Greene - Look, we already have a Greene to play shortstop. Um, I don't know; try third.
And now, the 2010 list:
click to enlarge

commons.wikimedia.org
Okay, fine, here's one that actually relates to something in this story. This is Joe Mather.
​Joe Mather - Still Joe Mather. His wrist is still the biggest question mark in his game. Sure, he says it's healthy, but trusting players on their health is never a great idea.
Allen Craig - Boy, that kid can hit.
Ruben Gotay - Career journeyman brought in as a utility player; intriguing on-base skills.
Tyler Greene - Well, see, we actually might have a spot at shortstop this year. We're kind of hoping we don't, but, you know. Brendan Ryan did just have wrist surgery, after all. Still...maybe you should try third again?
And, just in case you were looking for a really bad idea:
Nick Stavinoha - Um, I got nothing. He's Nick Stavinoha. I really shouldn't have to say anything else.
So Brian Barden moved to the Marlins' organisation and Nick Stavinoha wants to be an infielder now. That's it. Otherwise, it's exactly the same situation we had last year. Oh, sure, Joe Thurston was replaced with Ruben Gotay. Guess what? Ruben Gotay and Joe Thurston have never been seen in the same place at the same time. I don't think that's a coincidence.
The question, of course, is how it will all work out this year. We saw how the 2009 version of this drama played out. Thurston made the club out of spring training as a utility player and proceeded to drive us all crazy for the next couple months with his ridiculously bad baserunning and terrible throws across the diamond which consistently put Albert Pujols in harm's way. Thurston's playing time scaled back only once the Cardinals went and traded Chris Perez and Jess Todd for Mark DeRosa and his bum wrist. (By the way, are wrist injuries the new shoulder injuries for the Cardinals these days?)
What I'm hoping for, honestly, is a healthy and resurgent Joey Bombs to come in and take the third base job by the throat. I'm not counting on it; I fully expect David Freese to win the job and be perfectly, wonderfully adequate. and I'm okay with that. But if you're asking me what I would like to see, I think Mather would represent the best opportunity for an impact player at the hot corner.
Personally, I don't think Tyler Greene has much chance of winning the job, but mostly because I don't trust Brendan Ryan to be ready for the beginning of the season. Sure, the club says he'll be ready, but we've heard that same shuck and jive plenty of times before. Hell, Troy Glaus caused the whole mess at third base last year with his shoulder problem; he was supposed to be ready by the first of May. His first plate appearance for the Cardinals came on the second of September.
Gotay is the real wild card here. He's got the veteranness factor going for him, and he certainly fits the mold of a Tony La Russa bench player. Just please don't let him turn out to be the sequel to Thursty Joe.
In the end, I think Freese wins the job. He's too solid across the board for anything less than a spectacular performance by someone else to unseat him. And, of course, there's every chance Freese will go out after winning the job to celebrate and end up on the news. So there's that to look forward to.