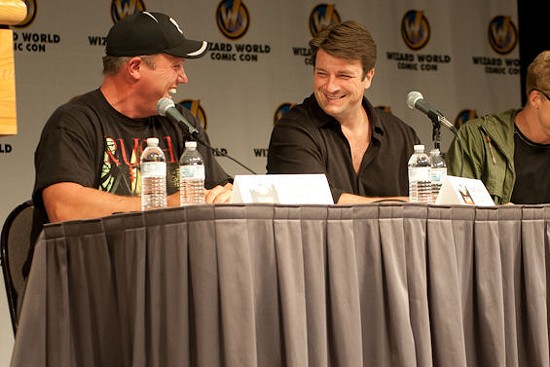 Jon Gitchoff
When Adam Baldwin and Nathan Fillion are together, we're in our happy place.

After spending three straight days rubbing elbows with tens of thousands of costumed fans, drooling over dozens of high-profile celebrities and spending two months' rent on sketches and t-shirts, we may need to take a short breather from the comic book world.

But, by Thor's hammer, Wizard World was quite the journey.

A traveling comic con that combines nerdery with general pop culture (See our cover feature for the company's back story), Wizard World returned to St. Louis for its second three-day visit April 4-6. Record crowds pushed the event from the America's Center into the Edward Jones Dome, and it was obvious that the region was still thirsty after tasting Wizard World wine for the first time in 2013.

With a bigger registration/photo op/show stage area happening in one of the large halls, "We're here, plus in three more halls, the Dome and the Ferrara Theatre," Wizard World PR director Jerry Milani told Daily RFT. "It just keeps growing, and St. Louis has been good to us." Milani told us that Wizard World has at least 20 events planned for 2015, with next year's convention in St. Louis happening May 15-17.

At a convention like this, it's impossible to see or do everything -- there are activities, panels, meet-and-greets, photo areas, contests and merch tables available nearly 'round the clock and concurrently, and we missed out on things like the Doctor Who panels and nerd-focused speed dating.

But three Q&As clearly stood out to us among the weekend's many top opportunities.

Click to the next page to read about the horrifying phone call Bruce Campbell made to some random guy's wife.