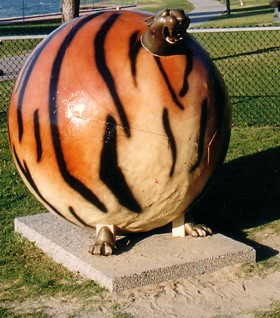 Haven't broken this photo out for awhile. Feels good.
The Missouri Tigers have only lost two games this year; one to a Kansas State team which simply bullied them all over the floor, surprising the Tigers into losing their composure, and one to Oklahoma State. The Oklahoma State loss was a true trap game, a contest against a lesser opponent coming off a huge, important, emotional win.
The win in question was the Tigers' victory over Baylor in Waco in late January, and they laid a mighty egg in their trip to Stillwater four days later. The defensive effort in particular was sorely lacking, and against an offense as talented as the Cowboys' that's a recipe for disaster. Oklahoma State shot almost 60% from the floor, and the Tigers simply couldn't counter, losing 79-72.
Well, it was time for a rematch last night, and Missouri played significantly better this time. Okay, that's a bit of an understatement. They played really good. Okay, that's still a bit of an understatement, and poor grammar to boot. Mizzou went straight-up Ezekiel 25:17 on Oklahoma State last night.
Yeah, that works.
Don't be fooled by the 18-point deficit in the box score; the game wasn't anywhere near that close. The Tigers pushed their lead as far as 35 points at one time; the last five minutes of the game were played mostly sans starters.
This was, quite possibly, the single most complete, impressive win of the season for the Tigers. Every aspect of Mizzou's game worked almost flawlessly, from the transition game to the shooting touch displayed by several Tigers in building the lead to the defense, which was stifling for the whole time the outcome was still in question.
Notes:
Nearly everything went right for Missouri, but they also helped things go right. They shot absurdly well, particularly in the early going, but they were taking smart shots, too, which makes all the difference in the world. Defense is as much about want-to as it is skill, and the Tigers showed as much want-to as they have all year. Stat of the night: Oklahoma State shot less than 36% from the field in the first half. That's how you put a game away early.
The win also made this current group of Tiger seniors the winningest in the history of the program with 101 victories. That's an awfully impressive number, and a credit to what Mike Anderson built. The way he left was a little ugly, but there's no denying the success his team has had. Strange that it took another coach coming in to bring the Tigers their greatest gains.