Send a News Tip
What we missed in the world of sports this weekend. 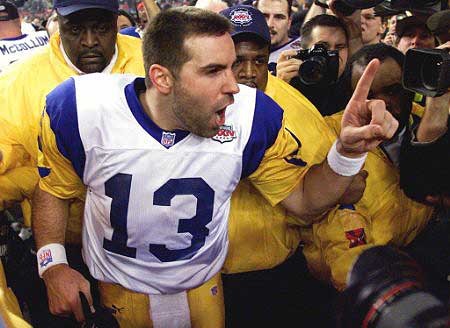 - The power of Christ compels him. Kurt Warner leads the Arizona Cardinals (!) to the Super Bowl.
- Get Bunk and McNulty on the scene. There was a homicide in Pittsburgh on Sunday when Big Ben and Troy Polamalu killed Baltimore's AFC championship dreams.
- Just a tad better than last year. SLU beat George Washington 63-59 on Saturday, scoring 43 more points than they did against the Colonels last year when they set a modern record for fewest points scored in a game. With a game high 18 points, Kevin Lisch almost single-handedly topped the 20 the Bills put up on January 10, 2008.
- It was all Mateen Cleaves' fault. Michigan State beats Illinois on the night that the lil'-point-guard-that-could's jersey was retired.
- What football team? Mizzou trounces Iowa State, looks like a contender in the Big 12. They still have to beat Texas, Oklahoma and Kansas though.