These Six Tattoo Artists Are Changing St. Louis, One Body at a Time 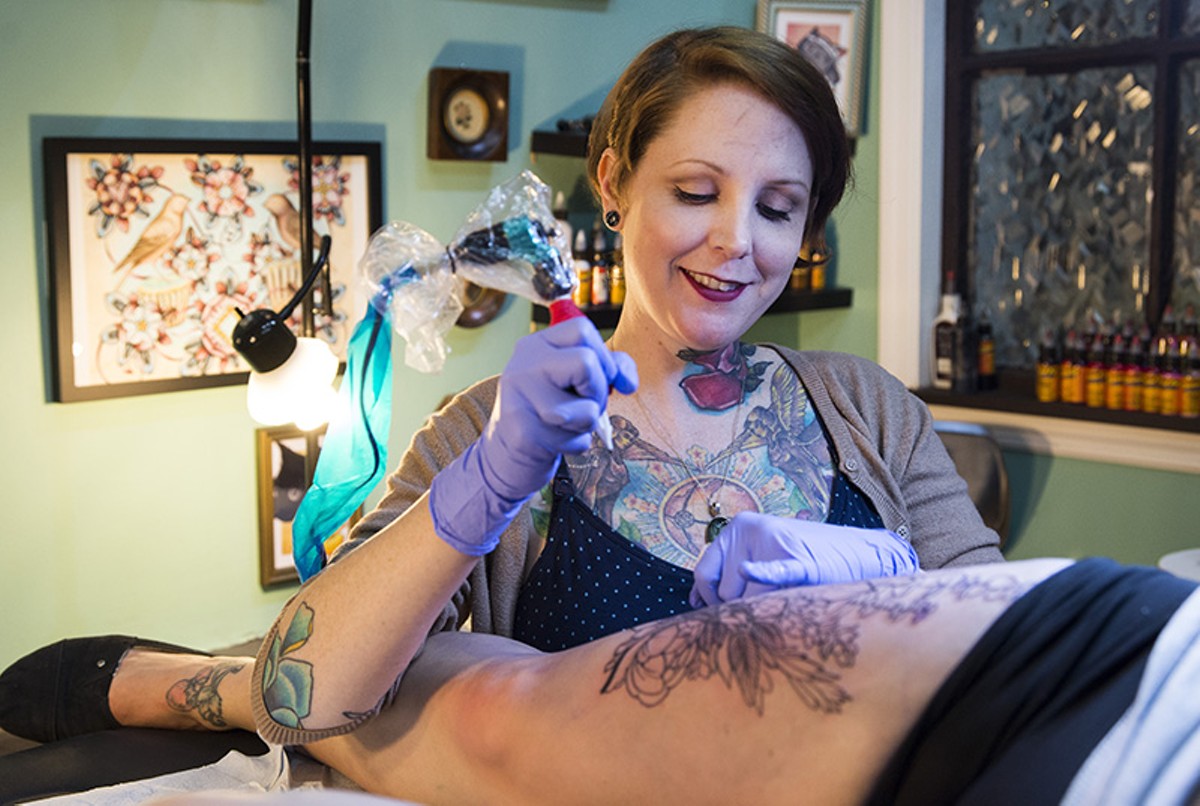 When he talks about his work as a tattoo artist, Sean Baltzell like to repeat an old adage: "Prostitution may be the oldest profession in the world, but the prostitute definitely had a tattoo."

An abbreviated history of the artform lines the walls of Baltzell's storefront at Tower Classic Tattooing. The printed designs known as flash — classic roses, eagles, reapers, tigers, sparrows, skulls, wolves, daggers and pinup dames, the oldies but goodies that you've seen time and again — hang in black frames on exposed brick walls. "That was the Pinterest before Pinterest was Pinterest," Baltzell says.

The selection isn't random; the designs in this vintage collection span decades of the 20th century, mostly the years between the 1940s and '80s.

"I've always been into history, I like tradition, I like things that are being passed down," Baltzell says. He's crafted his flash assortment to reflect this. He seeks out certain artists and hunts for recreations of designs that catch his attention.

To Baltzell, what he's doing isn't so different from what the original tattooed Americans — most often soldiers, sailors and criminals — did when they curated tattoo collections on their own skin: traveling, taking a process inspired by more meaningful rituals in other cultures and choosing the designs they found appealing. He's just looking for the flash that lasted.

"It's almost like the telephone game," he explains. "You can tell, 'OK, well, that guy painted Sailor Jerry's design, and then this guy repainted it.' You can see the change, the evolution or the de-evolution of the design when it gets passed down."

Though our tattoo scene doesn't tend to make it onto "top ten" lists, St. Louis can lay claim to significance in the art form's evolution. One of the longest-running tattoo shops in America, Trader Bob's Tattoo Shop, is located in St. Louis, and was founded by the legendary Bert Grimm, who spent a number of his early decades at St. Louis parlors.

These days, the Missouri Division of Professional Registration records 50 tattoo parlors in St. Louis City and County alone. If you consider the number of nearby shops in Illinois or just outside the county, there are even more artists to choose from. Each of these shops has its own personal flare; many artists follow in the footsteps of Grimm and other iconic traditional tattooers, while others branch out into modern and experimental styles.

We sought out a few of the most interesting, well-reputed artists working in St. Louis today, people who work with teams of just a few artists and who ink a range of looks and follow different philosophies. They are a just a sample of the excellent creators plying the tattoo trade here, but are an exemplary sample nonetheless — one with much to say about the past, the future, the art, and the life of the tattoo artist in St. Louis.