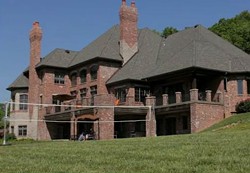 When Brooke Taylor was being treated at a Ballwin-area eating disorder clinic, she uncovered a devastating secret from her past.

In the course of her therapy at Castlewood Treatment Center for Eating Disorders, Taylor realized a close family member had repeatedly raped her, and that she'd been physically and sexually abused for years.

The problem is, she alleges in a new lawsuit, none of it was true.

Taylor is the third former patient to accuse the center of planting false memories, and manipulating her into a long and expensive course of treatment. Lisa Nasseff and Leslie Thompson, both of Minnesota, also sued Castlewood and its clinical co-director Dr. Mark Schwartz, accusing him of planting memories through hypnosis. Thompson alleges she was lead to believe she had 10 personalities and participated in a human sacrifice. Nasseff believed she'd been repeatedly raped and taken part in baby-eating satanic rituals.

Taylor's suit does not specifically mention Schwartz nor any belief in satanic cults, but it does say that her memories were implanted through hypnosis and psychotropic drugs.

"Defendant persuaded and convinced plaintiff to become increasingly isolated from her family by leading her to believe that a family member had been and would continue to sexually abuse her and force her to engage in horrific acts of abuse," the suit states.

The suit alleges that Taylor was targeted for her ability to pay for the pricey in-patient treatment, and that her final bill at Castlewood came to $80,000. She is being represented by the same attorney as Thompson and Nasseff.

Castlewood's executive director hasn't returned a message left for her, but a statement released to the Post-Dispatch echoes its previous denials in the Thompson and Nasseff suits.

"Litigation filed by a plaintiff's attorney contains numerous false, absurd and bizarre allegations that we patently reject," says a statement on the Castlewood website. "False allegations of this sort belittle the efforts of dozens of dedicated and trained healthcare professionals who are working every day to help clients address and recover from eating disorders."