This Has Nothing to Do With August Busch IV 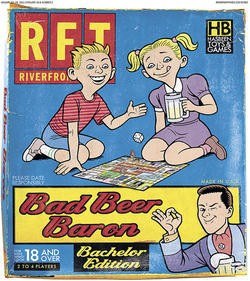 While digging through the RFT toy chest last week, we stumbled on the most amazing thing: a vintage edition of a game called Bad Beer Baron: Bachelor Edition.

The game pits a bevy of attractive women against each other in pursuit of a wealthy beer magnate. But, it warns, "many, many beautiful women have tried to play this game -- and ended up dead."

Now, you might find yourself thinking of August Busch IV, the ousted CEO of Anheuser-Busch, who found himself in the news yet again a few weeks ago after his girlfriend was found dead in his Huntleigh mansion.

But don't go there. This has nothing to do with August Busch IV. Nothing, we tell you!

Sure, the game focuses on an eligible bachelor whose girlfriends have a habit of making their way to an early grave. And, yeah, you could certainly say that's true of Busch. (Prior to Martin, who was found dead in the bedroom, Busch faced a criminal inquiry over the death of Tucson bartender Michele Frederick. Her dead body was found thrown from Busch's wrecked Corvette after a night of drinking. Although police found Busch half-naked and bloody at his townhouse, he pleaded amnesia, and charges were never filed.)

There are other violent incidents in the Busch family saga, too. There was Uncle Billy Busch, who bit the ear off a man in a bar brawl. There was Uncle Peter Busch, who killed a friend by tossing a shotgun onto the bed just a wee bit too forcefully. None of the Busches have ever served a day in jail for any of these incidents.

But none of that has anything to do with the game we unearthed! As the directions for Bad Beer Baron make clear,

This game is a work of pure fiction. Any resemblance to real people, events, actual beer barons or real dead girls is only a matter of coincidence.

Did you hear that, y'all? This has nothing do with August Busch IV!