Those Not So Loveable Arizona Cardinals 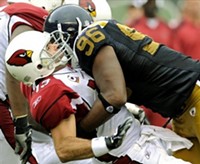 If the Steelers smack the Cardinals as hard as Pierce, the game will be over in no time.
While many of us here in St. Louis (RFT included) are fawning nostalgically over our former NFL franchise in Arizona and our beloved ex-quarterback Kurt Warner, not everyone is in love with the underdog Cardinals.

Count Slate writer Charles Pierce as one of the team's biggest detractors. His piece this week  is a must-read if only for the author's colorful descriptions and poison tongue.

Pierce complains that the Cardinals' "landfill of a division" (the NFC West) is the only reason the franchise got a spot in this weekend's Super Bowl. Had the team competed in a division north of the Mason-Dixon line, argues Pierce, they'd have finished middle of the pack in perhaps every league but "the Ivies."