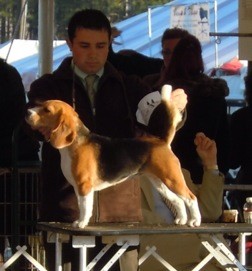 courtesy Kathleen Weichert
Jazzy, one of the two beagles from Belleville who will be competing at the Westminster Dog Show tonight.

This is a great time of year for dog-lovers. Last weekend was Animal Planet's Puppy Bowl VIII in which adorable puppies tumbled around a miniature football field and wrestled over soft toys. Yesterday was the Beggin' Pet Parade in Soulard, the canine version of Mardi Gras (though the female dogs didn't get beads for showing their teats). And tonight is the Super Bowl of dog shows, the 136th annual Westminster Dog Show, a more dignified affair celebrating aesthetic perfection and good behavior. Tumbling and wrestling and bead-throwing are all strongly discouraged, but the dogs still look adorable as they trot around the ring alongside their handlers, especially when they let their tongues hang out.

This year, three -- yes, three! -- local dogs will be strutting their stuff at Westminster: Grand Champion Insignia IndyGeaux Dotts, or Indy for short, a Dalmatian from St. Charles; and Ch K-Run's Lanbur the Truth All Around and So You Think You Can Dance All Around, aka Allie and Jazzy, two beagles from Belleville. Allie happens to be the half-sister of Ch K-Run's Park Me In First, known familiarly as Uno, who won Westminster's Best in Show award in 2008.

The show is at Madison Square Garden in New York, but you can cheer the pups on from home this evening, when the show will be broadcast on USA (from 7-8 p.m.) and CNBC (from 8-10 p.m.). Indy will be competing in the Non-Sporting category, while Allie and Jazzy will be in Hounds. The finals will be on CNBC tomorrow.

This is the first Westminster appearance for all three dogs. Both Allie and Jazzy are very excited, says their breeder, Kathleen Weichert of K-Run Kennels in Belleville.

image via
Indy, strutting her stuff aboard a fire truck.

In order to qualify for Westminster, a dog must be an American Kennel Club champion, which means she needs to have won at least two major shows and 15 AKC points. (Dogs receive points for how well they do in competition.) To become a grand champion like Indy, a dog needs three major wins and 25 additional points.

The top five dogs from every breed are invited to Westminster; everybody else has to go through a lottery. This year was especially difficult because, due to construction at Madison Square Garden, participation was limited to 2,000 dogs instead of the usual 2,500. Both Allie and Jazzy got in through the lottery.

"We were pretty lucky," Weichert admits. "I know a lot of people from the area whose dogs didn't get in."

Indy, however, scored one of the coveted invites. She will be one of just nine Dalmatians competing and is considered one of the top contenders in her category, though she's not one of the most active dogs on the show circuit. "She's our pet," explains her owner, Kathy Ryan-Hogan. "We like having her around."

In addition to being a show dog, Indy is also a local celebrity: She tours firehouses in St. Charles and St. Louis counties playing the role of fire dog to entertain small children. Indy is still fairly young -- three years old -- and Ryan-Hogan envisions her spending more time as a therapy dog after she retires from the AKC circuit.

Not that Indy dislikes being in the ring. Quite the contrary. At the AKC/Eukanuba National Championships, in which Indy has competed for the past two years, Ryan-Hogan says she was teased by the other owners because of her dog's enthusiasm. "She looks like she's in a beauty pageant," she explains. "She makes eye contact with all the judges, like she's doing a pageant wave. She starts grinning when she hears the applause."

Uno's unexpected victory four years ago gave hope to Ryan-Hogan and other local dog owners and breeders that their animals might also win at Westminster. The champion, however, has not been available to offer advice and wisdom, even to his sister Allie. He moved to Texas to be with his owners after his Westminster win and hasn't been heard from since.

"Do I think either [Allie or Jazzy] will follow in Uno's footsteps?" Weichert asks. "No. There will never be another Uno. I was lucky to have him. But they're both good show dogs. Allie is more amenable to behaving, while Jazzy is bad." She laughs. "Spunky."

Neither Ryan-Hogan nor Weichert will be trotting around the ring at Westminster with the dogs. Ryan-Hogan believes a male handler keeps pace better with Indy's energetic gait. Weichert is recovering from knee surgery and says she wants to dogs to look their best. Instead, Allie and Jazzy will be guided by handler Rindi Gaudet. But both owners will be in the stands watching, Weichert accompanied by Allie and Jazzy's owner, Jana Rodes of Argyle, Texas.

"Their chances are as good as anybody's," Weichert says. "I hope the judges think so, too."

"I'm anxious," Ryan-Hogan confesses. "This is such a thrill. I grew up watching the Westminster show, but you never think your own dog will get to be in it."

Update, 5:15 p.m. -- Weichert has informed us, via e-mail, that Allie won Best of the Opposite Sex in her category, fifteen-inch beagles. (There's also a category for thirteen-inch beagles.) This year's top fifteen-inch beagle was a male dog named GCH Belcanto Flags A'Flyin, but in an oddity of Dog Show World, the judges got to pick another winner from among the females.

Sadly, neither Jazzy nor Indy won any awards.

image via
Allie in her moment of triumph.