Send a News Tip
It was a hell of a ride while it lasted. Alas, nothing lasts forever, and Missouri is going home, richer for the experience, but still disappointed.
Personally, I absolutely hate losses like that. I could handle it if they had gotten blown out; hey, you just ran into a much better team. But this was an extremely beatable UConn team. This was a simple case of the Tigers going cold at the worst possible time.
After the Tigers hung 102 on Memphis, they looked almost unstoppable, a team that not only could grind you into the ground with their defense, but that could put up a big number on the offensive end of the floor, too. Memphis was one of the best defensive teams in all of college basketball, and Mizzou just overwhelmed them.
So what do they do against UConn? Well, they didn't hit triple digits, that's for sure.
click to enlarge 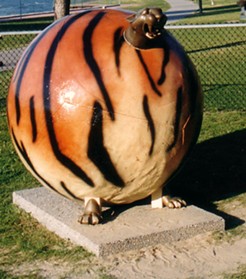 citywindsor.ca
Tigerball. Get it?
There was a run, not quite midway through the second half, when Missouri either forced a turnover or prevented the Huskies from scoring five possessions in a row. It was only about a two-point Connecticut lead at the time, and you could feel the winds switching, blowing at the Tigers' backs.
Five possessions in a row, Mizzou prevented UConn from scoring. And how many points did the Tigers themselves garner in that run?
Zero.
That's right, zero. Missouri had UConn on the ropes and they just. Couldn't. Score. They were ice cold from the field, their free throw shooting was nothing short of brutal, and they seemed tentative on offense, looking constantly to kick the ball back out to the perimeter rather than risking a drive into the teeth of the Husky defense. And against a team as disciplined as Connecticut, you don't get many openings.
I don't know, maybe the Mizzou players were just a little starstruck, not by their opponent, but by the situation. They seemed to be playing a little tight from the very beginning; the defense was softer than what it had been in previous contests, and very few of the Tiger players really attacked the basket. The best way, maybe the only way, to counter a presence like Hasheem Thabeet down low is to attack him, try to get him in foul trouble. Instead of doing that, the Tigers would drive then kick the ball back out, over and over and over.
Plus, I will admit, it doesn't help when you have a freshman point guard for the other team who's basically just throwing the ball up from anywhere and can't seem to miss. (Kemba Walker, I'm looking at you.)
Bottom line, the Tigers probably should have won that game. UConn is a very, very good basketball team, but I think they were entirely beatable. But when it came right down to it, Missouri just couldn't capitalize on too many scoring opportunities. Hey, sometimes that's the way it goes.
Now Mike Anderson can take the cache that comes with an Elite Eight appearance back to Mizzou with him and start leveraging that into recruiting. They're going to need the help, with DeMarre Carroll, Matt Lawrence, and Leo Lyons departing after the season. It certainly hurts now to see them make it so far and lose, but this is a huge stepping stone for the program to get back to national prominence.
And if nothing else, my opening remains true at least: it was a hell of a ride.