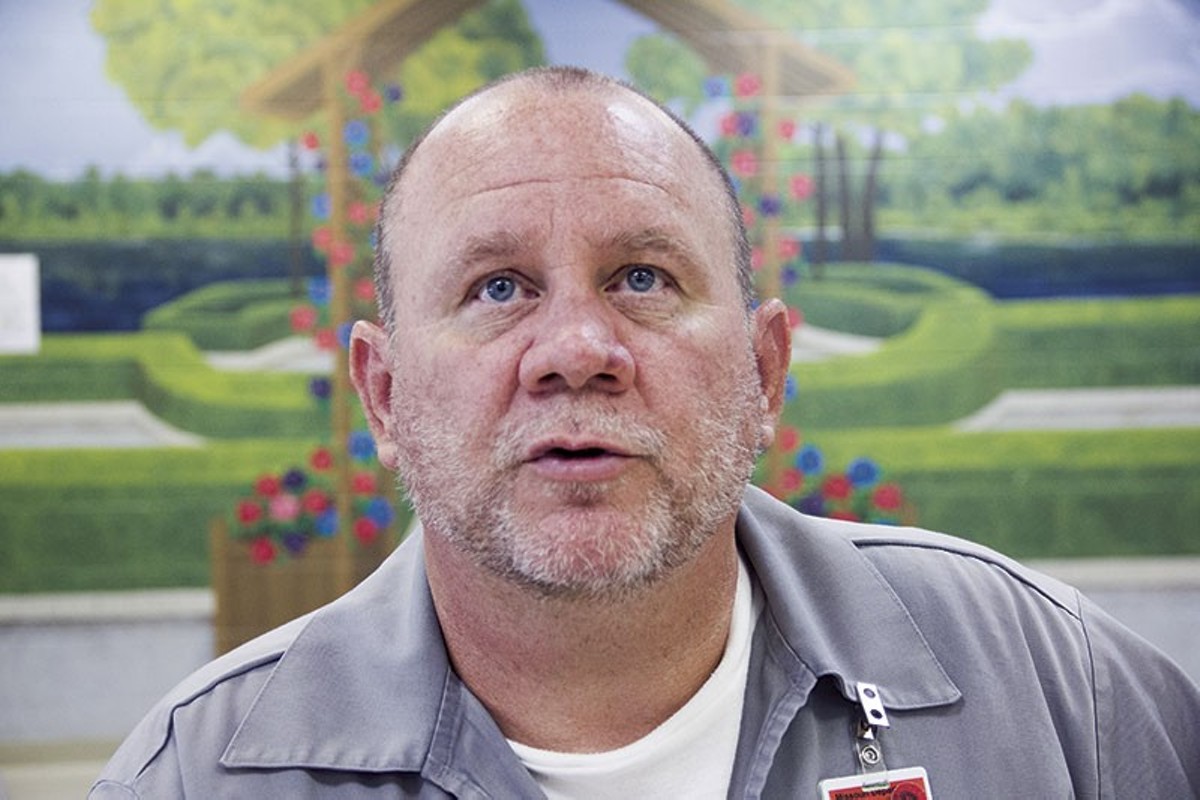 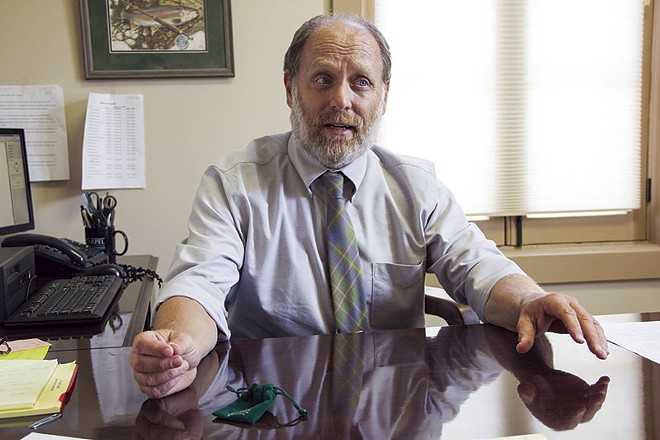 Last year, a letter arrived at Tim's cell in the Southeast Correctional Center in Charleston.

Dated September 20, the letter's stationary bore the name of none other than Carl Kinsky. Tim was flabbergasted. He hadn't heard a word from the prosecutor since the disastrous 2004 trials, whose verdicts Tim had been fighting (unsuccessfully) in various appeals ever since.

In the letter, Kinsky revealed he'd had a change of heart.

There were nagging issues with the trial itself, wrote the prosecutor. Kinsky noted that jury members in Tim's second trial had voiced their confusion about what a "life sentence" really meant. Before reaching their verdict, the jury had gone as far as to send a written question to Judge Kenneth Wayne Pratte, asking if the option for the life sentence came with parole.

At the time, Tim's attorney argued that the jury absolutely needed to know that any sentence they chose would, by law, be served without possibility of parole.

That was owing to an unusual component of the law under which Tim was sentenced. Overall, very few people serve the entire sentence proscribed by a judge or jury. Even offenders convicted of violent crimes are afforded the opportunity to make their case before the parole board. Did you stay out of trouble, make restitution, get your GED or complete drug treatment courses? That could be the difference between freedom and ten more years in prison. As a result, Missouri currently houses around 32,000 inmates in its penitentiaries, while an additional 15,000 convicted offenders are out on parole. (Another43,000 are serving probation without having ever set foot in prison.)

But the 350 grams of meth pulled from Tim’s trailer had triggered a little-known provision in Missouri law. The provision –- which the state legislature has slated for repeal effective January 1, 2017 — stipulates that anyone convicted of trafficking more than 90 grams of meth automatically loses eligibility for parole. 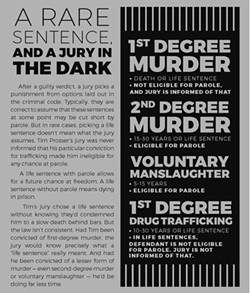 GRAPHIC BY KELLY GLUECK
Tim Prosser's jury handed down a sentence without being fully aware of just how long it would be. Click in for more detail.

The jury wasn't told that. Tim's attorney failed to convince the judge that their questions about parole deserved an answer. According to a transcript of the exchange, Kinsky argued that Missouri law is very specific about a jury's responsibilities: They can determine guilt and punishment, that's all. The law leaves no room to include the separate matter of parole.

Judge Pratte agreed with Kinsky. He left the jury members to their confusion, writing back: "The Court is not allowed to give you any further instructions on the matter."

In the 2015 letter, Kinsky implied that Tim would have been better off being convicted of murder in the first degree. Murder carries a possible punishment of life without possibility of parole. However, the language of the murder statute actually permits a jury to be informed that a life sentence means just that — imprisonment until death.

That wasn't the case for a drug trafficking conviction like Tim's.

That murder and drug trafficking carry similar punishments but different jury instructions bothered Kinsky to the core. It was a clear inconsistency in the law, he would write in his letter to Governor Nixon, years after Tim was sent away for life.

"I argued against the judge so informing the jury, but now find it unconscionable that a defendant in a murder trial has the benefit of a jury being so instructed, but not Timothy Prosser," Kinsky wrote.

The prosecutor walked a narrow line in his statements to Nixon. Kinsky conceded no mistakes or faults in his handling of the case. Instead, he appealed to the obvious injustice wrought at the hands of the law.

"In my opinion, Mr. Prosser was clearly guilty," Kinsky's letter concluded. "His decision to proceed to trial was likely the result of poor judgment caused by his drug abuse. His conduct merited substantial punishment. Nevertheless, it did not merit this punishment and it did not merit this punishment from a jury that was not fully advised of the consequences of the sentence it assessed."

In an interview last month with Riverfront Times, Kinsky reiterated his opinion that Tim certainly deserved to go to prison for cooking meth — but not for the rest of his life.

Tim's sentence "has preyed on me for a while," Kinsky says now. "Time gives you some distance. I've had cases where I've had qualms about the punishment, but this one seems to be in a completely different class."

After nearly twenty years, Kinsky is ready to leave the prosecution business altogether. Now in his fifth term, he's decided not to run for reelection after this term runs out in 2018.

Kinsky believes Tim was tried and sentenced by the book. But the resulting sentence eats away at him.

"Life without the possibility of parole means death in prison," says the prosecutor. "It means you're leaving prison feet-first no matter what. If he lives to be 500 years old, he still dies in prison."

Kinsky isn't the only one with complicated regrets. In 2008, Tim's family managed to locate one of his jurors from the 2003 case.

The juror, Mary Elise Samson, said she had no doubt as to Tim's guilt. But she had been stunned to discover the reality of Tim's life sentence. In a notarized affidavit, she claimed that the jurors had deliberated assuming Tim was eligible for parole — the faulty assumption left uncorrected by Judge Pratte's order.

"We were concerned that Mr. Prosser would be out on parole in a short period of time; whereas with the life sentence he would be incarcerated for a longer period of time before becoming eligible for parole," Samson wrote. "If the jury had been informed about the parole issue when we requested clarification, I am confident that we would have selected the lengthy sentence instead of life imprisonment."