Timothy Krajcir: Inside the Mind of a Serial Rapist and Murderer

As might be expected, Timothy Krajcir, who authorities announced earlier this week has confessed to nine cold-case killings in Missouri, Illinois and one other jurisdiction, did not have a good childhood. 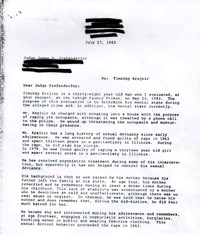 “His lack of stability was accentuated by a mother who he describes as cold and unaffectionate,” states a 1983 psychological profile (click on image at right to download) that was submitted to a Pennsylvania court by Dr. Paul Gross and obtained by the Southeast Missourian in Cape Girardeau. “In therapy, he was told that he hates his mother and does remember that, during the mid-sixties, he did feel much hatred for her.”

On Monday Krajcir, who has been in and out of prison since 1963 and has been continuously incarcerated since 1983 because of his history of sexual deviance, pleaded guilty in Jackson County Court in Murphysboro, Illinois, to the 1982 slaying of Deborah Sheppard, who at the time was a student at Southern Illinois University Carbondale. He was sentenced to 40 years in prison.

Hours later law enforcement officials announced that Krajcir had also confessed to a string of murders that terrorized the city of Cape Girardeau in 1977 and 1982, as well as three slayings in another jurisdiction.

Among his victims in Cape Girardeau: Mary Parsh and her daughter Brenda Parsh, Sheila Cole, Margie Call and Mildred Wallace. Although Cape Girardeau Police Chief Carl Kinnison said that Krajcir had also confessed to three slayings in another jurisdiction, he declined to elaborate.

Gross’ letter then goes on to detail Krajcir’s “long history of sexual deviancy,” stating that Krajcir, raised by his mother, “became shy and introverted during his adolescence and remembers...fondling women in public and wearing feminine clothing.”

According to Gross’ letter, Krajcir spent thirteen years in an Illinois prison on a 1963 rape sentence. Gross states that during the rape, Krajcir “did stab his victim.” In 1979 -- two years after he’d killed three of his victims in Cape Girardeau -- he was found guilty in Illinois of raping a thirteen-year-old girl.

Though Krajcir was deemed a “sexually dangerous person” and could legally have remained incarcerated until he convinced authorities that he’d been rehabilitated, he was paroled two years later in 1981.

Once paroled -- and presumably after killing and raping Margie Call and Mildred Wallace in 1982 -- Krajcir transferred his parole to Pennsylvania, where an attempted rape led to Gross’ psychological evaluation.

Gross, who at the time did not know the extent of Krajcir’s crimes, noted that he was a “cold, detached man” who “feels ‘no remorse’ for what he has done.”

“He somehow tries to justify his behavior on his past childhood experiences and once was told by a therapist that he is action out his anger towards his mother on other women,” wrote Gross. “His rapes have been proceeded [sic] by intense fantasies of sexual abuse and rape on women.”

Gross closes by stating, “Other than his sexual deviancies, Mr. Krajcir shows no evidence of any psychiatric illness.”

Once he was released from prison in Pennsylvania, Krajcir was transferred back to Illinois in 1988 on a parole violation and has been held there ever since as a “sexually dangerous person.”

The cold cases first broke when when Lt. Paul Echols of the Carbondale Police Department submitted DNA evidence from the Sheppard crime scene that matched Krajcir.

Noticing the similar time frame between the Sheppard murder and the Missouri killings, Cape Girardeau detective Jimmy Smith contacted Echols about a possible link between Krajcir and the cold cases in Cape Girardeau.