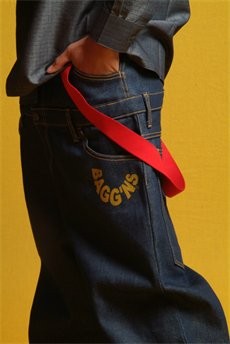 baggns.com
Note the upper and lower waistbands (and four-pocket front) of the original Bagg'ns design.
Three years ago Thomasina Clarke struck upon an idea to alter a clothing fad she finds reprehensible. That fashion statement? Saggy pants that expose people's underwear.

Outfitted with a sewing machine and a roll of denim, Clarke retreated to her home in north St. Louis and crafted the first-ever pair of Bagg'ns -- a jean featuring two waistbands. The top waistband fits snug around the hips to hold the pants up. The second hangs low around the buttocks to give the illusion of saggin'. Clarke then came up with the first of several slogans for her creation. "Bagg'ns: If you must sag -- sag respectfully, sag responsibly."

After finding a Los Angeles company to manufacture the pants, Clarke held a launch party in December 2008. Now she's working hard on a second-generation of Bagg'ns, which she promises to be more "off the chain" than the original.

This morning Daily RFT caught up with Clarke to learn more about her product, her vision and her extreme distaste for the public flaunting of one's undergarments.

baggns.com
Thomasina Clarke modeling a pair of her Bagg'ns for women.
Daily RFT: At least one St. Louis municipality tickets people for wearing saggy pants? Were you ever cited for that offense?

Clarke: Oh, no! I'm a woman. I don't sag. And my children (18 and 20) they don't sag either. But they appreciate the effort to sag respectfully and have worn Bagg'ns and received many comments. I've just always liked fashion and style, and I like saggy pants just not when they show off underwear.

Don't Bagg'ns defeat the thrill of saggin' -- ie. showing your Fruit of the Looms (and/or buttocks) to the world?

I don't think so. I hope that Bagg'ns can actually help raise the consciousness of people who sag for that purpose. It's about self-respect as much as it is respecting others. What are they saying now with the way they wear their pants? "F--- you?"

I don't know. I hope the way you see it today isn't here to stay. I hope Bagg'ns changes that. They still allow you to make a fashion statement and you don't have to walk bow-legged to keep your pants from falling off.

They're going all right. I've sold about 40 pairs that retail for $56. (Bagg'ns shorts go for $47 a pair.) They're available at three locations in St. Louis and online. I'm going to New York soon to market them there. And I'm real excited about the second-generaton of pants that will come out later this year.

Can you give us an idea of what we can expect?

I'm thinking of khaki Bagg'ns that could be worn to school. But like every Bagg'ns you can be assured that the next generation will be of the same high quality. And I want all the brothers out there who are packin' to know that Bagg'ns come with 14-inch zippers.

Packin'? You're not talking about guns are you?

No. I'm talking the love machine.