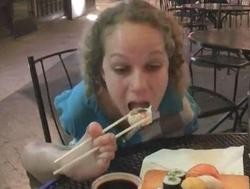 Yesterday, we wrote about Tisha Shelton, a.k.a. Tisha UnArmed, the 25-year-old Arnold resident and viral-video star.

We caught up with her later in the day to find out what it's been like to see her video views skyrocket to 1.6 million in a matter of days. And to ask an inevitable question: Have her homemade videos demonstrating everyday life without arms caught the reality TV circuit's attention?

First of all, Shelton reaffirms that making the videos -- showing her eating sushi, driving a car, applying makeup, and even taking a shower -- were not intended to attract Tinseltown's attention. She was trying to land a gig in graphic design. She says she's had a couple nibbles, even a request to see her portfolio from a firm in New York City, but nothing solid yet.

She says the reality TV show producers, however, are already knocking down her door.

"I was contacted by couple, three or four reality TV shows. Production companies that want to film and pitch my story to other networks," says Shelton.

That would, of course, allow her to stay here locally, close to friends and family as opposed to uprooting for a job. But is she really up for exposing herself that way?

She says at least one producer is already planning to fly in to talk to her about filming a pilot.

She's also been hearing a lot from physical therapists, doctors and parents of kids who have no arms, asking her how to train their patients/children to live an independent life like hers.

"Doors have opened where I could have a job doing that."