To Save Black Lives, Protester Bruce Franks Will Do the Unthinkable: Work with Cops

Can he really reform law enforcement from within? 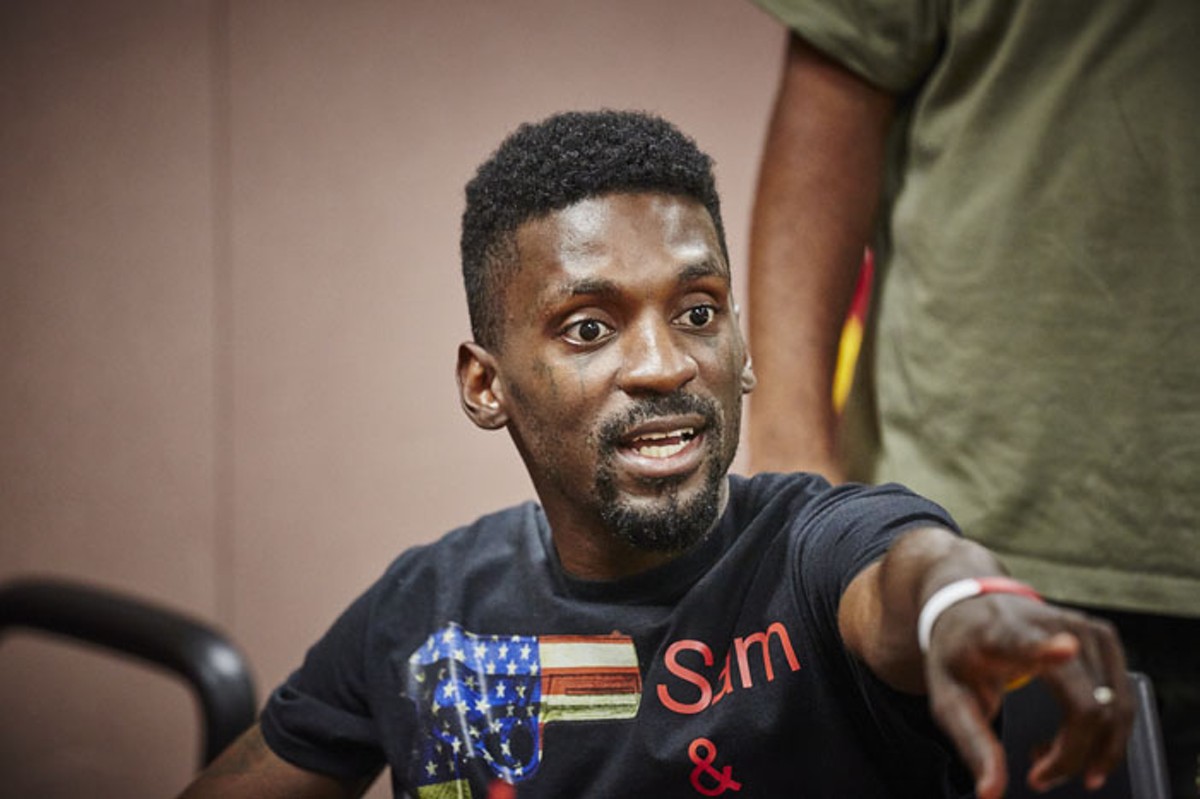 Black male. Age 30. Face tattoos and heavy eyelids. Wears a hoodie, drops St. Louis slang and even once caught a stray bullet. Franks is a battle rapper — stage name "Ooops" — who soldiered up on the frontlines of the Ferguson protests. When cops see him, he says, they see a thug — at least, the cops he isn't friends with.

But he is friendly with some cops. City police chief Sam Dotson texts him. City circuit attorney Jennifer Joyce tweets at him. Franks is not only a college-educated business owner, husband and father of five, but he's also an anti-violence activist, one who's trying to bridge the gap between the protesters and the protested. Which isn't easy.

Franks founded his organization, 28 to Life, in March. He's still waiting for the IRS to recognize it as a nonprofit. His primary mission, however, is clear: He wants to save black lives. All of them. He's well aware of the city's latest murder stats: Of the 133 total homicide victims in St. Louis from January 1 through August 25, 94 percent were black, and more than two-thirds of those were under the age of 30. Lately he's been seeking out that demographic in parts of south city, trying to hook them up with jobs and turn a few into activist-leaders.

At the same time, Franks believes that fatal police shootings of black residents, while far fewer in number, are an outrage — first because they're avoidable in many cases, and secondly because they devastate the community's trust in the system, without which the other murders won't get solved. So to tackle that problem, he has been working the halls of power.

Once a harsh critic of law enforcement, Franks has become a volunteer consultant who huddles frequently with the circuit attorney, police chiefs, police academy candidates, St. Louis City Hall leaders, and even the Department of Justice. He's been influencing public-safety policy at the highest levels — and doing it mostly behind the scenes.

"I got to know him and realized right away that when this person calls, I need to answer the phone," says St. Louis County police chief Jon Belmar. "He has no problem telling you when you've messed up, but he has the ability to listen and work things out. He's invested in this, and for the right reasons. I can't tell you how valuable that is."

Franks is not the only protester to move into policy work.

It's now been thirteen months since officer Darren Wilson fatally shot unarmed teenager Mike Brown in Ferguson, sparking the hashtag "Black Lives Matter" and nationwide demonstrations against police use of deadly force. Until recently, that movement took flak for being heavy on outrage but short on demands. Then, last month, several prominent activists launched Campaign Zero — a set of proposals ranging from officer body cams and de-escalation training to strong civilian oversight boards.

St. Louis native Johnetta Elzie, a member of the planning team and known on Twitter as @nettaaaaaaaa, says that Campaign Zero plans to win those changes by working with local, state or federal legislators. But directly with cops and prosecutors? Not interested, she says.

"I don't believe in them," says Elzie. "I'm all about going above them." Asked about Franks' efforts compared to hers, she says, "There's nothing wrong with doing both. We all need to do everything we can."

Franks' willingness to parley with law enforcers sets him apart in more ways than one. Some in St. Louis' protest base now consider him a traitor or spy, he says. It's expressed obliquely, whether through offhand comments (such as "Ooops is with the ops," which he recently overheard) or just a greeting that feels cold and short.

"I get why people are skeptical," says Mckesson, who moved to St. Louis during the Ferguson unrest and has since become a national voice for Black Lives Matter. "He doesn't play a role that I would play. But he has clear reasons as to why he engages this way, and he has integrity."

Even Franks himself sometimes marvels at his new role.

After nightfall on August 10 — one day after the anniversary of Mike Brown's death — protesters gather on the west side of West Florissant Avenue in Ferguson. They shout "We shut shit down!" at the cops bunched across the street. A helicopter thwumps overhead. Franks yawns.

"I can't wait for this to be over," he says, mellow and slow, as usual. "Not the protests. I'll always be a protester. I mean, the need to protest." He just wants justice to be done, he says, so they can all go home.

A few minutes later, he studies his cell phone, then shakes this head.

"Man, that's crazy," he says. A U.S. Department of Justice official has just texted him the words, "Be safe."

"A year ago," he says, "I didn't even know what the justice department was."