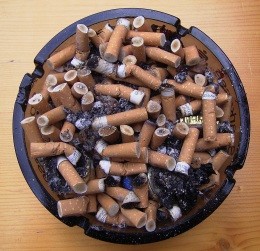 Image via
Mayor Francis Slay of St. Louis and Mayor Sly James of Kansas City support tell us they support Prop B
Critics of Proposition B -- which would jack up the state tax on cigarettes from 17 cents to 90 cents per pack -- are warning St. Louis and Kansas City: Don't vote for this! It will actually shrink your revenue!

Perhaps, but the powers-that-be don't seem spooked at all: Both our mayor, Francis Slay, and Mayor Sly James in Kansas City tell Daily RFT they support the measure.

The crusade against Prop B is being spearheaded by the Missouri Petroleum Marketers & Convenience Store Association, which doesn't like it for obvious reasons.

Image via
Joe Haslag, professor of economics at Mizzou
The lobby has commissioned a 48-page study by Mizzou economics professor Joe Haslag. Haslag points out in his study that none of Prop B's new tax dollars go directly into a city's pocket, but rather, toward schools and smoking prevention.

Indeed, proponents readily concede that the whole whole point of this initiative is to nudge folks to kick a habit that causes diseases we all must pay to treat via Medicaid.

And it should work, Dr. Haslag points out, for anytime you raise the price of a good, some people stop buying it. Granted, cigarette demand is fairly "inelastic," meaning it doesn't change much as prices rise (because people are addicted). But it does change: Many Missourians will quit, not to mention all the smokers in bordering states who might not think it's worth it anymore to drive across state lines into Missouri just to buy their Marlboros.

The problem with all this, Haslag writes, is that fewer packs sold means less sales and excise tax revenue flowing in to counties and municipalities.  Thus he projects an annual loss of $67 million, with St. Louis and Kansas City taking the biggest hits.

But Mayor Slay's staff e-mailed us to say hizzoner will vote "yes" on Prop B,

"for the same reason he supports clean air in enclosed spaces. Passage of Prop B will make Missouri a healthier state, making it more likely that adult smokers will quit and less likely that teens will begin smoking. If it passes, it will also reduce the public and private costs of health care for smoking-related diseases."

Similarly, Jackson County (in which much of Kansas City lies) will lose a combined $1 million in sales and excise tax inflows, Haslag estimates. But Danny Rotert, communications director for Mayor Sly James, says his boss is "supportive" of Prop B.