Todd Akin Has the Inside Scoop: Women Can't Get Pregnant from 'Legitimate Rape' [UPDATE from Akin Campaign] 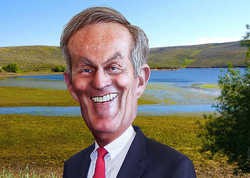 Trust me ladies, I'm a politician.

First of all, from what I understand from doctors [pregnancy from rape] is really rare. If it's a legitimate rape, the female body has ways to try to shut that whole thing down. But lets assume that maybe that didn't work or something. I think there should be some punishment, but the punishment ought be in the rapist, not attacking the child.

Obviously this is news to a lot of women and doctors...

McCaskill responded to her opponent, a longtime lover of life and hater of uterii, via Twitter:

The Washington Post, Gawker, and other national news outlets picked up the story almost immediately, and 'Todd Akin' was trending on Twitter Sunday afternoon.

Planned Parenthood asked users to donate to the cause in Akin's name, via Twitter.

Some of our favorite tweets about the Todd Akin crazy train below:

I'm suspecting @ToddAkin is the perpetrator of some of the worst "That's what she said"s in history of earth. #legitimaterape

And yes - Todd Akin is a member of the House Science and Technology committee. Weep for America.

Todd Akin is now furiously browsing WebMD and is like "fuuuuuuccccckkkkk".

I would love to hear more about this "shut that whole thing down" feature, @RepToddAkin. This feature is not in my manual.

Rep. Todd Akin: more out of date than a 1823 medical textbook. Literally: http://books.google.com/books?id=t7w0AAAAIAAJ&pg=PA437#v=onepage&q&f=false

@RepToddAkin You are the Ob-Gyn candidate , right? My vagina doesn't appear to have that magic venom you speak of , where can I find it?

STL-based conservative pundit Dana Loesch also took to Twitter, to say the outrage over Akin's comments is hypocritical and overblown. She's been going back and forth with critics @DLoesch

Did we miss any good ones? Tweet your favorites to @RiverfrontTimes

This morning the Akin campaign released the following statement on The Jaco Report interview:

As a member of Congress, I believe that working to protect the most vulnerable in our society is one of my most important responsibilities, and that includes protecting both the unborn and victims of sexual assault. In reviewing my off-the-cuff remarks, it's clear that I misspoke in this interview and it does not reflect the deep empathy I hold for the thousands of women who are raped and abused every year. Those who perpetrate these crimes are the lowest of the low in our society and their victims will have no stronger advocate in the Senate to help ensure they have the justice they deserve.

"I recognize that abortion, and particularly in the case of rape, is a very emotionally charged issue. But I believe deeply in the protection of all life and I do not believe that harming another innocent victim is the right course of action. I also recognize that there are those who, like my opponent, support abortion and I understand I may not have their support in this election.

"But I also believe that this election is about a wide-range of very important issues, starting with the economy and the type of country we will be leaving our children and grandchildren. We've had 42 straight months of unacceptably high unemployment, trillion dollar deficits, and Democratic leaders in Washington who are focused on growing government, instead of jobs. That is my primary focus in this campaign and while there are those who want to distract from that, knowing they cannot defend the Democrats' failed economic record of the last four years, that will continue to be my focus in the months ahead."

Users on Twitter are calling bullshit on the "misspoke" defense and asking Akin to step down.

Cuz he's soft on vaginas rt @PatrickRuffini By 80-1, GOP activists in my Twitter poll want Akin to step down as the nominee.

But will it be a cold summer in Missourah before the famously bull-headed Akin lets that happen? Something tells us it'll take a lot more than his well-documented and long-held social conservatism to push Akin out of this race.