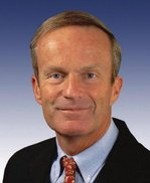 Depending on which prominent economist you talk to, a failure to raise the debt ceiling by 12:00 a.m. (EST) August 2, 2011 would either be "doomsday," "calamitous," "a calamity," "serious, and we probably would be thrown into a recession," "could provoke a renewed financial crisis," or something like that.

But U.S. Congressman Todd Akin (the Liberals-Hate-God guy), of Wildwood, thinks it might be just what American government needs to "experience what it is like to live within our means," as he said to the Post-Dispatch on Tuesday.

A default, of course, would possibly annihilate the nation's credit system by sending the trustworthiness of U.S. government bonds (the safest investments in the world) into free fall, consequently pushing America into a painful double dip recession. Which means, obviously, more people lose their jobs and we're back to where we started -- if not worse off than we were- in 2008.

But at least it would send a message to those damn Free-Spending Liberal politicians!

"The bad idea is to continue wild spending and to get to the point where it's game over, where debt service is higher than revenues," he told the P-D. A default "would shock us as a nation into saying that we really have to deal with this problem."

Akin, to be sure, is already doing his part to fix the country. That's why he's an original co-sponsor for the Cut, Cap, and Balance Act that passed the GOP-heavy House on Tuesday.

The bill, as he wrote on The Hill's Congress Blog, "requires that a Constitutional amendment requiring a balanced budget be passed by congress and sent to the states for ratification before any increase in the debt ceiling goes into effect."

The bill also makes it very hard for the government to raise taxes, requiring a two-thirds majority in both the House and Senate. So basically this all would mean unprecedented, pretty much implausible cuts to everything.

Now, none of this really matters since the bill will almost certainly fail in the Democrat-controlled Senate and President Obama has already vowed to veto it if it gets to his desk. But Akin and his colleagues know this. They're just trying to send a message.

It is election cycle, after all, and Akin is in a high-profile Senate race for Claire McCaskill's seat. (And McCaskill has already gotten her hands dirty in the debt ceiling debate.)

On scale of Huntsman to Bachmann, Akin is far-to-the-Bachmann and he wants Missouri voters to know it.