Sick of feeling like a scapegoat and a punchline, Akin has back in a big way. His book, Firing Back: Taking on the Party Bosses and Media Elite to Protect Our Faith and Freedom, comes out tomorrow, and Akin is promoting it by talking about rape, using the word "legitimate" and taking back his apology for his notorious 2012 remarks.

In the book, Akin says he regrets apologizing for his "legitimate rape" comment in this awkwardly earnest YouTube video titled "Forgiveness:"

"My comment about a woman's body shutting the pregnancy down was directed to the impact of stress on fertilization," Akin writes, according to the Daily Mail. "This is something fertility doctors debate and discuss. Doubt me? Google 'stress and fertilization,' and you will find a library of research on the subject."

Not only should he not have apologized, but leading Republicans at the time, including presidential nominee Mitt Romney, Senator Roy Blunt and GOP operative Karl Rove should have defended him, Akin writes.

"By asking the public at large for forgiveness, I was validating the willful misinterpretation of what I had said," Akin writes, according to an early review from the Washington Post.

Romney in particular should have used Akin's comments on rape and pregnancy -- that "the female body has ways to try to shut that whole thing down" -- to turn on the Democrats, especially former President Bill Clinton, he writes. 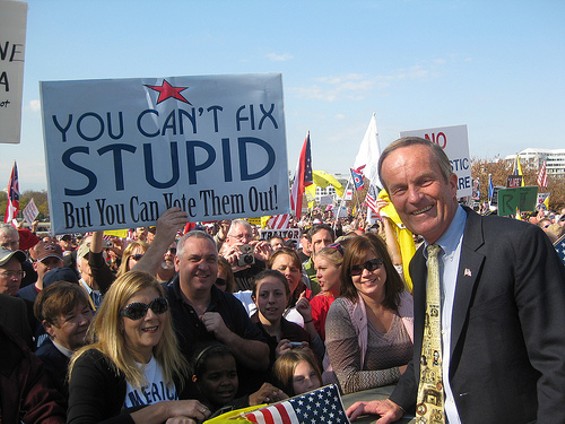 via
It's a good lesson to learn, Rep. Akin.

So far, Republicans aren't buying it.

"Todd Akin has no one to blame for his loss but Todd Akin," Kevin Madden, a former senior adviser to Romney, tells Politico. "Anyone looking at the question reasonably would conclude it doesn't make any sense for a former candidate to just assign blame to a long list of rattled off names. Mitt Romney, from Massachusetts, won Missouri by 10 points. Todd Akin lost by 16 points. It's fairly simple."

Akin accuses Blunt of leaving a "bloody war club with his fingerprints all over it" to get Akin to exit the 2012 Senate race against eventual winner Claire McCaskill. Luckily, Blunt's spokeswoman Amber Marchand offers the best response ever, via Politico:

Sen. Blunt appreciates the service Todd Akin has given to our country and the service his sons continue to give. He thinks Congressman Akin is a good man and well-intentioned, but based on what he has heard about the book, Sen. Blunt has decided not to read it.

But Akin isn't just writing about rape anymore. He's also talking about it a lot, especially when it comes to a rape case former First Lady Hillary Clinton worked in 1975 as a defense attorney.

In previously-unheard tapes leaked online last month, Clinton laughs while discussing how she managed to get just a one-year prison sentence for a 41-year-old client accused of raping a twelve-year-old.

"It is incredibly hypocritical that Hillary Clinton would carry on about an imagined 'Republican war on women' when she once got a child rapist off the hook who she knew to be guilty, and laughed about how she did it when interviewed," Akin tells the Daily Mail. "In the process, she de-legitimized the legitimate claims of the 12-year-old victim and then slandered the victim to justify her tactics."

Daily RFT can't explain why someone on Akin's new communications team forgot to tell Akin that America cringes every time he uses the word "legitimate," so instead, we're just going to remember the time we made Akin out of bacon: