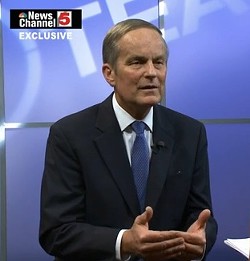 via ksdk.com
A legitimate comeback?

"Could Todd Akin be the new comeback kid?"

KSDK (Channel 5) seems to answer its own (pretty ridiculous) question with its much hyped, underwhelming interview with the former Missouri congressman who destroyed his Senate campaign by saying, "If it's a legitimate rape, the female body has ways to try to shut that whole thing down."

The station promoted the exclusive as an interview about his "comeback," -- tweet your comments with hashtag #AkinComeback! -- but were the hints of new political ambitions legitimate? Check out the video below.

First shocker of the interview: He regrets the comment that ruined his campaign and destroyed his reputation! Ya don't say?

"I've relived that moment many, many times," he says, adding, "Of course you regret it. You think what would it have been like if I hadn't done that?"

"All of us are fallible," he also says during the interview.

And does he believe in that whole legitimate rape thing?

Akin replies, "No, no and I apologized for that."

After he offers some insight on the future of the Republican Party, we get to the money question -- the "comeback" in their headline and teasers.

"Would you ever consider putting your hat back in the political ring again?" reporter Leisa Zigman asks.

"I don't rule anything out. I consider it kind of a bright new future and I'm interested to see what the possibilities are," he replies.

There you have it, folks. The #AkinComeback.