Send a News Tip
Spring training is officially underway, with real, no-foolin' games being played and everything. The beginning of a long, twisty road that leads through summer and into autumn, hopefully ending late in October with a nice, new piece of hardware to add to the trophy case at Busch Stadium.

At the very least, it promises to be an interesting season, one which will likely go a long ways toward deciding how the fan base views the Cardinals' new-found commitment to a build-from-within philosophy. In fact, interesting may not be a strong enough word; fascinating may be better. Perhaps compelling. Maybe even, dare I say it, riveting. Yeah, let's go with that. Riveting.

Speaking of riveting, we don't really even have to wait for the season. We've got some of the most fascinating story lines imaginable going on right now, right here in spring training. Injuries, positional competitions, and players just trying to build on last season's performances are just some of the things you may want to pay attention to this spring as you follow the Redbirds' flight toward opening day. Here's a little checklist to help you keep track.

flickr.com/photos/shgmom56
Lohse
10. Kyle Lohse: emerging star or one-year wonder?
After last season's performance, when he won eighteen games and served as the club's de facto ace while Adam Wainwright was on the shelf with a finger injury, Lohse signed a big new four-year deal with the Cardinals. In fact, he was the only big signing the Cards made, and the pressure will be on Lohse to prove he was worth it. Known as an underachiever during his career, it finally looked last season as if Lohse was ready to live up to his considerable potential. Whether or not he does so in 2009 will go a long way toward deciding how his new contract, signed well before free agency began, will be viewed. 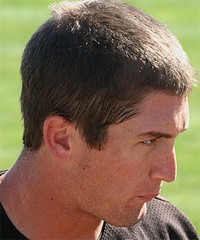 flickr.com/photos/gadgetcat
Freese
9. The hot corner competition
When Troy Glaus suddenly underwent shoulder surgery just a few weeks back, it opened up an interesting opportunity for a couple of players to make their case for playing time. David Freese and Brett Wallace, the top two third basemen in the Cardinals' minor league system, were both given lots of ink, but the move of Joe Mather over to third early in spring training has really added a new element to the competition. What's really interesting about the Mather inclusion is that he directly benefits from a more positive prognosis for Glaus. If Glaus looks to only miss a short bit of the season, say, two weeks or so, Mather would likely get the call to fill in temporarily. If Glaus is going to be out a more significant chunk of time, a month or more, Freese, as the more natural third baseman, might have the inside track on the starting assignment. So we get not only a great competition, but a possible indication of just how much time Glaus is looking at on the shelf.

flickr.com/photos/madmannova
Chris Carpenter
8. Carpenter's arm: The second most important appendage in Florida
We all know what's at stake with Chris Carpenter and his health. As goes Carpenter, so goes the rotation. If Carp is healthy, the Cardinals suddenly have one of the most imposing starting rotations in all of baseball; if he isn't, it quickly begins to look like Mozeliak and Co. badly miscalculated in not signing another free agent pitcher. So far, everything seems to be going well for Carpenter in his bid to return to prominence, but I'm sure we'll all be holding our collective breath for quite a while on this one.

Colby-Rasmus.com
Colby's Web site...
7. Colby, Colby, Colby
The Cardinals' consensus top prospect three years in a row, Colby Rasmus looks to have a pretty good chance to make the club this year out of spring training. Even so, there are tons of question surrounding the young outfielder. First, will he make the club? Second, if he makes the club, where will he play? Third, is he makes the club, where does he hit? Fourth, if he doesn't make the club, why not? And, possibly most worrisome of all, if he doesn't make the club, are we going to be forced to live through another summer of his father making news with his incessant message board douchebaggery?

flickr.com/photos/rosepetal236
Pujols
6. Albert's arm: The most important appendage in Florida
It's interesting to look back at all the press that Albert's elbow got in spring training last season, and then look at the way it pretty much all just disappeared by the time the season reached its waning days. Metronome-like performance will do that to you, I suppose. Once again this spring, though, we look around and find ourselves face to face with the knowledge that Albert Pujols, the best player in baseball right now, has an elbow that is, at the very least, worrisome. He had surgery during the off-season to transpose the nerve and alleviate the pain, and so far the reports have all been positive. Still, you see your franchise player wearing one of those over-sized ice and compression sleeves following workouts, and you have to be a little bit scared. And by a little bit, I mean absolutely shitless.

flickr.com/photos/dirkhansen
La Russa
5. The Tony Factor
This may or may not be Tony La Russa's last season as the manager of the St. Louis Cardinals. No, really. It could be. Okay, I know. We've heard this little song and dance before. Nonetheless, there still is the chance that TLR could be on his way out of town come October. And where better to start looking for clues than spring training? La Russa has outspoken in his desire for help from the front office; so far, that help has yet to really materialize. I think we may all want to look at the way Tony conducts himself this spring in press conferences and the like. If he seems reenergized and excited, the way he did last year, then maybe we see him frowning his way through a few more seasons here. On the other hand, if the team just doesn't look to be shaping up the way that TLR hopes, and still no help seems forthcoming, then... 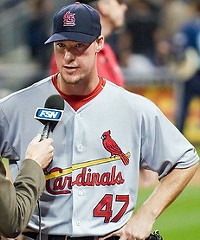 flickr.com/photos/dirkhansen
Ludwick
4. Ryan Ludwick:  Also see Lohse, Kyle
Ryan Ludwick, proud owner of a few hundred major league at bats and nearly as many surgeries, suddenly blossomed last year into an elite power hitter and MVP candidate last year at nearly 30 years of age. The team's primary cleanup hitter for most of the year, Luddy was one of the biggest reasons that the Cardinals' offense was able to pile up the runs on a daily basis. (Well, except for when they would leave 15-20 men on base. Those days, not so much.) Much like Kyle Lohse, Ludwick now faces the question of whether or not he'll be able to replicate that performance going forward. If he does, the offense should look mighty imposing once again this year. If not, the Cards are going to have to hope for a step-up contribution from another player somewhere along the line if they want to avoid a significant downturn with the bats.

flickr.com/photos/twonickels
Perez skips out to the field.
3. Closing doors, closing games
More words than you would probably believe were spent this offseason debating the Cardinals' pursuit of Brian Fuentes, the former Colorado Rockies closer. Fuentes would stabilize the bullpen, giving the Cards an imposing back end to help shorten games, the argument for Fuentes went. He's overpriced and only a marginal upgrade at best, went the argument against, also known 'round these here parts as my side of the argument. Regardless, the Cardinals come in to camp with two rookies, Chris Perez and Jason Motte, competing to earn the team's closer spot, along with Ryan Franklin (I just threw up in my mouth a little bit), and possibly Kyle McClellan as well. If the Cards want to avoid another bullpen meltdown this year like the one they had last year, it's going to have to begin with whoever earns the right to take first crack at nailing down leads.

flickr.com/photos/dirkhansen
Greene in 2008.
2. It ain't easy being Greene
Last year, we saw outstanding glovework at shortstop, offset by one of the weakest bats in all of baseball, courtesy of Cesar Izturis. Over the offseason, the Cardinals tried to upgrade the position by trading for the San Diego Padres' former phenom turned strikeout artist Khalil Greene. Greene was one of the most exciting young players in all of baseball just a few years ago, an outstanding defensive shortstop with power to burn. Recently, though, Greene's plate discipline has almost completely evaporated, leaving him struggling to stay above the Mendoza line. The Cardinals dealt away malcontent reliever Mark Worrell and a player to be name later for Greene, hoping to see him turn himself around and regain the form that made him an emerging star in 2004. If he does, the upgrade to the offense could be huge. If not, well, at least we can make plenty of Spicoli jokes.

flickr.com/photos/lscan
Schumaker
1. The Great Schumaker Experiment
So far, this has been the biggest story of camp and, in my opinion, rightfully so. Not just because what Skip Schumaker is trying to do (converting from the outfield to middle infield), is so unprecedented, or even because it may end up determining what the Cardinals have at second base for several years. To me, the reason that this story is so remarkably important is because it could well function as a referendum on both Tony La Russa and the Cardinals' front office.

The reason that Skip is trying to make this transition, after all, is largely because TLR simply couldn't stand to have Adam Kennedy around anymore. Mozeliak tried to trade Kennedy, but found no takers, and eventually decided to just release the disgruntled second baseman outright. Along with the departure of Aaron Miles and the suckitude of Brendan Ryan, the Cardinals find themselves in camp with no real candidates to play second base this year outside of Skip Schumaker, the human guinea pig. If it works, La Russa and Mr. Mo will be hailed as geniuses for their outside-the-box thinking. If it all falls apart, and the Cardinals end up with a gaping hole at second base all year, not only will La Russa's inability to get along with a player garner a lot of criticism, but Mozeliak's credibility will be called into question. People will question whether or not Mozeliak has the testicular fortitude to stand up to TLR, as well as the decision-making acumen to build a winning team.

For better or for worse, the 2009 season may very well end up being defined by a career outfielder trying to turn himself into a second baseman. And yes, that scares me just as much as it does you.