Send a News Tip
Friday! Instead of a written intro, I'm about to get all multimedia on your ass:


Now then, onto some affordable things in the Lou', tonight through Sunday (Looking for weekend concerts? click here.):

Transference, Large & in Charge and Sans le Motif at ArtDimensions (Friday)
The ArtDimensions galleries (1214 Washington Avenue) host three brand-new shows tonight. In addition to the works, there will be good eats and music. A donation of $10 is suggested. Alison Sieloff has more details.

View images of animals in zoos at a powerful new exhibit, opening Friday at the Sheldon Art Galleries.
Of Animals reception at the Sheldon Art Galleries (Friday)
Frank Noelker visited more than 300 zoos to photograph the animals that live in them. "There's nothing grisly depicted in them, no slaughterhouse expose or safari aftermath. The horror is generated from within the viewer," writes Paul Friswold, about Of Animals: Photographs by Frank Noelker. The exhibit opens tonight at the Sheldon Art Galleries for a free public reception from 5 to 7 p.m. More details.
Yowie at Lemp Neighborhood Arts Center (Friday)
After a four-year drought in which the band has not played St. Louis, it returns, and for $5 no less. And so writes Calendar Editor Paul Friswold: "The two-guitar (Jeremiah Wonsewitz and Jim Hagerty), one-drummer (Shawn O'Connor) beast isn't something to be dismissed lightly. In fact, it's the kind of band St. Louis deserves: intelligent, defiant musicians committed to the idea of writing original music that demands you pay attention -- to actively be part of what they're playing instead of talking or texting or fingering your anus." More details. 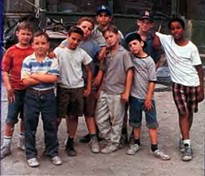 The Sandlot: D'awwwwwwww. See it outside on Friday.
Old Orchard Gazebo Series at Gazebo Park (Friday)
Watch The Sandlot and kneel under the crushing weight of summer traditions -- baseball, kissing, running from large dogs and skidding on bikes -- all in the summerific suburb of Webster Groves. "You're killing me, Smalls." More Details.

Ansel Adams in Yosemite at Gallery 321 (Saturday)
Gallery 321 -- located inside the Saint Louis Art Museum in Forest Park -- opens its newest exhibit tonight, a collection of nine photographs shot by Ansel Adams. The original prints, which date back to the '60s, display scenes from Yosemite National Park, an American Eden that Adams defined through black-white-photographs throughout much of the past 100 years. Nicole Beckert has more about this gallery opening.

Mini Golf! (Saturday)
Yes, that's the title for this blurb because the wordy "Jobs and Employment Support Services' Miniature Golf Tournament and Hole-in-One Contest" is a bit too long. However, for $10 you can play at Tower Tee (6727 Heege Road, Affton), starting at 2 p.m. -- for a good cause. Please, read more details here -- and bring your own putter if you wish.

After Santigold, hit up the free after-party at the Halo Bar.
Santigold/MSTRKRFT After-Party at Halo Bar (Saturday)
Not enough money to pay the $18 price to see Santigold? Never you mind, the after-party isn't a well-guarded secret like some, it's at Halo Bar (located in the Pageant, right where the Santigold and MSTRKRFT concert gets down.) Plus, you'll arrive sweat-free while you mingle with people who have just danced for the past two hours. Advantage: you. More details.

CWE Art & Taste (All Weekend)
The Central West End hosts the 15th version of the CWE Art & Taste, a weekend-long street fair which begins at 5 p.m. Friday, runs from 11 to 11 on Saturday and from 11 to 5 p.m. on Sunday. There are always dozens of artists, food opportunities aplenty and live music. As with many street fairs, it's free to get in, but you'll need some dough to partake in the food or drinks. More details.

"The Highland Jaycees sponsor the annual Homecoming celebration called the Schweizerfest, celebrates city's Swiss heritage. There will be a huge assortment of foods, beverages, rides, & games on Saturday and Sunday. There will be a large parade on Saturday and Sunday evenings. There is also a live band for Friday night with beer, soda, and brats available. Come join the fun!" More details.