I didn't make it to the Pink Galleon over the weekend to try my hand at the new Wheel of Fortune pinball game, but my guess is that John Miller, a.k.a. "JR," still holds the high score.

As of Thursday afternoon, that was about 258 million. Miller says he had a good strategy think that day on his way home from work, so he swung by the Galleon for a rematch. 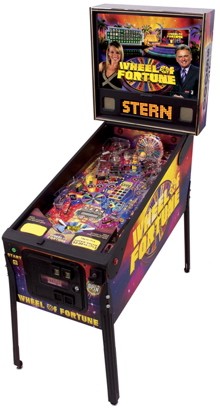 "I've dumped more money in that game than I've dumped into a game in a long time," Miller told me that evening.

Miller is one of the pinball aficionados I profiled back in December. He and his buddies, Steve and Carol Walker, Brian Bannon and Adam McKinnie (a.k.a. "Zed"), have been brushing up on their skills ahead of an international tournament next weekend in Las Vegas.

The tournament is sponsored by the International Flipper Pinball Association, the same group that created the World Pinball Player Rankings. The rankings are a fairly new development in competitive pinball. Much of a player's standing depends on how often he or she competes in sanctioned events. Miller, for example, is ranked at 25, while McKinnie stands at 101. Two weekends ago McKinnie held the high score on Pink Galleon's Wheel of Fortune, 148 million to Miller's 143 million. "He's a better player than what his ranking is," Miller says.

If you're interested in becoming a world-ranked pinball player, your chance is coming up. CP Pinball in South Roxana, Illinois, will hold its first sanctioned tournament on April 5. The entry fee is $20. Qualifying rounds run from noon until 5 p.m. Playoffs begin after 5 p.m. (There are no cash prizes.)

The competition will be mostly local, but unfortunately that does include JR. For someone who calls himself "pinball wizard," he doesn't harbor many secrets about his sorcery. If you want to save yourself a few quarters on Wheel of Fortune, Miller recommends going for the right-side drop targets on the first shot, then trying to hit the left and right ramps consecutively.

Released last fall, the pinball version of Wheel of Fortune might be more fun than watching its namesake game show for the gazillionth time. Miller reports that it comes with an engaging, complicated set of rules. "It's a throwback, playfield-wise, to the early '70s, late '60s. But technology-wise, it's awesome."