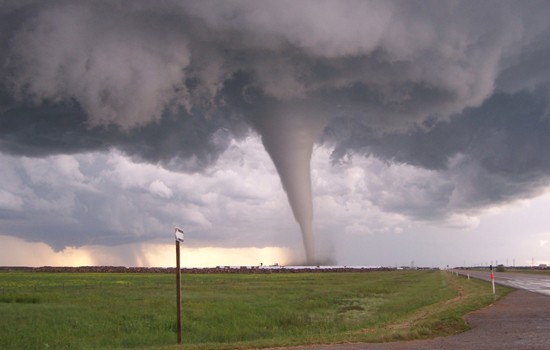 Not the actual tornado that struck Joplin, Missouri, yesterday afternoon -- but pretty scary, too.

So the world didn't end on Saturday.

But residents of Joplin, Missouri, could have been forgiven for wondering yesterday if the apocalypse was merely a day late. A tornado ripped through the town in the state's southwestern corner yesterday afternoon, killing at least 89 people and causing significant damage to St. John's Regional Medical Center.

The city manager told reporters that the tornado's path was an astonishing six miles long and a half-mile wide -- and hit the center of town. The hospital reportedly suffered a direct hit.

Phone service to Joplin was still down as of last night, and officials worry that the fatalities there may actually be much higher. Last month, nearly 300 people were killed when a series of tornadoes struck Alabama and other southeastern states.

A tornado also struck Minneapolis yesterday. So far, one person has been reported dead.

A tornado previously struck Joplin in May 1971. Despite reportedly touching down near the center of town and sweeping through 40 city blocks, that twister only killed one person. Another 50, however, were injured.

We'll have more on this devastating story when we know more. In the mean time, here's the website for the American Red Cross' Greater Ozarks Regional Chapter, which includes Joplin.