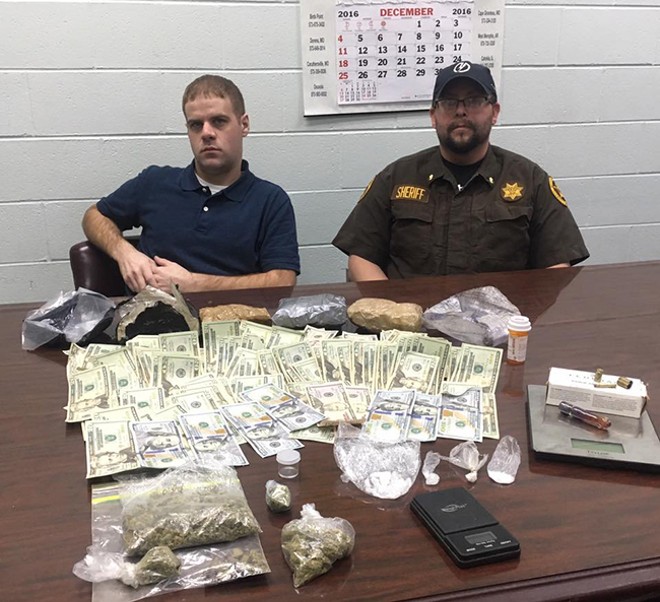 After Sanders' death, he told the Riverfront Times in an email that Sanders had become "combative" and had "seriously injured six officers before he could be restrained." All of them had to be hospitalized, he claimed.

Hutcheson has not responded to additional questions from the RFT, but he reportedly sent text messages to KFVS 12 news anchor Kathy Sweeney after Hawley announced plans to investigate the incident.

"I wish you would ask Hawley how the six officers hospitalized that night are doing," he wrote, according to Sweeney. "Were they able to re-attach the jailer's thumb? How'd the other jailer's shoulder surgery go?"

The state attorney general toured the jail after the May 5 confrontation and asked a judge for a writ of quo warranto — a rarely used legal maneuver to strip the sheriff of his office. Within hours, Judge William Syler granted a temporary order that barred Hutcheson from entering the sheriff's office and installed Parker, the coroner, as the acting sheriff.

Parker tells the RFT that the work of the sheriff's office is still getting done, despite the ongoing turmoil. He even has a full staff, a fact that might seem surprising given Hutcheson's comments about severed thumbs and shoulder surgeries.

"No one was to the point where they can't work," the coroner says.

Hutcheson is hoping he can return to work, too. His attorneys have called the attorney general's bid to have the sheriff removed from an elected office a "drastic" move that will not hold up in court. While he awaits a decision, Hutcheson has stayed mostly quiet, aside from rallying supporters online and posting a few jabs at Hawley.

"Upon taking office, I did exactly what I promised I would do," Hutcheson wrote on Facebook, "and I will fight the state's heavy handed bureaucracy with that same resolve. While the wheels of justice may move slow, I am confident we will prevail."

In case his message was not clear enough, he later switched his Facebook cover photo to an image of chess pieces.

"They're not playing fair so they have an early lead," he wrote. "I'm looking to the end game & know I'll prevail."

He is fighting a multifront battle. He has hired Blitz, Bardgett & Deutsch, which has offices in Clayton and Jefferson City, to challenge the suspension of his law enforcement license and the order forcing him out of office. Cape Girardeau attorney A. M. Spradling III is defending him in federal court against the civil suits. And he has retained prominent St. Louis defense attorney Scott Rosenblum for the criminal case.

In a flurry of filings, his lawyers have contested all the charges against Hutcheson.

For his part, Hawley has asked a judge to revoke Hutcheson's bond as a result of Sanders' death. He describes the county's former top cop as a "danger to the community" who needs to be locked up.

"Three people have died at the Mississippi County jail on his watch," Hawley says in a statement. "The court should act now, by revoking his bail, to prevent further tragedy and any interference in our investigation."

A hearing on the request has been set for June 22. Hawley says his office is conducting a criminal investigation into Sanders' death, and he has hinted that he is reviewing numerous other incidents linked to Hutcheson. In court filings, the deaths of Rhodes' baby and Nunnally were both listed among the reasons to remove the sheriff from office.

"We are learning about troubling events and troubling actions regarding Hutcheson all the time," Hawley told reporters at a news conference. "We're looking at all that very carefully."

Natasha Nance says her nephew was a "jokester" who liked to spend time with his eight young children. They recently all spent Easter together.

"I tell myself it's like a dream, like a bad dream I have to wake up from," she said during a May 10 news conference in Nashville. She sat beside a pair of attorneys and leaders from the local chapter of the NAACP. They were already suspicious about the circumstances of Sanders' death, but the accusations swirling around Hutcheson have made them skeptical of everything they hear out of Mississippi County.

NAACP leaders say they're worried people will try to make Sanders seem like a monster — violent, frightening, powerful — instead of a lone man in a cell.

"One of the things we've been concerned about is there seems to be a prevailing attitude to dehumanize, particularly black males, to make it easier for people to attack them, to kill them, to brutalize them," Clyde Poag of the NAACP says. "You hear code words like, 'He looked like the Hulk.'"

Online in Mississippi County, it had already begun. Hutcheson's supporters started sharing a February 2016 news story out of Nashville in which police accused Sanders of resisting arrest and threatening an officer's family during a traffic stop. There does not seem to have been a follow-up story, but online court records show Sanders ultimately was convicted of four misdemeanors.

There were also the Facebook posts from the Mississippi County jail's nurse, Emily Brown, written in response to criticism of Hutcheson. She claimed Sanders possessed "super human strength," almost certainly fueled by the "drugs he had consumed."

"I have never seen anything like the rage and strength that this man presented," wrote Brown, who was hired by Hutcheson. Brown has since deleted her posts.

Around the county, this version of a superman able to shrug off Tasers and pepper spray as he throttled at least a half-dozen cops and jailers has taken hold among Hutcheson supporters. They suspect their sheriff is the victim of a conspiracy, or at least a politically ambitious attorney general. Even as the county prosecutor has acknowledged the allegations against Hutcheson are serious enough to warrant review of the cases he built, and that some will almost certainly have to be thrown out, he continues to find support.

On May 18, nearly two dozen Hutcheson backers took seats in the Charleston library, having persuaded the local TV station to listen to their thoughts on the controversial sheriff. They had printed "INNOCENT UNTIL PROVEN GUILTY IN A COURT OF LAW" on sheets of white copy paper for the occasion and designated two women to speak for the group.

They are certain of several things: Hutcheson was cleaning the streets like never before, media coverage has been one-sided and they need their sheriff back. Toward the end of a 28-minute amateur video recording of the interview, the reporter asked specifically about allegations that Hutcheson had personally played a role in the final confrontation with Sanders.

One woman declined to answer, saying she was not there to know what happened. The other, Alberta Bishop, decided to weigh in.

"I think Cory is the one that, if he was needed, if he was seeing his fellow officers being beaten up, their thumbs torn from their body, anybody would help," Bishop says. "If he used a Taser, more power to him."