Tough Times Ahead for Cardinals Pitching

When the Cardinals signed Ryan Franklin to a two-year extension in August of last year, the club believed it had shored up its setup slot for the next couple of years. Franklin was in the midst of a spectacular season then, pitching the eighth inning ahead of Jason Isringhausen, with an ERA that hovered below the 2.00 mark for a large portion of the season. Some of us, though, were less than enthusiastic about the move.

On Tuesday night, in the Cardinals' postponed season opener, the 35-year-old Franklin took the loss after giving up two runs -- though both were unearned -- without recording a single out. It's far too small a sample size to assign any significance to this one rough outing, but there are some disturbing trends that point to more of these tough nights ahead for Franklin and, hence, the Cardinals. 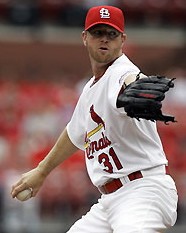 Pretty straightforward, right? There are two stats up there you may not be familiar with, BAA and BABIP. BAA is Batting Average Against, and it just means the average that all hitters combined to hit off of a given pitcher; in this case, Ryan Franklin. The walks and strikeouts are presented as percentages of plate appearances.

BABIP is a little more complicated but very important to understand. BABIP stands for Batting Average on Balls In Play. This particular statistic is a measure of how many of the balls put in play against a pitcher turned into hits. This includes everything except home runs, walks, strikeouts and errors.

The reason this one is so important to know is because it tells you, essentially, how lucky or unlucky a pitcher may have gotten. Once a ball is put into play, the pitcher has virtually no control over whether it becomes a hit. He can field his own position, yes, but he is essentially dependent on his fielders to turn the ball into an out rather than a hit. A ton of research has been done on this subject, and it all points to the fact that there is a baseline level for BABIP that most pitchers fall into. A very small number of pitchers have shown a consistent ability to depress that number a bit, but even then, only by a small amount.

The point of all this is this: The average Batting Average on Balls In Play is right around .290 to .300. Pitchers with unusually good movement on their pitches, who are able to induce weaker contact than some others, can sometimes maintain a BABIP more in the .270 range. That's really the best that a pitcher can do, though. After he releases the ball, the only control a pitcher has over what happens is if the ball happens to be hit directly back to him. Otherwise he has to rely entirely on his defense.

So take a look at how Mr. Franklin stacks up against those expected numbers: .251. You'll notice immediately that his BABIP is far, far below what is a normal range. Also, his strikeout percentage is extremely low. This presents a problem, because if you aren't striking out a ton of batters, then lots of balls are being put into play. Last season Franklin was the beneficiary of unusually good luck. He helped himself out quite a bit by being very stingy with his walks, but he still just didn't miss many bats. He also gave up a ridiculously low number of home runs. This is partially due to good pitching, but again, he may be due for a bounce back up on his HR rate.

All of this points to a pitcher that is probably due for a serious downturn. The Cardinals' infield defense this year, particularly in the middle, should be slightly stronger than it was last year, helping to cushion the numbers a bit. However, a BABIP as low as Franklin's was last year really isn't sustainable. Most likely, that number will regress toward the mean, meaning that his BABIP is bound to move back toward the usual range, and when it does, Franklin's ERA is going to rise significantly.

Even if Franklin maintains his ridiculously low rate of bases on balls, his low strikeout percentage, coupled with a larger number of balls in play becoming hits than last season, is most likely going to result in a much larger number of runs allowed. We saw the beginnings of these problems in the second half of last season, when Franklin had a 5.25 ERA and allowed six of his eight home runs. All of his other statistics stayed approximately the same, but the "luck"-based ones went up, and his overall performance suffered tremendously.

Last year Ryan Franklin pitched very well. He kept his walks to a minimum and made good enough pitches to get batters out consistently. But if you look a bit closer, his great season also had an awful lot of smoke and mirrors involved, and that can't go on forever. I fear we may be in for a very long season of watching Ryan Franklin trying to hold on to leads for the Cardinals.