Traveling Across Missouri With a Backpack, Camera — and No Car 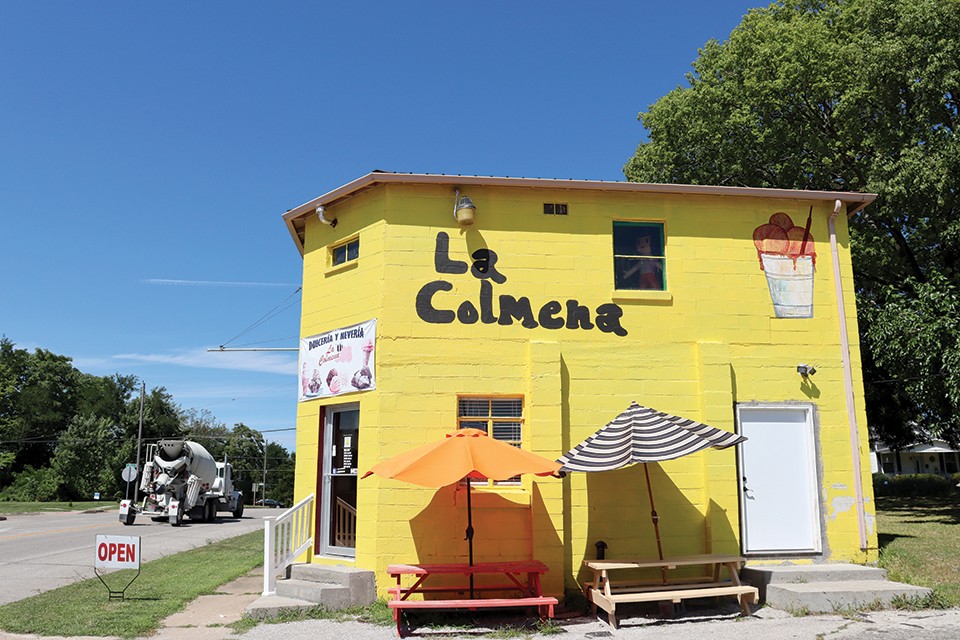 After a stroll through the Governor's Garden, we arrived at the white stone basement that is Jefferson City's Amtrak station about a half hour before our train was scheduled to leave. As we rounded the corner, we were greeted by a gaggle of bags and their owners, sprawled about the benches. A Union Pacific freight train, unbeknownst to me, had taken our River Runner's place on the westbound tracks, owned by the Union Pacific Railroad.

But when the clock struck 12:21 p.m., rather than boarding a passenger train, I was talking to Eric Sims, who was standing outside, staring in the distance as if he could will the freight train to move by concentrating. A 1986 Mizzou graduate, he had just dropped off his daughter for her senior year at his alma mater. She, of course, kept the car they had driven. He laughed, explaining that she'd bought him these train tickets home to Bolingbrook, Illinois, a southwest Chicago suburb. He couldn't board the eastbound train to St. Louis, his connection, until the Union Pacific freight train got going.

The yellow freight cars sat on the tracks, perhaps glued there by the summer heat, their black wheels like flies stuck in a vat of honey. I had been looking forward to our next stop at the state fair, passing on lunch to save room for its assortment of fried goods and hoping to try some Rocky Mountain Oysters.

"Is there hope?" one woman asked.

Eventually, after several more new estimated arrival times, the Union Pacific's caboose passed. I was buying the cheapest bag of Sun Chips ever (59 cents) and getting to know the other volunteer behind the counter, who runs the place with her husband.

"I've always liked trains," she said. "And it was something we could do together."

I didn't even know the train had arrived until I heard a whistle around 1:20 p.m. By 1:45 p.m., more than two hours after our original departure time, I was aboard.

In coach, there are two cushioned seats on each side of the aisle. It is not the most comfortable place to spend several hours, but they do recline slightly. And not too many people were riding Amtrak in the middle of a week late in the summer, so my friends laid across both seats to sleep.

An hour later, I was standing in the Sedalia Amtrak station, more than three miles away from the state fair. Having already lost two hours from the delay, walking seemed out of the question. I broke down and dialed the advertised number for "transportation services." Voicemail. My friends were slouched across the wooden row of chairs and seemed even more weary of this car-free social experiment. One of them found a taxi service, called one and we waited. Luckily, we had enough cash to pay for the cab. Once again, traveling without a car was proving difficult, and the reality was that — unlike a lot of people — we were fortunate enough to be able to opt out simply by making a phone call.

After a brief wait, a cab pulled up and we got in. With a Christian rocker singing "Hallelujah" from the speakers, the $10 taxi took us to the state fair. 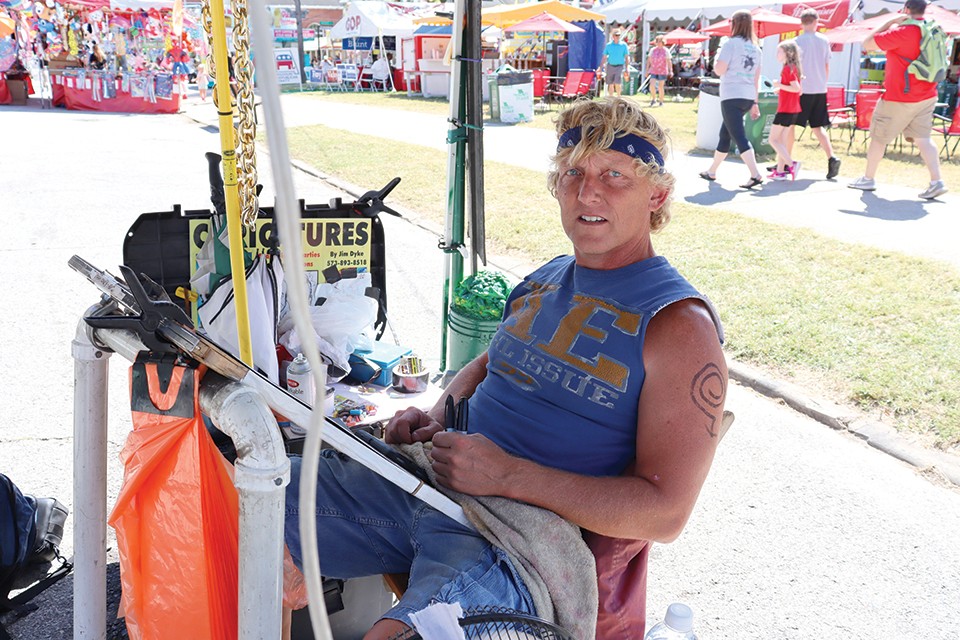 JAMES POLLARD
Jim Dyke takes a vacation from his day job every year to paint caricatures at the Missouri State Fair, where his running commentary is as entertaining as his artwork.

Fairgoers strolled under rainbow umbrellas at the gates and into a field of tents. All sorts of smells met my nose. All sorts of tastes touched my tongue. And all sorts of people passed me by. As I would soon discover, the late-arriving train was a blessing in disguise: I would not have known what to do with six hours at the state fair.

As I navigated that field of tents, Jim Dyke and his caricature booth caught my eye. He has been accenting people's features for 26 years at the fair, taking a vacation from his job as the editorial cartoonist for the Jefferson City News Tribune. During those years, the self-taught caricature artist has had countless people sit for a portrait, including Sheryl Crow and maybe Dolly Parton.

His sign says that if you're really ugly, he'll draw you for free. The owner of an African grey parrot named Lindbergh, he certainly has a way with words, describing the Missouri State Capitol Building, currently under construction, as the one "with the giant condom on it."

During the next four hours, a fried Snickers bar made its way into my mouth. I paid $8 for a freshly squeezed strawberry lemonade that consisted of freshly squeezed lemons pumped with red juice. I paid $9 for a monstrous skewer of chicken.

I entered the pigsty and promptly left the pigsty. After hiking through an orange and yellow forest of tractors, I attended a bluegrass concert. I watched the bizarrely quirky due Allez Oups, composed of "Rob from Chinatown" and "the mistress of gravity," Ms. Jane from Ukraine, balance plates and walk across wine bottles.

As I left the state fair, I passed back by Dyke's caricature tent. Remembering I still had one more question for him, I walked over.

"Would I have to pay for my caricature, or would it be free?"

Whether he meant it, or knew that compliments are good for business, I can't say.

After a detour through a large sales tent, under which I had my left shoe cleaned and my odds of reaching eternal life called into question, we called the taxi. While choruses of hallelujahs played on our way there, what sounded like a personal rap mixtape recorded in a mid-Missouri basement played on our way back.

The taxi dropped us off right outside the train station, across the street from a small store. When we first arrived hours earlier, the store, brightly painted yellow with a blow-up Dora in the window, caught my eye. We still had some time to kill before the next train, so I crossed the street to check out La Colmena. Linda Leon sat behind the counter, a picture of her late mother on the wall. It had always been her mother's dream to own a store with candy and party supplies. So on April 1, 2017, her father and siblings opened the shop, with most of its candy imported from Tijuana, Mexico.

Leon's parents are from Mexico. She was born in Washington, Missouri, and has lived in Sedalia for most of her life. And while business started slow, with little advertising outside of Facebook and word of mouth, she says it's picking up.

"It's a nice, quiet place to live," she said. "For it being mainly Mexican candy, and, obviously, Mexican ice cream, we have a lot of different backgrounds, ethnic groups that come in."

JAMES POLLARD
David Gabriel, 19, sets off on a westward odyssey.

As I left Sedalia, I met a pink-haired cowboy. I leaned up against the wooden fence facing the tracks, awaiting the evening train for Kansas City. My shirt stuck to my back, a backpack filled with my clothes and camera hanging from my shoulders most of the day. David Gabriel, nineteen, approached me at the Amtrak station, a backpack sitting firm against his back, a military bag bearing his name by a bench.

He'd just been dropped off by a pickup truck and introduced himself. He had a slight Louisiana drawl, and he quickly began explaining his situation to me. I introduced myself as a reporter and explained I was traveling across the state without a car to write about what I found. He agreed to an interview and soon began telling stories, only to be interrupted by a whistle as we readied to get the train. Once aboard, he sat in the row across from me, explaining that he, too, is a writer, though he has his book written in his head. With a tattoo on his forearm of two nails forming the shape of a cross, surrounded by a crown of thorns, he later added that he is a certified preacher, though he admitted he doesn't always act like it.

He told me he was an orphan and lived homeless with his siblings as a child. Members of his family had been serving in the military since the Revolutionary War, save for his father, he said.

"My father wasn't that good," Gabriel said. "I saw how my grandfather lived his life, and I decided I wanted better than what he did, so I figured the military was best."

Those plans ended when he was discharged from Fort Leonard Wood for disabilities he didn't know he had. During his several months in basic training around St. Robert, he met a girl and says he fell in love. He had spent the past few weeks with her and her family at the Lake of the Ozarks. His girlfriend had dyed his hair pink after he failed to make some long jump.

That relationship fell apart when her ex-boyfriend showed up and he and the rival got into a tussle. Now Gabriel, who said he has been ranching since he was six years old, was headed west to work on ranches in Colorado and Utah, before reaching his final destination of Oregon.

He said his mother calls it soul searching, and he thinks everyone should make a trip like his. For Gabriel, life is all about memories. His favorite? The day he was adopted.

"How will you ever know where you belong if you haven't been to all the places you could belong?" he said, describing his trip west.

The teen, who once had a baby alligator named Elvis, said he doesn't fear death. "Trample the weak and hurdle the dead," they'd taught him at basic training, which he claimed was mentally challenging more than anything else.

While his nearly nine-month-long westward journey across the country was just beginning, I was entering the final 24 hours of mine. After a few less-than-respectful remarks about women and a brief lesson on chewing tobacco, we'd reached Kansas City.

"The best piece of thing I can give," said Gabriel, "is just don't ever let anybody tell you who you can and cannot be."