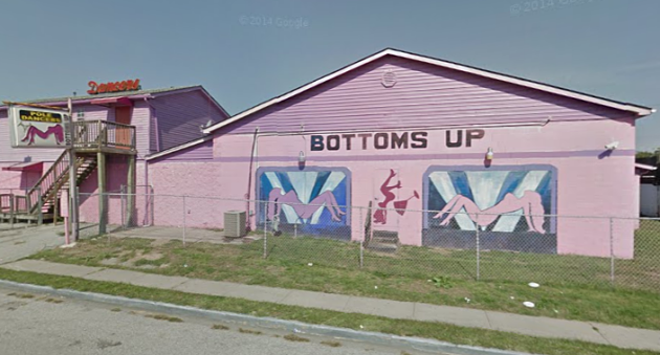 VIA GOOGLE MAPS
Police are searching for a suspect after three people were shot outside of a Metro East strip club in the early morning hours Thursday.

KMOV reports that the incident occurred around 4:30 a.m. outside of Bottoms Up Strip Club in Brooklyn, Illinois.

Brooklyn police say two women and one man were injured in the shooting. One woman was struck in the shoulder, another in her leg. The man was also shot in the leg, and his injury appeared the most serious, with Brooklyn Police Lieutenant Antonio White telling KSDK the man lost a "tremendous amount of blood."

All of the victims are in their late twenties/early thirties, KSDK reports. Their conditions have not been released.

Police have not yet identified a suspect or a motive for the shooting. They say they will be checking the surveillance cameras located outside the club.

Bottoms Up was the site of another shooting — this one deadly — back in December 2015. In that case, 26-year-old Tony Hampton received a 75-year sentence for first-degree murder after killing 29-year-old Salahudin Malik Robbins "execution-style" in the club's parking lot.