Tremor Time Again: Did You Feel the Earth Move?

There was a small earthquake early this morning along the New Madrid Fault. According to the U.S. Geological Survey, the quake took place in southeastern Missouri at 04:27:18 a.m.

The USGS earthquake site has some cool features, including maps like this one:

See that teensy blue square due south of Sikeston? (You might have to click the pic to view the full-size version.) That's this morning's quake. Those other, yellow squares are quakes -- one that was slightly bigger, at that -- that have transpired in the past week.

You can also get details about those recent quakes.

For a little perspective, here's the USGS map of all reported earthquakes in the past month or so:

There's also a feature called "Did you feel it?" that collects and displays info from the public. This morning's tremor probably won't generate such a report -- though I can tell you that at least one person (my wife) felt it here -- but the magnitude 5.2 earthquake that unsettled St. Louisans on April 18 did attract a lot of attention: 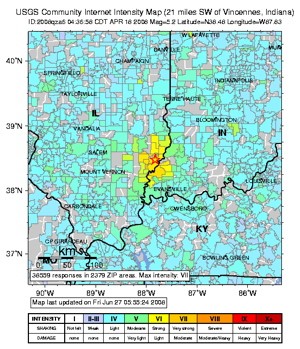